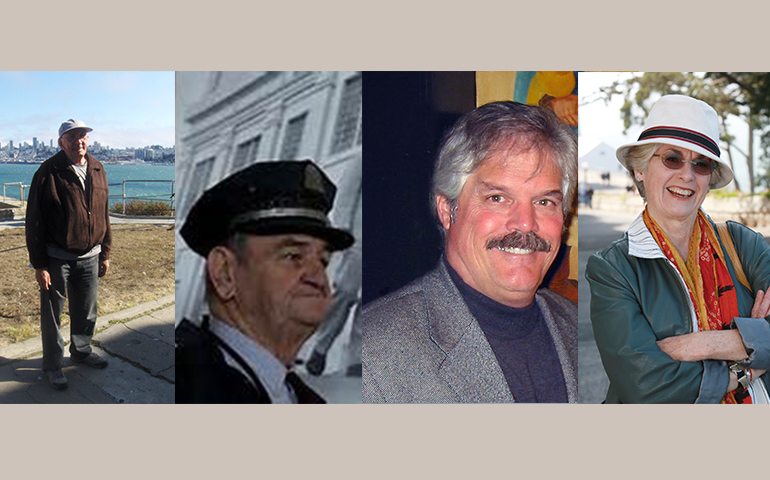 While there is continued debate about whether the Anglin Brothers successfully escaped from Alcatraz Prison in 1962, there is no doubt that there are survivors still around to talk about their time on “The Rock.”

To complement the “Alcatraz: Life on the Rock” exhibit at the Parc 55 San Francisco, the hotel is featuring a free speaker series with former “alumni” who will each deliver their individual stories about their experiences with the notorious prison.

Where: Parc 55 Hotel, 55 Cyril Magnin, San Francisco (next to the Powell Street MUNI/BART stations) In the hotel’s Cable 55 restaurant & bar
When/Who: Each of the speaker encounters will take place from 5:30-6:30PM

Former prisoner William G. Baker – AZ-1259
February 28 – 5:30-6:30PM
William Baker was an inmate at Alcatraz Prison. Baker was sent to Alcatraz because he was escaping from other prisons. According to Baker, “That’s the most serious rule of all in the penitentiary system…more serious than murder.” Baker reflects, “So, we were a bunch of hard-headed convicts before we got to Alcatraz. We had already been in the hole many times, broke a lot of rules. We were used to this kind of life before we got here. So, we could handle this place.” Baker continues, “I’m not saying Alcatraz was a good place. I’m just saying we were some bad boys. We could handle it and we did. We walked the yard laughing and playing, talking about robbing banks when we got out; we bet on ball games; played cards; played ball; and made a little home brew once in a while and got drunk.”

Former Guard Jim Albright and former resident Cathy Albright
March 21 – 5:30-6:30PM
As a 24-year-old man, Albright and his young family were living in Colorado when he got the “call” from the Federal Bureau of Prisons. He was trying to get hired at the Englewood, Colorado institution, but instead he got a letter from P.J. Madigan, the Warden at Alcatraz, asking if he would accept an appointment in San Francisco. Expecting to just serve his first probationary year at Alcatraz, with the expectation to transfer back to Englewood, Albright would end up as the last guard on Alcatraz as he escorted the last of the 27 inmates off the Island. After his assignment at Alcatraz, Jim stayed in prison work and ended his career with 26 years, working at five different prisons. He retired in Terre Haute, Indiana.

John Martini
April 26 – 5:30-6:30PM
John A. Martini is a native San Franciscan and a life-long researcher into the history of California and the American West. He worked as a National Park Ranger for more than twenty-five years at parks around the country including Golden Gate National Recreation Area, USS Arizona Memorial at Pearl harbor and Teddy Roosevelt’s country estate at Sagamore Hill in New York. His published works include Fort Point National Historic Site; Fortress Alcatraz: Guardian at the Golden Gate; The Last Missile Site; Fort Baker Through the Years; and Sutro’s Glass Palace: The Story of Sutro Baths. After more than 25 years as a ranger, Martini retired to pursue a career as a writer, historian, researcher and lecturer. He appears regularly on The History Channel, A&E Network, The Discovery Channel and PBS history specials. He continues to volunteer for the National Park Service, notably on Alcatraz Island, at Lands End in San Francisco and at Fort Cronkhite in Marin.

Jolene Babyak
May 24 – 5:30-6:30PM
In her years as an author/speaker, Jolene Babyak has become one of the most knowledgeable, firsthand experts on Alcatraz, where she lived twice as a child. She is the author of four books, including: Eyewitness On Alcatraz, 1988; Birdman, The Many Faces of Robert Stroud, 1994; Breaking The Rock: The Great Escape from Alcatraz, 2001; and Alcatraz Most Wanted, 2008. She is currently at work on a new book about family life on the Island. Her father, Arthur M. Dollison, worked on the prison Island for nine years, eventually becoming the associate warden. Babyak lived there at age seven for a year and a half and again in 1962 when she was 15 years old. She was on the Island, asleep, during the escape attempt later portrayed in the Clint Eastwood movie, Escape from Alcatraz.