Skip to content
Europe / A Brief History of Venice’s Gondolas

A Brief History of Venice’s Gondolas 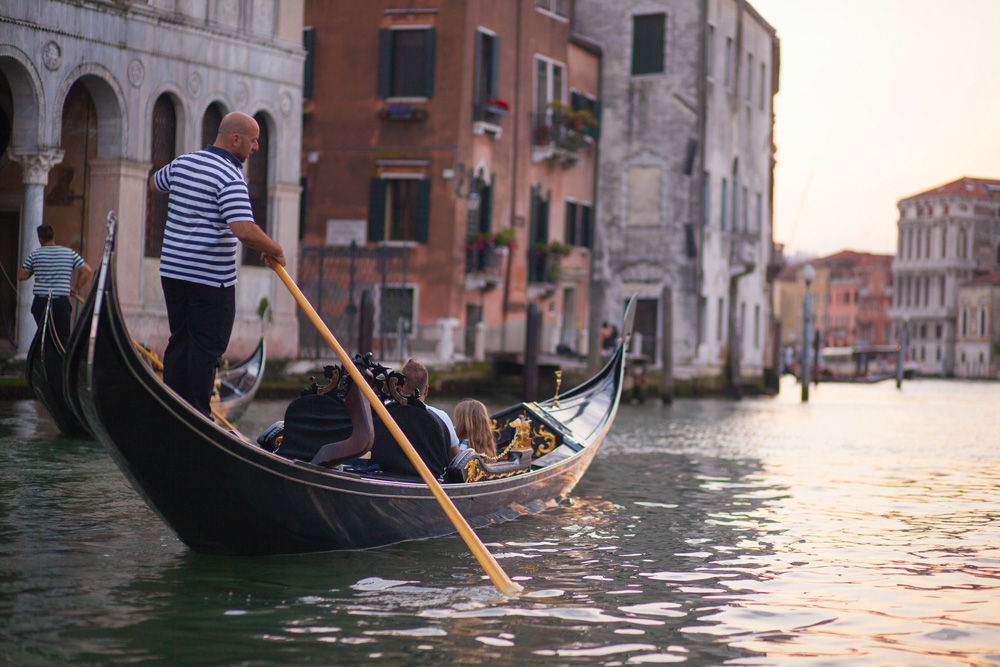 What is the origin of the Venetian gondola?

The term gondola has been in circulation since the 11th century, but the boat’s presumed predecessor was the scaula, a slim Roman boat with a flat bottom. Though it had a much broader, more symmetrical build than today’s gondola, it had the advantage of masterfully navigating through the vast network of meandering Venetian canals—a harrowing task in any vessel. 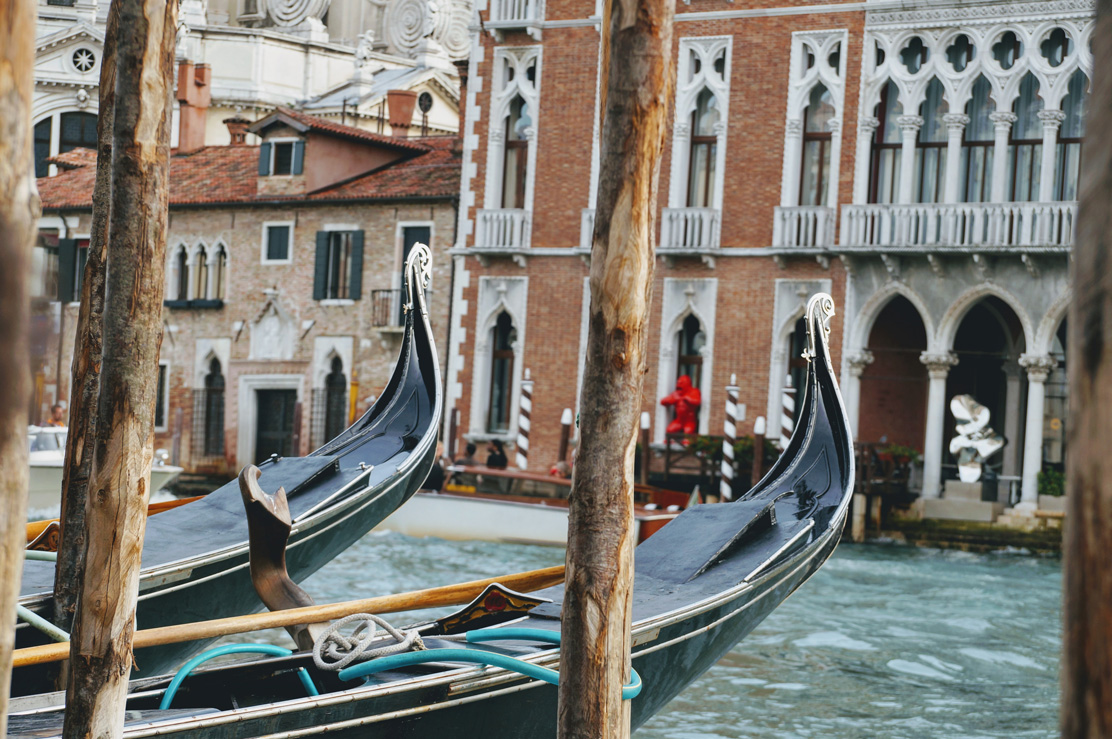 How did the gondola’s design evolve over time?

As Venice became an important city of world trade in the 16th century and its population subsequently exploded, the scaula became less suited to traveling through Venice’s crowded canals and lagoons, and little by little, the boat’s design began to evolve. The shape of the boat became dramatically longer and narrower, with its extremities partially jutting out of the water.

By the 1800s the gondola had been stretched to its current condition—the typical Venetian gondola now stretches about 36 feet long and weighs around 770 pounds. The iconic, asymmetrical banana shape we know today gradually developed around the beginning of the 20th century and has not been touched since.

With its streamlined silhouette, the gondola quickly became one of the easiest and most popular modes of getting around in Venice. Not long after the popularity of the gondola increased, it also became one of the most stylish modes of transport. Newer models were fitted with elaborate ornamentation and sumptuous trimmings that appealed to the affluent merchants and dignitaries keen on flaunting their wealth and social status along the Canal Grande.

How were private gondolas outfitted?

Many of these luxurious gondolas were kitted out with creature comforts, particularly the small cabin called the felze, which served the purpose of shielding passengers from unfavorable weather while ensuring privacy. There was even an unofficial understanding between gondoliers and passengers—something like, “what happens in the gondola stays in the gondola”—since these small cabins quickly became used for secret meetings and romantic trysts. 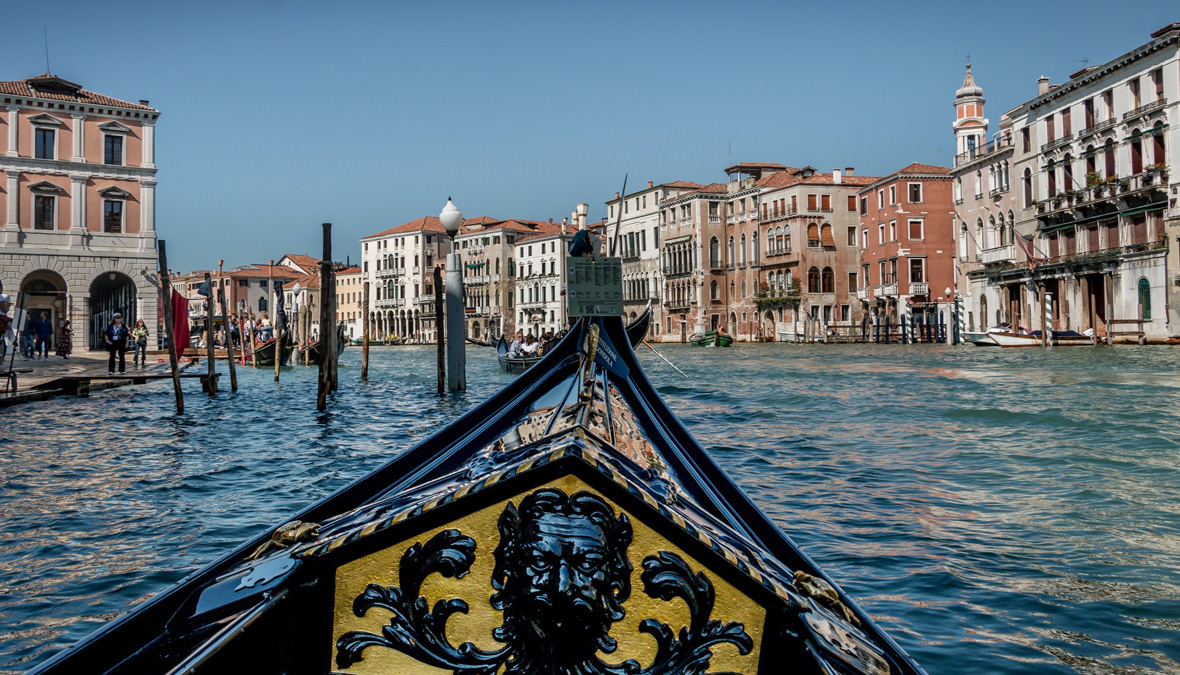 Why are Venetian gondolas black?

So, why are all of Venice’s gondolas black? Blame it on those same wealthy merchants and dignitaries, whose ostentatious swagger finally drove Venetian officials to impose a sumptuary law—a measure aimed at tapping the brakes on consumption. This law effectively mandated that all gondolas be painted black, and that was the end of that.

Are all Venetian gondolas black?

Today, of course, you’ll occasionally see a gondola floating down the Grand Canal in a more cheerful color. But there’s only a handful of them—Venice still mandates that all gondolas should be painted a darker color, and many gondoliers prefer to stick with tradition by painting their boats a glossy black.

How do Venetian gondolas look today?

In spite of the austerity measures imposed by city officials in Venice, gondolas still cut an elegant figure today. They are often fitted with opulent upholstery and gentle ornamentation, including the unmistakable fèrro, the stylized piece of metal adorning the bow. The iconic iron prow head counterbalances the gondolier at the stern and is often used as a visual shorthand for and symbol of Venice.

How are Venetian gondolas made?

The traditional production of Venetian gondolas takes place in the squeri—designated workshops where highly skilled craftspeople use specific kinds of wood, including oak, mahogany, lime, walnut, fir, cherry, elm, and larch) to produce different parts of the vessels. The process takes around two months to fully complete, and the typical gondola is priced upwards of €38,000.

One of the best ways to really appreciate a gondola—aside from taking a gondola ride—is to pay a visit to one of these workshops. Squero San Trovaso is one of the most famous gondola workshops in Italy and offers insight into just how arduous the boats’ production really is. The carving of the gondola’s iconic, curvy oarlock (la forcola) alone is a particularly laborious art, and watching its creation gives a deeper appreciation for and understanding of the craft behind the vessel.

Who owns the Venetian gondolas?

In the old days, four gondoliers typically shared ownership of a single gondola, with three oarsmen to row the boat and an additional person on a dock who helped bring it ashore again. But modern gondolas and gondoliers are strictly controlled by a guild that oversees the boats’ production, maintenance, and licensing.

How many gondolas are there in Venice?

During the boat’s heyday in the 17th and 18th centuries, there were an estimated eight to 10,000 gondolas floating through Venice’s storied maze of narrow canals. Today, however, there are only 400-some Venetian gondolas in active use by official gondoliers—most of whom cater solely to the millions of tourists that pour into the magical city every year.

Do all gondoliers sing during a Venetian gondola ride?

A gondola is nothing without its gondolier, who’s often just as much a part of the attraction as the boat ride itself.

Perhaps compensating for the mandate that all gondolas be painted black and toned down in general, the typical Venetian gondolier is by and large a charmingly flamboyant character, full of amusing local anecdotes and a fairly solid grip of gondola history. Contrary to hearsay and Hollywood, however, not every gondolier sings.

But they are essential to the proceedings. Without a gondolier standing while rowing backwards or engaging in powerful forward rowing with a single oar, the boat would capsize, landing everyone in the lagoon. The careful positioning of the gondolier in the boat provides a counterweight that stabilizes the gondola’s famous asymmetrical shape.

What’s the best way to book a gondola ride? 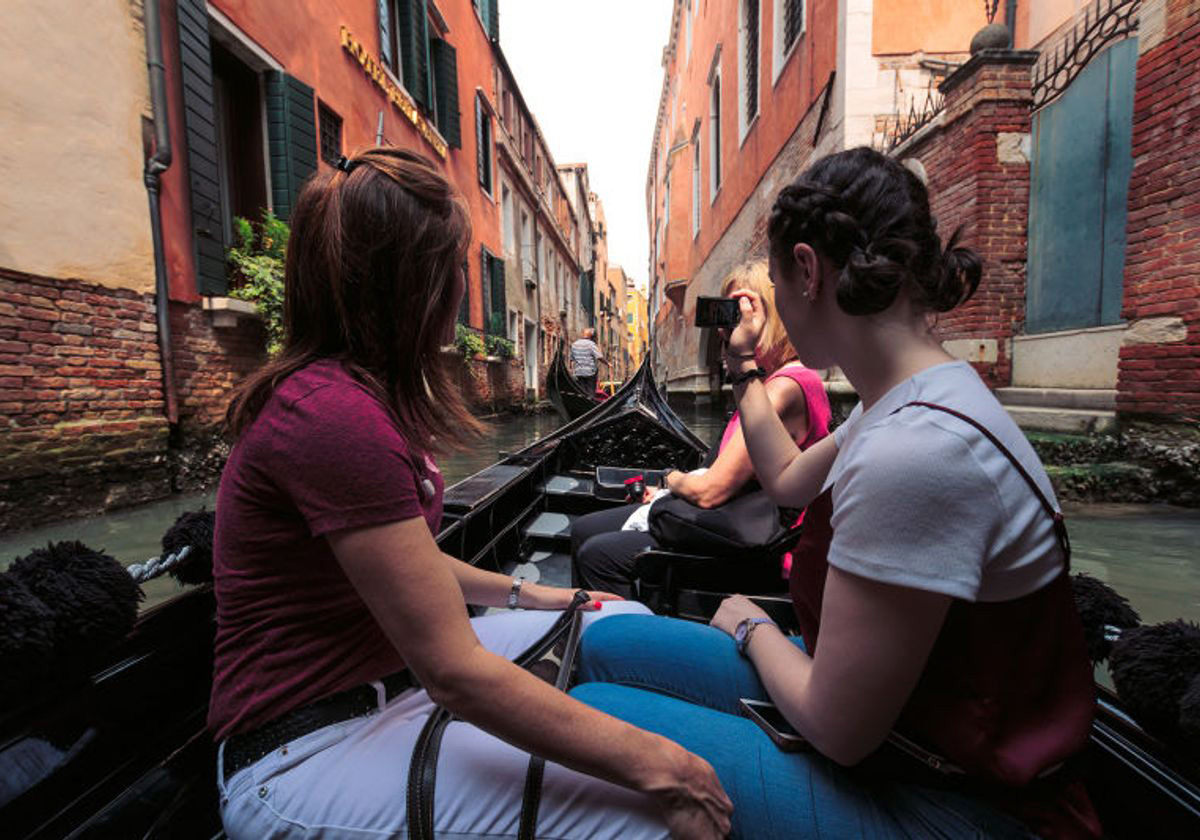 Each year, crowds flock to Venice to take in the famous Grand Canal and Rialto Bridge, its three main islands and many lagoons, and to marvel at its countless bridges—preferably in one of the city’s iconic gondolas.

City Experiences offers multiple ways to get out on the water. The Venice in a Day walking tour hits plenty of major sites over the course of the full-day excursion, including St. Mark’s Basilica and Doge’s Palace (both of which you’ll see with skip-the-line tickets), but the 30-minute gondola ride is one of the highlights.

The three-hour Venice Gondola, Market & Food Tour makes stops for snacks at sandwich joints and bacaros, not to mention the legendary Rialto Fish Market. Your gondola ride has a delicious destination too: the old Jewish Ghetto, Cannaregio, where you’ll nosh on some of the best seafood pasta in town.

Finally, there’s the Welcome to Venice walking tour, which lets you explore Cannaregio and skip the line at St. Mark’s Basilica before hopping into a gondola and gliding through the city center on a half-hour float.