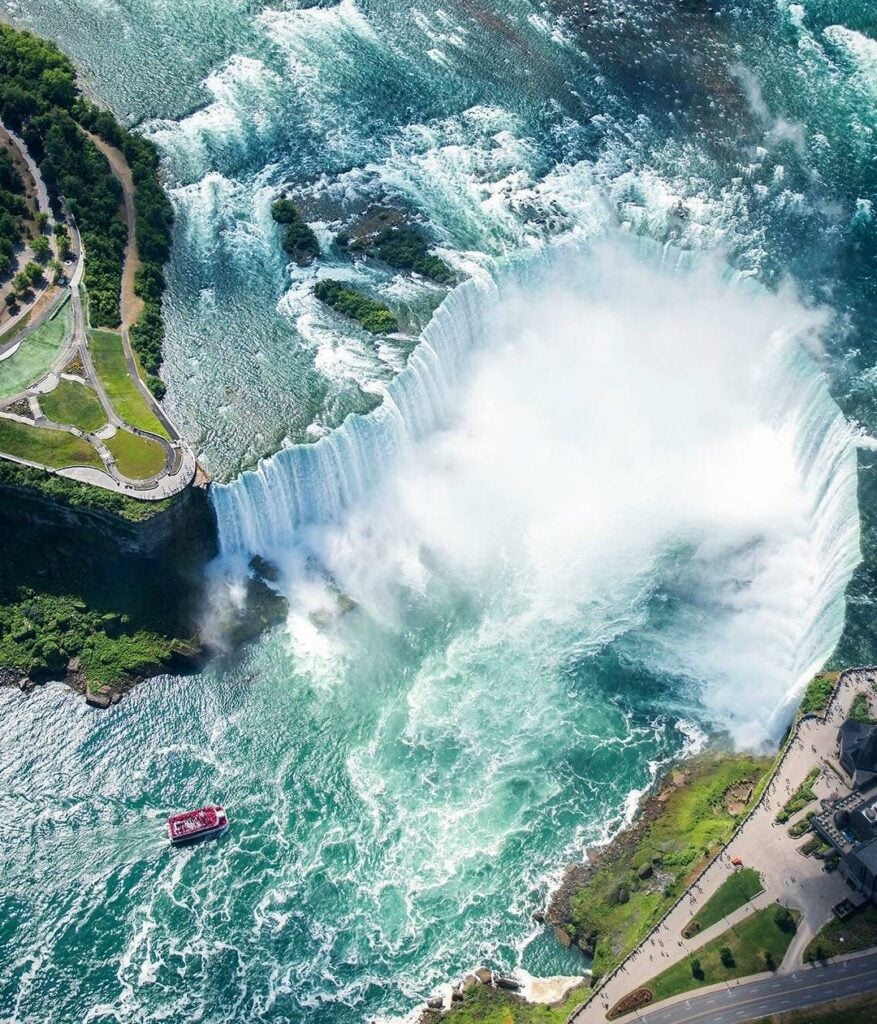 Niagara Falls is known famously for its three thunderous wonders; bustling city life, international award-winning wineries, and extremely friendly people. Each year, the city welcomes millions of visitors from around the world looking to experience, touch, and taste a piece of the famous falls and its surrounding city. Not only do travellers choose to visit Niagara Falls because of the sites to see, or the closeness to international Canadian – U.S. borders, but also to become one with nature. If your interest in travelling is to be around natural elements and experience feelings of tranquillity, consider Niagara Falls as your next city to visit! Here are some Niagara Falls fun facts about the world’s most famous waterfalls to help you plan your visit.

1. When Was Niagara Falls Created?

About 12,500 years ago Niagara Falls was created when the Niagara Region became free of ice. As the ice melted, the Great Lakes, including Lake Erie and Lake Ontario, were formed. Water would continue to travel northward through Lake Erie, the Niagara River, and Lake Ontario, then through the St. Lawrence River to the Atlantic Ocean.

When the Niagara River intersected with an old riverbed, one that had been hidden during the last Ice Age, it tore through the Niagara Gorge walls and filled the bottom of the river. As opposed to being a waterfall, the water was rapids.

‘Does Niagara Falls ever freeze?’ is the most common question visitors ask. Although Niagara Falls has never been frozen, there have been ‘ice boom’ jams in the past. Before 1964, the ice would float from Lake Erie to the Niagara River impeding with power diversions and build ice along the shorelines. If you visit the Falls in the Winter you will notice the American Falls appear ‘more frozen’ than the Canadian Horseshoe Falls. This is because the American Falls receive only 7% of the Niagara River water flow with the rest diverted over the Canadian Horseshoe Falls. With less water, there is more potential for ice build-up, making the waterfalls appear frozen.

3. Where Does The Word Niagara come from?

It is believed that the word Niagara originates from the Iroquoian word ‘Onguiaahra’ meaning ‘Strait’. Making reference to the narrow waterways that flow north from Lake Erie to Lake Ontario.

4. How Was The Whirlpool Created?

5. What’s The Future of the Falls?

Geologists continue to monitor the Niagara Gorge and erosion rates of the Falls. Predictions say that the waterfalls will continue to erode 0.3 m (1 foot) every year. Five hundred years ago, the waterfalls eroded at a much faster rate of  1-1.5 m (3-5 ft) per year. Diversion of water to the hydropower generating plants has helped significantly reduce the rate of erosion.

6. What Is Fossil Water and Foam?

While aboard our boat you may hear mention of ‘Fossil Water.’ Fossil water is a term used when describing the Niagara River because it was formed during the last Ice Age that covered the land 18,000 years ago. Less than 1% of the Great Lakes water is renewable on an annual basis and the rest is a legacy from the last ice age. Particles of sedimentary rock buried deep beneath the river bed form a natural foam that sits on top of the water in the Niagara River.

Since 1859, Niagara Falls has seen nine daredevils successfully make it across the tightrope from Niagara Falls, New York to Niagara Falls, Canada. In 1859, Jean Francois Gravelet, a.k.a. ‘The Great Blondin’, was known for performing wild stunts including walking across a tightrope blindfolded while pushing a wheelbarrow with his hands chained. He even cooked an omelet while standing in the middle of the wire. Another stunt included him carrying his manager on his back while he walked across!

In 1860 William Leonard Hunt, a.k.a ‘The Great Farini’, tried to outdo Blondin by carrying a washtub on his back while crossing. He even lowered a bucket to gather water while on the tightrope! In 1867, Niagara Falls saw its first female tightrope walker to successfully make it across. Maria Spelterina walked across a dozen times, each time incorporating new stunts making her look graceful as she made it across. In 1873, English tightrope walker Henry Ballini, known as the ‘Australian Blondin’, was the first to bungee jump from the tightrope. He repeated this stunt again in 1886.

In 1887, Niagara Falls Native Steve Peere walked across more than half of the tightrope, but tragedy struck when Peere slipped and fell to his death in the river below. Two years later, using the same tightrope, Samuel J. Dixon crossed over the Niagara River and again one – year later over the Cantilever Railway Bridge and Railway Suspension Bridge.

In 1975, a French tightrope walker Henri Julien Rechatin attempted the ropes twice, once on June 3rd while balancing on two stacked chairs. And the second act on the following day where Henri’s friend Frank drove a motorcycle across the Niagara Whirlpool while Henri balanced on top and Henri’s wife, Janyck, hung from the motorcycle barely touching the waters below.

In 2012, over 150 years after the first successful walk, Nik Wallenda successfully crossed from Goat Island to Table Rock Welcome Centre on a tightrope. His performance was televised live on national TV networks in the US and Canada, as well as viewed in person by hundreds of thousands on both the Canadian and United States Sides of Niagara Falls.