Witnessing the Occupation of Alcatraz 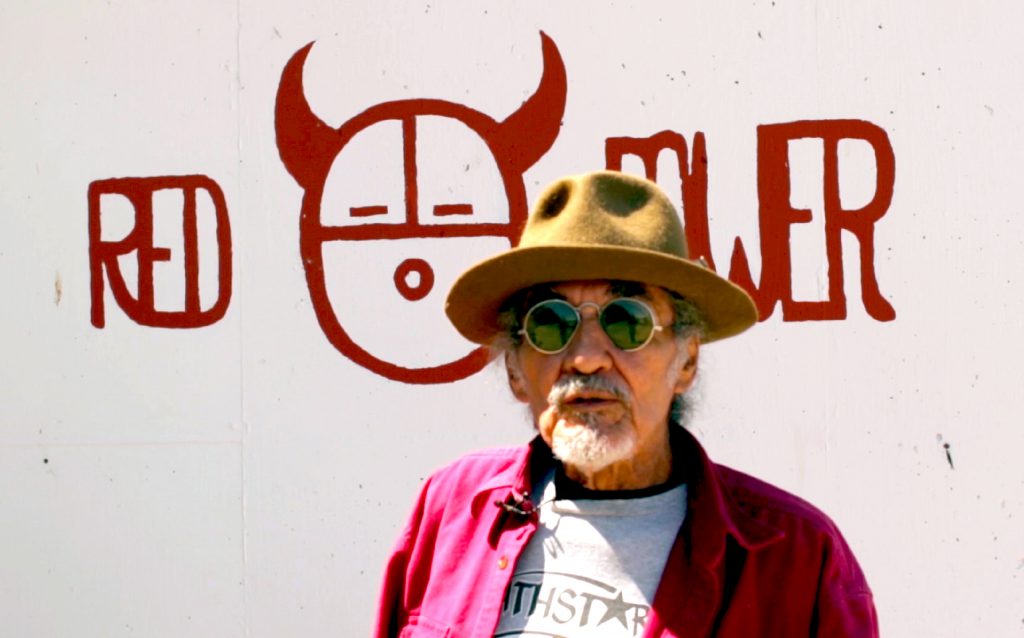 Eloy Martinez is a retired contractor in the flooring business. Originally from four corners in Colorado, he grew up in a mining camp in Walsenburg, Colorado and came to California in 1966 to get involved with the farm workers. He then transitioned to the Alcatraz movement during a couple of protests when he met Richard Oakes, who recruited Eloy, and he’s been coming back for 50 years.

While Eloy didn’t live on the Island very often, his wife and son were on Alcatraz more frequently. During the Occupation, he was a gopher, picking up supplies and giving people rides back and forth from the mainland to Alcatraz.

Eloy tells us that during the Occupation in 1969, the water tower was ceremoniously painted and the message was “Peace and freedom, you’re welcome to Indian land” and it’s important because all the boats that circle the Island are able to see the message as it stands way up high. He recollects, “The preservation of the tower was an important monument to remember our history and efforts.”

Taking a look back, Alcatraz didn’t look anything like it does now. Eloy recalls, “It was a really dreary place and you could see it was all falling apart. All the reservations are the same…you can’t grow nothing on them because there’s nothing but rock, transportation is not good and there’s no grocery stores. So, everything that this island symbolizes was just kind of like life is on a reservation.

He continues, “It’s more than just an atrocity and genocide as a native people but it’s kind of like if you go back into history and see all of the people in the termination, which started in 1953. It was like a big wholesale on all the Indians everywhere and that’s when they were taking a lot of the kids away from their parents, putting them in industrial institutions, correctional institutions, hospitals and other schools. Our kids were getting taken away and things haven’t changed that much you know.”

Eventually, however, termination policies ended, child health and welfare was enacted and religious freedom to dance and sing ensued…all of those had previously been prohibited during the termination. According to Eloy, “The Indians got back about 40,000 acres, Yakima tribe got a bunch of land back, got federal recognition for a bunch of tribes, which is why a lot of tribes have casinos now. Additionally, they have Indian Health Centers in the center in Oakland and San Francisco that came about to serve the Indian community.”

One of the featured speakers at the Sunrise Gathering will be 85-year-old Ruth Orca, who according to Eloy is a peacemaker and she’s cool because she doesn’t take no stuff from nobody. She will be speaking about the history of the Occupation and treatment of all tribes.

But the good that came from the Occupation is that the kids today are familiar with the Occupation at Alcatraz and it’s like a reunion of our history and vast cultures of all tribes. “Now, everybody is talking about it,” comments Eloy.

The original 14 occupiers of Alcatraz were LeNada Means, Richard Oakes, Fred Shelton, John White Fox, Linda Arayando, Kay Many Horses, John Virgil, Bernell Blindman, David Leach and more, according to Eloy’s recollection. Some of their descendants will be in attendance to share the stories of their ancestors.

To learn more about Eloy Martinez and the Occupation of Alcatraz, please visit https://www.parksconservancy.org/stories/50th-anniversary-american-indian-occupation or https://www.nps.gov/goga/learn/news/occupation50.htm.