The Turbulent History of the Chicago River 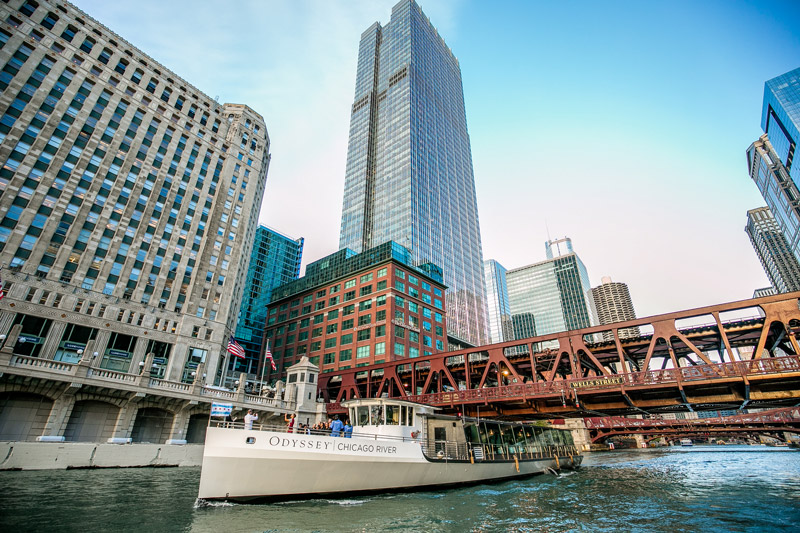 An excellent way to learn about the history of the Chicago-area waterway system is on a City Cruises river tour such as the classic Seadog River & Lake Architectural Tour, the Best of Chicago architecture tour, or the ever-popular Chicago Riverwalk tour.

Enriching the local economy and bolstering commerce while occasionally posing significant challenges to its communities, the Chicago River  system has both a natural and unnatural history—and not just when it’s dyed green for St. Patrick’s Day.

From Lake Michigan to the South Branch, here’s how the Chicago River has influenced Windy City over the centuries.

Indigenous peoples who lived in the area called the river Chigagou 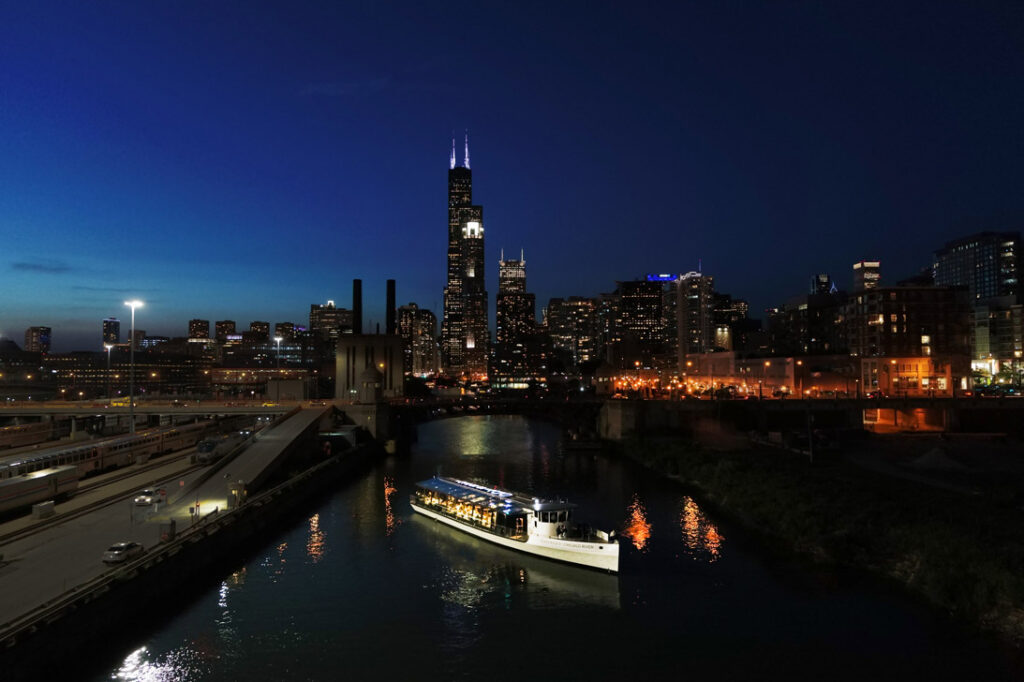 Before the onslaught of European occupation and colonization, the Chicago area was teeming with wild flora and fauna—deer, foxes, black bears and, most significantly, beavers. Beaver, in essence, was a cash cow, one that eventually fueled European colonization, as beaver fur and castoreum (an essence extracted from beavers, often used in colognes and perfumes) were much coveted in Europe.

Indigenous peoples who lived in what is now Chicago called the river Chigagou, or the “wild garlic place.” The Archaic, Upper Mississippian, and Woodland peoples (and the Potawatomi and Miami peoples who moved to the area later) were highly skilled at navigating the Chigagou’s waters, relying on it as a source of drinking water and food and a means of transportation for things  like trading and hunting.

The city of Chicago was founded by European colonizers

The early settlers were nowhere near as skilled as the people whose land they stole, but at some point they learned the clever tricks for navigating the river, including a handy shortcut that dramatically reduced travel time, though it required carrying the canoes across a couple of  miles of muddy portage to get to the Great Lakes.

That tip in turn gave European colonizers the idea to found a city where Chicago is located today, given the opportune conditions of speedy transportation between the Mississippi River and the Great Lakes—two of North America’s major trade and transportation networks.

The 1795 Treaty of Greenville was agreed by the United States and a confederation of Native American tribes. As a result, the former gained ownership of a 6-mile plot of land at the mouth of the river, and essentially, the rest is history: any  city founded at this hub was bound to become a commercial success.

Overcoming obstacles on the Chicago River 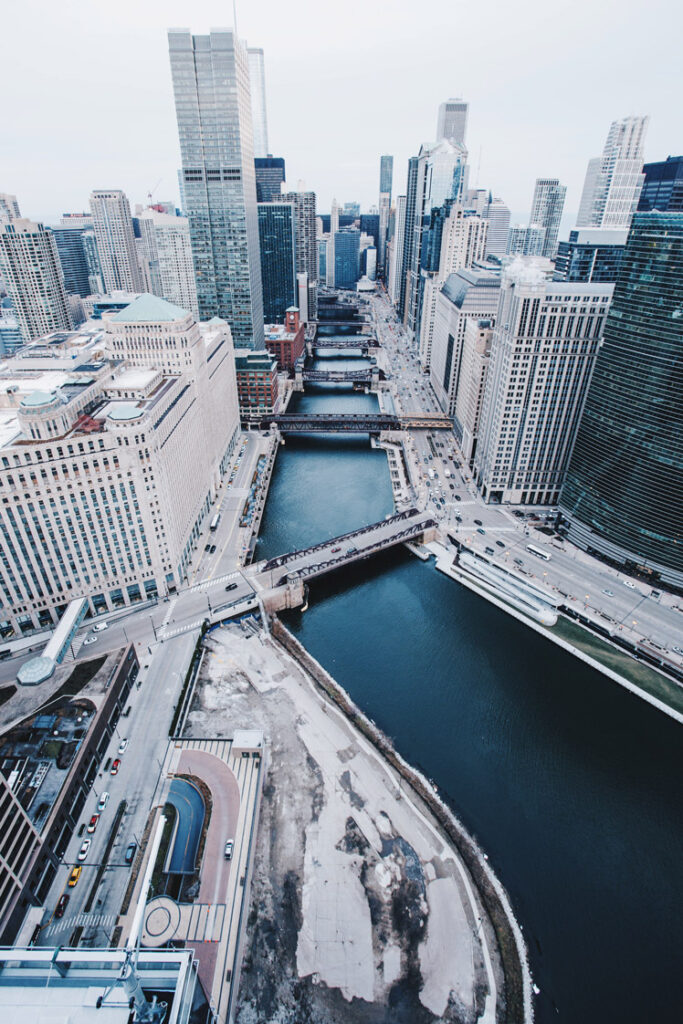 As word of the location spread, more and more people were attracted to the area, eager to reap the benefits of its ideal positioning on a major route of commerce and exchange. Before human manipulation, however, the river veered south at what is today Michigan Avenue, and as such, sailors were obliged to painstakingly navigate around a sandbar when entering or leaving the harbor.

It was especially challenging, if not impossible, for larger ships, which would often drop anchor just shy of the harbor and reload their goods onto smaller vessels that could make it around the sandbar, so authorities concocted plans to remedy the complication.

Between 1816 and 1828, a couple of channels were dug through the sandbar, but none were successful, repeatedly refilling with sand. Then, in 1833, the United States Congress gave the green light to construct piers and carry out other measures to reinforce and improve the harbor. This mission was broadly a success, and larger vessels were finally able to enter and exit the harbor with little difficulty.

In 1836,  the Illinois General Assembly commenced work on the massive Illinois and Michigan Canal that would bypass the sandbank. The construction of the 96-mile ditch took some 12 years to complete, using Irish immigrant laborers . After the completion of the canal, the United States and its position in the world would change forever. 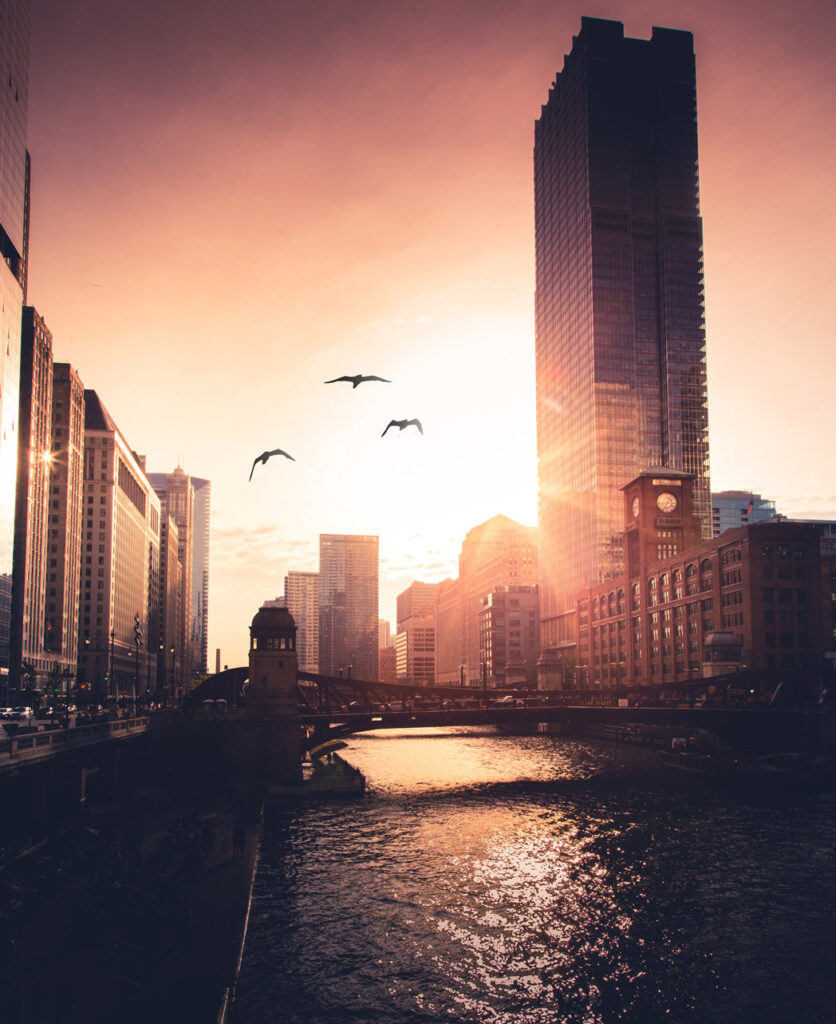 Over time, more alterations were made to the Chicago River’s harbor and landscape. An extensive sewer system was built and the city essentially rose out of the mud: the  harbor was expanded and the river dredged and widened, so  its flow reversed to run west from Lake Michigan.

In 1900,  the 28-mile Sanitary and Ship Canal was completed, in hopes of improving the local water quality—an effort that was thwarted by those dumping pollutants, both accidentally and knowingly , into Lake Michigan, the city’s source of drinking water.

Yet more attempts to improve the local drinking-water quality were made in 1910 with the construction of the 8-mile North Shore Channel and the 16-mile Cal-Sag Channel, which was completed in 1922. Both of these efforts expanded the Sanitary District’s jurisdiction, and the projects were partially successful at redirecting the river’s flow away from Lake Michigan. In 1929, a very large bend in the river was straightened out to ease the flow of river and train traffic.

In more recent years, Chicagoans have been advocating for and taking steps towards treating the river with more respect, though the tradition of dying it green for the St. Patrick’s Day parade persists, celebrating its 60th anniversary in 2022.

It’s still not a source of drinking water—you don’t even want to swim in it, really—but deindustrialization in the mid-20th century helped with environmental issues contributing to the poor water quality , and it’s seen some improvements.

Many businesses and restaurants have set up shop along the banks of the river, particularly since construction began on the Chicago Riverwalk in 2001. The last section of the multi-use path opened in 2016, and today the popular waterfront route runs west along the river and Wacker Drive, all the way from Lake Michigan to Lake Street.

Share Article
Twitter Facebook
Previous Story Welcome to Sacramento: The Top 8 Things to Do While in Town
Next Story What to Buy for the Traveler in Your Life: Holiday Gift Guide 2022