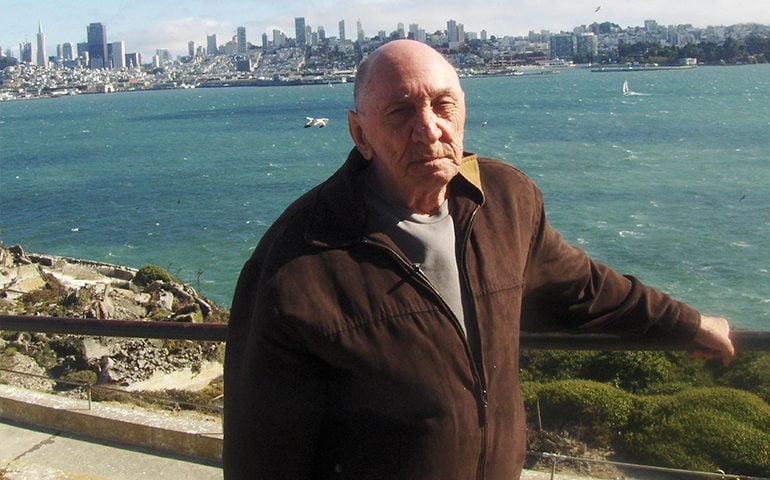 I’m William Baker, former inmate of Alcatraz. Now that I am back to the straight and narrow, I go back now and talk to visitors, answering questions about my prison years, signing autographs, taking pictures and interacting with visitors to the Island. I can’t help it if history made me a rock star. I’ve written a book entitled Alcatraz 1259, which I sign and promote on the Island three or four days a week.

While I answer a lot of questions, the one most often asked is “Isn’t it strange coming back to the prison where you served time?”

My short answer to that is “Yes but they made me an offer I couldn’t refuse.” And, with a grin I add “So I’m very happy.” And they nod and laugh and go on the next question.

My short answer is honest and true and not meant to be deceitful at all. The long answer is more complicated and requires a lot of explanation of the nature and character of an Alcatraz convict. You see, most of us came here from other prisons, transferred to Alcatraz for breaking rules, serious rules.

I came here because I was escaping from other prisons. That’s the most serious rule of all, in their eyes. More serious, even, than murder. So, we were a bunch of hard-headed convicts before we got to Alcatraz. We had already been in the hole many times, broke a lot of rules. We were used to this kind of life before we got here. So, we could handle this place.

I’m not saying Alcatraz was a good place. I’m just saying we were some bad boys. We could handle it and we did. We walked the yard laughing and playing, talking about robbing banks when we got out; we bet on ball games; played cards; played ball; and made a little home brew once in a while and got drunk.
We lived here.

It wasn’t much of a life. We were locked up in a six by nine cell most of the time. We hurt. And you can rest assured that we were properly punished. But, we dealt with it. And we survived. For wherever there is life, the human spirit will always prevail.

I didn’t leave Alcatraz with scars or nightmares. So, I didn’t bring any back with me when I returned later in life.

The question was “Isn’t it strange coming back here after having served time here,” which means “Doesn’t it bother you to come back after what you went through?” So, the long answer is also honest and true, but it’s long, and I am tempted to add “And, no, it doesn’t bother me. The wardens are all dead, I survived, so this is my turf now.”
—William G. Baker AZ-1259