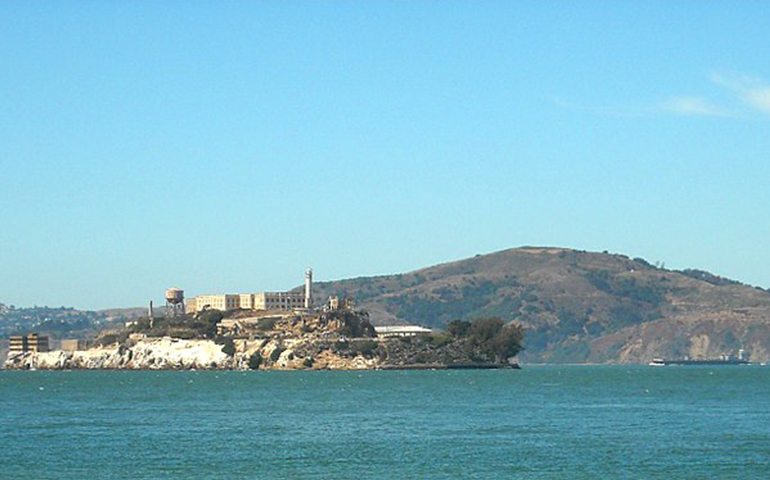 Angel Island is the second largest Island in San Francisco Bay Area with Alameda being the largest. Angel Island is so large that on a clear day, Sonoma and Napa can be seen from the northern side of the Island and San Jose can be seen from the south side. The highest point on the Island, almost exactly at its center, is Mount Caroline Livermore, which is 788 feet high. The majority of the Island is part of the city of Tiburon in Marin County while a small sliver at the east end extends in the City and County of San Francisco. The Island is separated from the mainland of Marin County by Raccoon Strait, which is about 90 feet deep.

Until about ten thousand years ago, Angel Island was connected to the mainland, but it was cut off by the rise in sea levels due to the end of the last ice age. From about two thousand years ago, the Island was a fishing and hunting site for the Coast Miwok Native Americans. Similar evidence of Native American settlement is found on the nearby mainland of the Tiburon Peninsula upon Ring Mountain.

In 1775, the Spanish naval vessel San Carlos made the first European entry into San Francisco Bay under the command of Juan de Ayala. Ayala anchored off Angel Island and assigned its modern name Isla de los Ángeles. The bay where he anchored his ship is now known as Ayala Cove.
Like much of the California coast, Angel Island was subsequently used for cattle ranching. In 1863, during the American Civil War, the United States Army was concerned about Confederate naval raiders attacking San Francisco, so it decided to construct artillery batteries on Angel Island, first at Stuart (or Stewart) Point and then Point Knox. Colonel Rene Edward de Russy was the Chief Engineer and James Terry Gardiner was the engineer tasked with designing and supervising the work. The Army established a camp on the Island (now known as Camp Reynolds or the West Garrison) and it subsequently became an infantry garrison during the US campaigns against Native American peoples in the West.

Fort McDowell
In the late 19th century, the army designated the entire Island as “Fort McDowell” and developed further facilities there, including what is now called the East Garrison or Fort McDowell. In 1891, a quarantine station was opened in Ayala Cove (which at the time was known as Hospital Cove). During the Spanish American War, the Island served as a discharge depot for returning troops. It continued to serve as a transit station throughout the first half of the 20th century, with World War I troops embarking and returning there. At the end of the war, the disembarkation center was commanded by William P. Burnham who had commanded the 82nd Division in France.
During World War II, the need for troops in the Pacific far exceeded prior needs. The facilities on Angel Island were expanded and further processing was done at Fort Mason in San Francisco. Prior to the war, the infrastructure had been expanded, including the construction of the Army ferry USAT General Frank M. Coxe used transport troops to and from Angel Island.

Fort McDowell was also used as a detention station for Japanese, German and Italian immigrant residents of Hawaii arrested as potential fifth columnists. These internees were later transferred to inland Department of Justice and Army camps. Japanese and German prisoners of war were also held on the Island, supplanting immigration needs, which were curtailed during the war years.

The army decommissioned the military post in 1947. In 1954 a Nike missile station was installed on the Island. The missile magazines were constructed above Point Blunt on the Island’s southeast corner and the top of Mount Ida (now Mount Caroline Livermore) was flattened to make way for a helipad as well as the associated radar and tracking station. The missiles were removed in 1962 when the military left the Island. The missile launch pad still exists, but the station atop Mount Caroline Livermore was reverted to its original contours in 2006.

Quarantine Station
The Bubonic Plague posed such a threat to the United States that Angel Island opened as a quarantine station in 1891 to screen Asian passengers and their baggage prior to landing on American soil. The construction of this federally funded quarantine station was completed in 1890 and the compound contained many separate buildings, including detention barracks, disinfection facilities, convalescence quarters and an isolation hospital that was known as the “leper’s house.”

In response to the death of Wong Chut King, a Chinese immigrant who worked in a rat-infested lumberyard in Chinatown, the San Francisco Health Board quickly quarantined the local area to neutralize possible disease-causing agents. People suspected of having any contact with the disease were sent to isolation facilities. The Chinese were confused by the idea of separating the entire region to control the spread of the disease because they believed it emerged from toxic vapors created in the dirt via season changes.

In response to more deaths, tissue samples were sent to Angel Island for testing to determine if they harbored Yersinia Pestis, the bacteria responsible for spreading the bubonic plague. At this time, the plague was difficult to diagnose due to other diseases, which could mask the presence of plague. Bacteriologist Joseph Kinyoun, who was stationed at Angel Island in 1899, believed that the plague would spread throughout San Francisco’s Chinatown after Yersinia Pestis was confirmed from one of the deaths. Even with a vaccine to inoculate and protect the residents of Chinatown, the Chinese believed that the vaccine was experimental and didn’t want it administered.

The immigration station at Angel Island was predominantly used to inspect, disinfect and detain Chinese, Japanese and other Asian immigrants who sailed across the Pacific Ocean. In addition to standard medical examinations, Chinese immigrants were inspected for parasitic diseases and the tests for intestinal parasites required a stool specimen. Immigrants described the examination and disinfection process as brutal, humiliating and indecent. Sick passengers were sent to the hospital on the Island until they could pass a medical examination and an immigration hearing. Investigation processes determined the length of time an immigrant would stay at the station and Chinese immigrants could be detained for a period as short as two weeks to as long as two years.

A person’s racial identity and social class determined the intensity of the examination imposed, resulting in fewer white Europeans and American citizens being subjected to the inspections. When they were subjected to inspections, doctors were more diligent about adhering to sanitation practices.

A fire destroyed the administration building in 1940 and subsequent immigration processing took place in San Francisco. On November 5, 1940, the last gathering of around 200 immigrants, including around 150 Chinese, were exchanged from Angel Island to brief quarters in San Francisco. The “Chinese Exclusion Act,” initially proposed to keep going for 10 years, was broadened and extended and not canceled until the point 1943 when China became our partner in World War II.
In 1964, the Chinese American community successfully lobbied the State of California to designate the immigration station as a State Landmark. Today, the Angel Island Immigration Station is a federally designated National Historic Landmark. It was then renovated by the California State Parks, and re-opened February 16, 2009.

The combination tour requires about 5½ hours and includes ferry rides to both Islands, a one-hour historic tram tour on Angel Island and the Cellhouse audio tour on Alcatraz Island. (Note: the tour of the Angel Island Immigration Station is not included in the Alcatraz & Angel Island Combination Tour).

In collaboration with California State Parks and the National Park Service, Alcatraz Cruises offers this seasonal tour with weekend tours now available and daily service from June 2 through September 30. Ticket prices are $76.25 per adult/junior (12-61); $51.00 for children (5-11); $74.00 for seniors (62+); and free for toddlers (0-4).
For bookings, visit Buy Tickets or call 415.981.7625. If booking the combination tour for a group of 15 or more people, please contact Alcatraz Cruises Group Services Department at 415.438.8361 or e-mail [email protected].