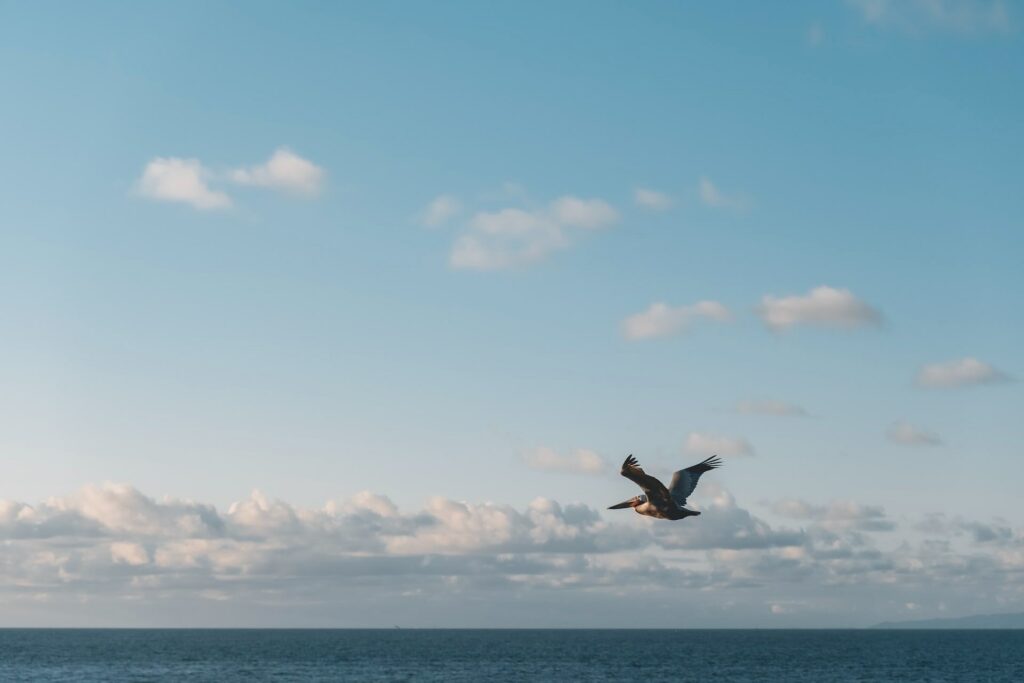 You can see some amazing seabirds on our City Cruises Whale Watch cruise in San Diego, the most common of which can be found here. Here are some other, less common seabirds, including several species of herons, that can be found in the San Diego Bay.

Reddish egret (Egretta rufescens)
The reddish egret is a fairly large heron with a gray body, a reddish neck, and bluish-black gray legs. Its bill is mostly pink and tipped with black. This active egret searches for food in shallow, saltwater habitats and often running and hopping to catch fish with its wings spread out. San Diego is near the northern part of the range for this species on the Pacific Coast. 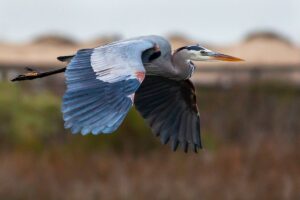 Tri-colored heron (Egretta tricolor)
This medium-sized heron is mostly dark gray with a white belly and reddish feathers on its neck and back. The juvenile has a white line running down its throat. When foraging, it either stands and waits for fish to swim by, or walks to stir up the bottom with a foot to startle prey.

Green heron (Butorides virescens)
This small, beautifully-colored heron typically rests in a crouched position at the water’s edge often hidden within vegetation. It has a greenish back with a chestnut neck, face and chest, white streaks on each cheek and the throat, dark gray wings, a gray and yellow bill, and yellow legs. The green heron usually sits at the water’s edge and waits for fish and frogs to move by, then spears them with its dagger-like bill. 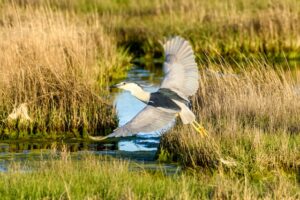 Brandt’s cormorant (Phalacrocorax penicillatus)
The Brandt’s cormorant is an iridescent black seabird found in saltwater habitats along the Pacific Coast of North America. Adults have a pale patch at the base of the throat, a bright blue throat pouch and fine, white plume feathers on its head, neck and back during the nesting season. During the non-breeding season, adults are much duller in color while juveniles are also a much duller brownish-black. Cormorants swim at the surface then dive to catch fish or squid, using their webbed feet to actively swim after prey. Like other cormorants, the Brandt’s cormorant holds its wings out to dry after diving. 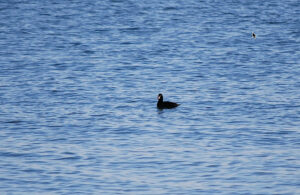 Surf scoter (Melanitta perspicillata)
This sea duck is strikingly-patterned in black-and-white. The male is all black with a white forehead patch and a white patch on the back of its neck, and a white, orange and black patterned bill. The female is a lighter brownish-black with white patches on each side of the head and at the base of the mostly dark gray bill. Nesting takes place during summer in freshwater lakes in high-elevation forests and the tundra mainly in Alaska and Canada. Surf scoters can be found in winter along both coasts of North America where it can often be seen diving for mollusks, crustaceans and other aquatic invertebrates.

Pacific brant (Branta bernicla)
This small sea goose has a black head, neck and chest with a broken white “collar” in the upper neck region, a brownish back, a black to light gray belly, and a white rump. The Brant nests in the arctic on the tundra and spends winters feeding on eelgrass, sea lettuce and other aquatic plants along both coasts of North America. The Pacific subspecies of brant winters from British Columbia to Baja California, Mexico and can often be seen swimming and feeding in flocks during the late fall to early spring months in San Diego Bay.

Western grebe (Aechmophorus occidentalis)
The western grebe is a black and white grebe with a long neck, a spear-like yellow bill, and red eyes. This species has a black back with black extending along the back of its neck and a black cap that extends below the eyes. The almost identical Clark’s grebe can be distinguished from the western grebe by the white face (its black cap does not extend below the eyes). Western grebes nest on freshwater lakes and marshes and overwinter in bays, estuaries, and sheltered coasts. They dive to catch fishes and occasionally crustaceans and aquatic worms. In the summer nesting grounds, adults perform an elaborate courtship display by rushing across the water with their necks extended.

Pied-billed grebe (Podilymbus podiceps)
The pied-billed grebe is a small, stocky, brown, bird with a short wedge-shaped bill, a brown body and an extremely short tail. Their bill is marked with a vertical black-stripe in the summer giving rise to their common name. Pied-billed grebes dive to hunt small fishes, crustaceans, insects, amphibians, and other small aquatic animals in freshwater lakes, rivers, and marshes and saltwater estuaries and bays. 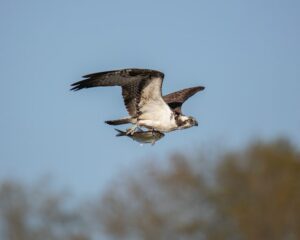 Osprey (Pandion haliaetus)
The osprey is a common fish-eating hawk spotted in freshwater and saltwater habitats worldwide except Antarctica. These attractive birds-of-prey are black to brown and white and have hooked bills and yellow eyes. They have a reversible outer toe on each foot and barbed pads on the soles that let them catch and easily grasp slippery fish. Osprey pairs build huge nests of sticks and other vegetation that are added to each nesting season and used from year to year. Often these nests are built on sea stacks, dried tree snags, and even man-made structures such as light towers, utility poles, and artificial platforms. Some of these nests are decades old and can be 10 to 13 feet tall and 3 to 6 feet across.

The brown pelican is the largest North American pelican. These big birds have a characteristic hunch-backed appearance, long necks, and large bills with a throat pouch used to scoop up fish. Pelicans are mostly dark brown with some lighter grayish-brown on their wings and necks. They can be found in coastal areas throughout much of North America, where they feed almost exclusively on small fishes that they capture by plunging from the air into the water. Breeding takes place along coasts from Virginia to Texas and California and inland along the Great Lakes.

The American white pelican is one of the largest North American birds, with a wingspan reaching almost 10 feet. They are all white with black wingtips and have a long bill with a large throat pouch used for scooping up fishes. Pelicans feed cooperatively, swimming in groups to herd and trap small fishes in shallow water where they can be easily caught. These big birds breed along inland lakes in western Canada and the northern United States and spend winters along coasts from California to Texas.

The rock pigeon is a species of pigeon that is native to Europe, Asia, and Africa. It is also the most common bird in cities. The rock pigeon is a medium-sized bird with a plump body and short legs. Its plumage is usually grey or blue but can also be white, brown, or black. The bird has a small head with a pointed beak. Rock pigeons typically live in flocks and are often seen scavenging for food in urban areas. They are also known for their cooing vocalizations. The rock pigeon is an important species in both the wild and in captivity. It is often used in research due to its ability to adapt to different environments. The rock pigeon has also been introduced to many parts of the world, where it has become established as a nuisance species.

If you want to see some of the less common sea birds in San Diego Bay, be sure to check out our list. While many more species can be seen here, we think these fifteen will give you a good sampling of what’s out there. Have you spotted any of these birds on your trips around the bay? Let us know in the comments below!