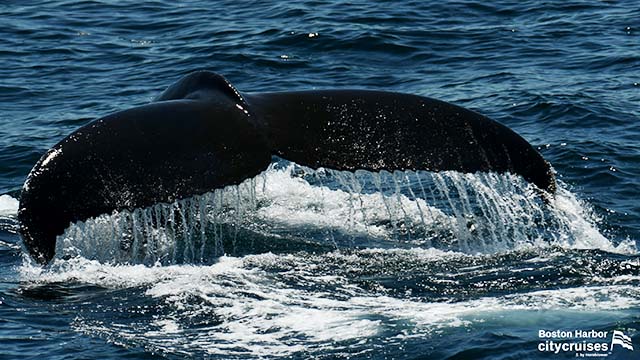 This morning the Sanctuary headed out to Jefferies Ledge with a hearty group of passengers who braved the impending rain with the hope of finding whales. We made quite an impressive journey in search of cetaceans and other marine life, finding ourselves not too far from the coasts of New Hampshire and Maine! We were excited to discover that our journey was not in vain, and we found ourselves graced with the presence of a humpback whale named Valley! While waiting for Valley to return to the surface after taking a dive, we noticed 2 more blows in the area, making for a total of 3 humpbacks sighted. Valley surprised us by surfacing right off our port side and allowed us an opportunity to get some fantastic looks as she slowly travelled at the surface. It was easy to track her movements as her flippers appeared to grow bright green beneath the surface, also offering evidence of how much phytoplankton is in the water! We got to see a couple beautiful fluking dives from Valley before we ran out of time and had to head home, and as we were slowly making our way out of the area, passengers were treated to bonus looks at one of the other humpbacks who had been seen in the area who surfaced behind us.

Overall, it was a great day out on Jefferies Ledge!

Today aboard the Asteria, the 12pm whale watch made its way towards Stellwagen Bank in search of whales and other marine life.  After a little bit of searching, we spotted a blow.  This turned out to be a fin whale!  This fin whale was taking short dives and not moving very far so we were able to get some really great looks at it.  It even popped up right next to the boat a few times!  After several great looks at this massive fin whale, we had to make our way back to Boston.  It was a fin-tastic day out on Stellwagen Bank!

Today aboard the Sanctuary, the 10 am whale watch made its way towards Stellwagen Bank in search of whales and other marine life.  Thanks to some eagle eyed passengers, we spotted a few blows in the area.  It turned out to be three separate fin whales!  We spent a majority of the time with one fin whale that was spending a lot of time at the surface and taking very short dives.  At one point it even came up right next to the boat!  We got some really great looks at this particular fin whale before we had to head back to Boston.  It was a really fin-tastic day out on Stellwagen Bank!

Today aboard the Asteria, we headed out to the middle of Stellwagen bank to find 2-3 fin whales, a minke, and a grey seal. Our first fin whale look was of a long surfacing of an adult before it began to pick up speed. We then moved on to a rather large fin whale, which unfortunately bares the scar from an anthropogenic injury. We used this as a teaching moment of a reminder of actions that can be taken to protect our wildlife. A great new resource you can show to local recreational boaters is from the organization See-a-Spout, who have developed a self-guided course for boaters who want to dive deeper and learn more. Please share! https://seeaspout.org/boating-course/?utm_medium=email&utm_source=govdelivery

Today the Asteria headed out to Stellwagen Bank in search of whales. As we approached the Mid-Bank area, we encountered some very thick fog, which seriously limited our visibility. But luck was on our side today, as we still managed to see the dark back of a Humpback Whale ahead of us. As the whale lifted its tail out of the water, we were overjoyed to recognize this whale as a female named Dross, a mother from last year and a naturalist favorite here in Boston! She was taking short dives and staying in the same area, giving great looks to both sides of the boat pretty frequently. She even pooped on one of her dives, which allowed us to explain the Whale Pump phenomenon and the nutrients this puts back into the marine environment. With the fog holding steady and plenty of great looks to take home with us, we said goodbye to Dross for now and made our way back to Boston. Despite the visibility challenges, it was a great day at Mid-Bank!

Today we headed out to a bright and sunny Stellwagen Bank; nothing like yesterday! After an absence of humpback whales on the bank, today was a regular smorgasbord of humpbacks. There were at least four or five in Midbank. We spent some quality time with both Mogul and Dross, separately. These fan favorite whales gave us many beautiful views of their flukes. Satisfied and sunburnt we headed back to Boston.

Today aboard the Asteria, the 10am whale watch made its way towards the middle of Stellwagen Bank in search of whales and other marine life.  After a little searching and some brief but awesome encounters with a few minke whales, we spotted a blow.  This blow came from a humpback whale named Dross!  The passengers and crew were delighted to see this fan favorite do some beautiful fluking dives right near the boat!  Dross also spent a lot of time cruising at the surface so we were able to get some really great looks at her.  Before we had to head back to Boston, we spotted another blow.  This blow came from Shuffleboard the humpback, who same right under our boat!  After a beautiful fluking dive from Shuffleboard we had to head back to Boston.

The 2:30pm whale watch headed out to the same area hoping for similar luck to the morning trip.  We were in luck when we spotted several blows as we arrived to the area.  We started on Dross the humpback whale who was doing her usual spending a lot of time at the surface.  She even blew a few bubble clouds and surfaced right near the boat!  We then got to spend time with another humpback whale named Mogul who was moving around a lot but we were still able to get great looks at this whale.  We got to briefly get a few looks at Shuffleboard the humpback who was also blowing bubbles and even lunged through them!  As we turned towards home, Mogul popped up a few more times allowing to get even more great looks at this magnificent whale!  Today was a really fantastic day out on Stellwagen!

We boarded the Sanctuary for the 12pm whale watch and headed for Stellwagen Bank. It was an absolutely gorgeous day out on the water, and upon reaching midbank, we saw a few scattered blows, deciding to settle on the humpback whale closest to is. This humpback whale turned out to be Mogul, who was taking very short dives and perusing the water column for food. We watched as he blew a deeper bubble cloud, surfacing among it with a mouthful of fish. While watching Mogul, we noticed a minke whale circling the area, and a small group of birds feeding on a bait ball at the surface. The calm seas and stunning visibility made for a wonderful day out at sea, and we enjoyed many spectacular looks at Mogul before heading home.

What a day! We spotted several northern gannets and Wilson’s storm petrels en route to the center of the Stellwagen Bank National Marine Sanctuary. The familiar mist of a humpback whale blow caught our eye and we cruised over for a peek and I was thrilled to see an old friend, Mogul. We watched as he took brief dives, blowing bubble clouds to catch an early lunch, then swam in a semi-circle likely going back for more each time. He even surprised us with an exceptionally close surfacing while the boat was out of gear and his slow and steady movements allowed our whale watchers to really experience the awe that is a humpback whale. Shuffleboard was nearby and we rounded out the morning with her and her signature high fluking dives. The sunny skies, calm seas, and great company made for an unforgettable morning!

The afternoon trip was an example of how you never know what you’ll experience on a trip, even between two on the same day. While we once again watched Shuffleboard and Mogul, the two whales spent a lot of time charging around, often coming up far from the location of their dive after gulping down more fish as evidenced by the bubble clouds. Shuffleboard was spotted several times surfacing with a lunge and ventral pleats expanded and swam directly under our boat at one point, giving passengers an unforgettable experience. The afternoon wound down and we observed Mogul traveling at near top speed (roughly 10 miles per hour) before slowing down, allowing us one final close look. Truly a fantastic day!