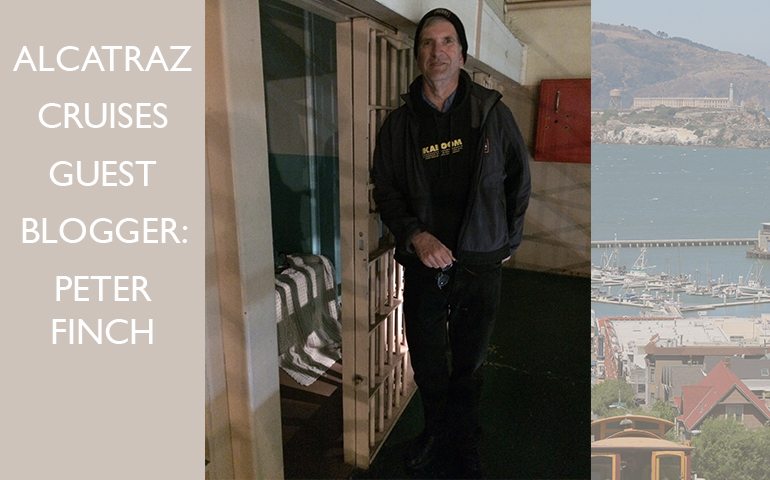 [Guest Blogger Peter Finch]
I work at Alcatraz island and I love it. I’m a history buff, and this is living history. Also, I enjoy my co-workers and supervisors and I get to meet people from all over the world.

Visitors arrive eager to learn about the famous prison. As a Visitor Service Representative, part of my job is to hand out audio players for the Cellhouse tour and explain how they work. Early on, I decided that it would be fun to teach myself how to explain how the audio players work in all eleven languages in which the tour is offered.
The first foreign language I mastered was French. I did this as an homage to my father, who had been a French teacher. Also, I had taken French for four years in middle school and high school, so I had a head start.

Before I go on, I’d like to thank Google for making this project so much easier. When I set out to learn the spiel in French, I logged on to Google and typed in “English-to-French translation.” Up popped two boxes. As I then typed in English in the left box, the French translation popped up in the right box. There was even a speaker I could click on to hear the French pronunciation. From there it was just a matter of practice, practice, practice.

Many students who study a foreign language are shy about trying to speak the language. They’re afraid they’ll get it wrong and embarrass themselves. Having embarrassed myself many times over the years, this was not a concern for me. Also, I find that most people appreciate it if you give their language a try.

While Google proved to be invaluable, I also found myself recruiting friends and acquaintances to help me with my quest. When I encountered someone who spoke a language I was trying to learn, I would have them record the spiel onto my iPhone so I could compare it to what Google was telling me.

Anyway, I started explaining the audio players in French to those who requested that language and it worked! In fact, I received many compliments on my French. Encouraged, I next tackled German. After I got that down, it was on to Spanish, Portuguese and Italian. However, I still need to learn how to explain the players in Japanese, Mandarin, Korean, Russian and Dutch.

Six languages into it, the reviews are good. Visitors understand me as I explain the audio players in their native tongue. The only time it gets awkward is when the visitor, assuming I’m fluent in their language, asks a follow up question. I then have to sheepishly admit that beyond explaining how the audio player works, I can pretty much only say “hello” and “thank you” in their language.

And then there was the time shortly after I learned how to explain the players in French that a group of twenty-eight French visitors showed up. Projecting well, I explained to the group how the players worked. It went well. In fact, I nailed it! Or I thought I had, but at the end I looked in their faces and…nothing. No smiles. No nods. Nothing. It was then that the tour guide turned to me and said, “they’re from Italy.”