The Twelve Seabirds of the Season in San Diego Bay 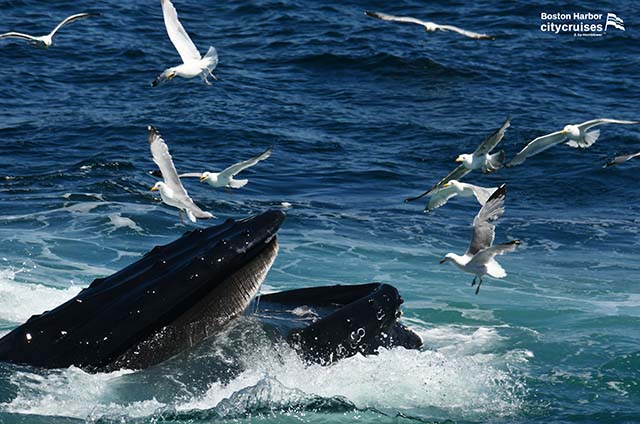 While whales are often the stars of a Hornblower Whale watching Cruises, cruising out to sea also provides a wonderful opportunity to see many seabird species. Here are 12 species that are occasionally seen during our winter whale watching season.

Western gull (Larus occidentalis)
This large gull is one of the most abundant and common gulls seen along the Southern California coast. Adults have distinctive dark gray and white plumage, a bright yellow bill and pink legs. Juveniles tend to have a more mottled brown and white coloration and a pinkish bill with a dark tip. Western gulls are excellent parents¬—both the mother and father bring food back to their young. The red dot on the parents’ bills provides a target for the young to peck at to queue their meal. Gulls are opportunistic predators, actively catching fishes and other aquatic animals, scavenging scraps and even stealing food from other gulls and seabirds.

Heerman’s gull (Larus heermani)
This striking gull has mostly light and dark gray plumage, a white head and a bright, reddish- orange bill tipped with black. Juveniles are an overall ashy brown with a much paler pinkish, dark-tipped bill. The Heerman’s gull nests on islands along western Mexico and then spends the non-breeding season farther north along the Pacific Coast of the United States and Canada. Since 90% of the species nesting occurs on a single island, Isla Rosa, the Heerman’s gull is a “near-threatened” species. It mainly eats fish; both fish that it actively hunts and also fish stolen from other seabirds and marine mammals.

Royal tern (Sterna maxima)
The royal tern is a large, orange-billed tern commonly found along the coast. The royal tern is mostly white with a light gray back, a short, forked tail and a yellow to red pointed bill. Adults have a black cap with a shaggy crest during the nesting season and a black band extending from each eye to the back of the head during the non-breeding season. Like other terns, this species plunge dives for fish.

Brown pelican (Pelecanus occidentalis)
The brown pelican is an iconic species, frequently seen along coastlines and bays throughout North and Central America and in the northern part of South America. This large, stocky seabird is grayish-brown, with a yellowish head, white neck and a distinctive, large yellowish bill. Juveniles are mostly brown with a white belly and a gray bill. During the nesting season, adults develop a striking reddish brown coloration along the back and sides of the neck and a dark throat-patch. Like other pelicans, brown pelicans plunge dive and scoop up small fishes in the large, flexible pouch of their bills.
Brown pelicans almost disappeared from North America due to use of the pesticide DDT in the 1960s and 1970s. DDT entered aquatic food chains through agricultural runoff and pelicans that ate DDT contaminated prey laid eggs with thin shells that cracked under the parents’ weight. Fortunately, brown pelican populations recovered after a ban on DDT in 1972.

Great blue heron (Ardea herodias)
The great blue heron is the tallest heron throughout North America; reaching a height of 4.5 feet (1.4 m)! Although it is tall, the great blue heron only weighs about 5 lb. (2 kg) due to its hollow bones¬—a trait shared by most birds. This statuesque heron is easily identified by its coloration, which is bluish gray overall with a white face, a dark stripe above each eye, and a crest of dark feathers. Like other herons, it uses its dagger-like yellow bill to spear fish while standing or wading in the shallows of the coastlines, bays and inland waterways.

Snowy egret (Egretta thula)
Adult snowy egrets stand about 24 in. (0.6 m) tall. These white herons are easily identified by their slim black bill, long black legs and bright “yellow slippers”. Snowy egrets are commonly spotted on mudflats, shorelines, and wetlands where they feed on a variety of small fishes, crabs and other aquatic animals. When feeding, they wade in shallow waters and use their bill to spear prey. They often use a sit-and-wait technique to hunt, occasionally using their bright feet to stir up prey from the bottom and then swiftly spearing any startled prey. They also actively pursue prey by running through the water with their wings flapping.

Double-crested cormorant (Phalacrocorax auritus)
This is the most commonly encountered cormorant found in saltwater and freshwater habitats throughout North America. They are a dull black seabird with a yellow facial patch just above the hooked bill. Juveniles have lighter overall coloration. This cormorant is named for the two feather tufts on top of an adult’s head during the nesting season. Cormorants swim at the surface then dive to catch fish, using their webbed feet to actively swim after prey. Following a dive, the double-crested cormorant dries out its wings by resting with its wings spread open in the sun.

Brandt’s cormorant (Phalacrocorax penicillatus)
The Brandt’s cormorant is an iridescent black seabird found in saltwater habitats along the Pacific Coast of North America. Adults have a pale patch at the base of the throat, a bright blue throat pouch and fine, white plume feathers on its head, neck and back during the nesting season. During the non-breeding season, adults are much duller in color while juveniles are also a much duller brownish black. Cormorants swim at the surface then dive to catch fish or squid, using their webbed feet to actively swim after prey. Like other cormorants, the Brandt’s cormorant holds its wings out to dry after diving.

Surf scoter (Melanitta perspicillata)
This sea duck is strikingly-patterned in black-and-white. The male is all black with a white forehead patch and a white patch on the back of its neck, and a white, orange and black patterned bill. The female is a lighter brownish-black with white patches on each side of the head and at the base of the mostly dark gray bill. Nesting takes place during summer in freshwater lakes in high-elevation forests and the tundra mainly in Alaska and Canada. Surf scoters can be found in winter along both coasts of North America where it can often be seen diving for mollusks, crustaceans and other aquatic invertebrates.

Pacific brant (Branta bernicla)
This small sea goose has a black head, neck and chest with a broken white “collar” in the upper neck region, a brownish back, a black to light gray belly, and a white rump. The Brant nests in the arctic on the tundra and spends winters feeding on eelgrass, sea lettuce and other aquatic plants along both coasts of North America. The Pacific subspecies of brant winters from British Columbia to Baja California, Mexico and can often be seen swimming and feeding in flocks during the late fall to early spring months in San Diego Bay.

Western grebe (Aechmophorus occidentalis)
The western grebe is a black and white grebe with a long neck, a spear-like, yellow bill, and red eyes. This species has a black back with black extending along the back of its neck and a black cap that extends below the eyes. The almost identical Clark’s grebe can be distinguished from the western grebe by the white face (its black cap does not extend below the eyes). Western grebes nest on freshwater lakes and marshes and overwinter in bays, estuaries, and sheltered coasts. They dive to catch fishes and occasionally crustaceans and aquatic worms. In the summer nesting grounds, adults perform an elaborate courtship display by rushing across the water with their necks extended.

Osprey (Pandion haliaetus)
The osprey is a common fish-eating hawk spotted in freshwater and saltwater habitats worldwide except Antarctica. These attractive birds-of-prey are black to brown and white and have hooked bills and yellow eyes. They have a reversible outer toe on each foot and barbed pads on the soles that let them catch and easily grasp slippery fish. Osprey pairs build huge nests of sticks and other vegetation that are added to each nesting season and used from year to year. Often these nests are built on sea stacks, dried tree snags, and even man-made structures such as light towers, utility poles, and artificial platforms. Some of these nests are decades old and can be 10 to 13 feet tall and 3 to 6 feet across.