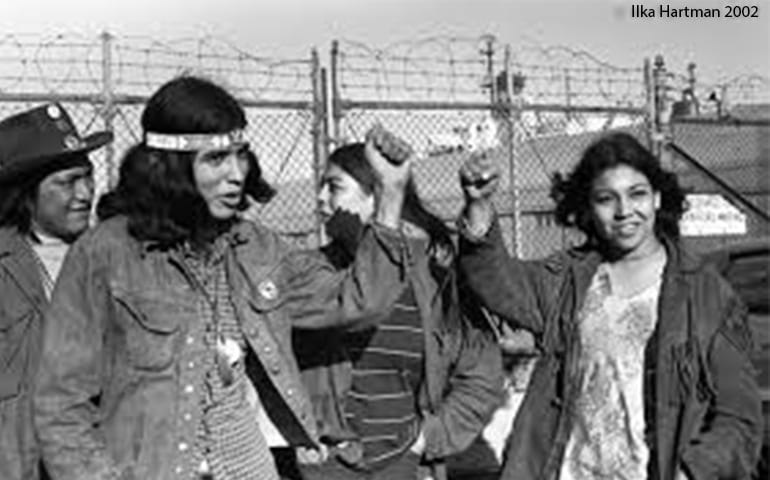 One of the most significant, yet often-forgotten, historical “landmarks” of Alcatraz Island is the Native American Occupation, which was in the forefront from 1969–1971.
Beginning on November 20, 1969, a group of Native Americans, known as Indians of All Tribes and mostly college students from San Francisco, occupied the island to protest federal policies related to American Indians. Some of them were children of Native Americans who had relocated to the city as part of the Bureau of Indian Affairs’ (BIA) Indian termination policy, which was a series of laws and policies aimed at the assimilation of Native Americans into mainstream American society, particularly by encouraging Native Americans to move away from the Indian reservations and into cities. A number of employees of the BIA also occupied Alcatraz at that time, including Doris Purdy, an amateur photographer, who later produced footage of her stay on the island.


The occupiers, who stayed on the island for nearly two years, demanded the island’s facilities be adapted and new structures built for an Indian education center, ecology center and cultural center. The American Indians claimed the island by provisions of the Treaty of Fort Laramie (1868) between the US and the Sioux. They claimed the treaty promised to return all retired, abandoned or out-of-use federal lands to the native peoples from whom they were acquired. Indians of All Tribes then claimed Alcatraz Island by the “Right of Discovery,” as indigenous peoples discovered it thousands of years before any Europeans had come to North America. Started by urban Indians of San Francisco, the occupation attracted other Native Americans from across the country.
The Native Americans demanded reparation for the many treaties broken by the U.S. government and for the lands that were taken from so many tribes. In discussing the Right of Discovery, historian Troy R. Johnson states in The Occupation of Alcatraz Island, that indigenous peoples knew about Alcatraz at least 10,000 years before any European knew about any part of North America.

During the nineteen months and nine days of occupation by the American Indians, several buildings at Alcatraz were damaged or destroyed by fire, including the recreation hall, the Coast Guard quarters and the warden’s home. The origin of the fires is disputed. The U.S. government demolished a number of other buildings (mostly apartments) after the occupation had ended. Graffiti from the period of Native American occupation is still visible at many locations on the island today.
During the occupation, President Richard Nixon rescinded the Indian termination policy, designed by earlier administrations to end federal recognition of tribes and their special relationship with the US government. He established a new policy of self-determination, in part because of the publicity and awareness created by the occupation. The occupation ended on June 11, 1971.