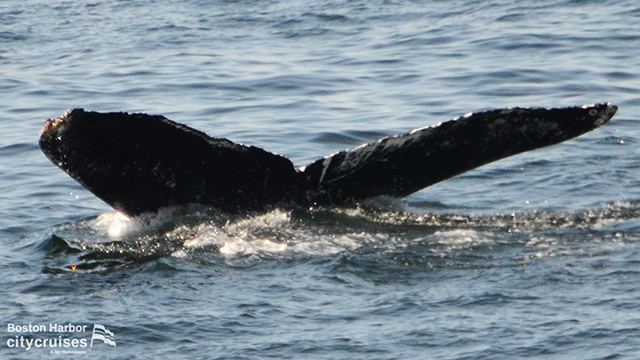 Please find the Naturalist Notes for the weekend of 4/15/22 to 4/18/22 from the onboard team of naturalists for our New England Whale Watching tour in partnership with the New England Aquarium.

A hearty group of passengers braved April swells and journeyed into the Stellwagen Bank National Marine Sanctuary in search of wildlife. After a bit of looking around, a sharp eyed passenger spotted the dorsal fin of two humpback whales just at the edge of the northwest corner. We followed the low-profile pair to the south, leading us to a massive flock gannets who began stirring and diving late in our time on the water. We cruised over to investigate and spotted three more humpbacks, several minke whales, and a large pod of Atlantic white sided dolphins. A gray seal engaged in a bit of a passenger-watch and another humpback surfaced nearby after we had pointed back toward Boston. There was an absolute frenzy of activity beneath the waves today and we can’t wait to get back out and to see more!

04-17-22 10am Whale Watch
The 10am whale watch headed out towards Stellwagen Bank in search of whales and other marine life. When we got to the northwest corner we spotted several blows all around us. We started on a pair of humpback whales, one of which turned out to be Clamp! We also spent a little time with Shuffleboard the humpback before heading out towards a larger group. There were several individuals in this group including Owl and Scylla. There was also a very curious calf in the mix. The calf at one point swam right up to the boat! We got some really great looks before we had to head back to Boston. It was a really great morning out on Stellwagen!

We spent a blustery afternoon aboard the Asteria heading for the Stellwagen Bank National Marine Sanctuary. Before we could even arrive at our destination, we spotted a skim feeding North Atlantic Right Whale! Maintaining a safe distance from this whale, we slowed down and took in the sights of this active whale before continuing our journey east. Upon arriving at the northwest corner of Stellwagen Bank, we met up with about seven scattered humpback whales! The majority of our time was spent with Scylla, who was blowing some deep bubble clouds. She was spending ample time at the surface, catching her breath after presumably feeding at depth. Also in the area were Highlighter and Diablo, both engaging in their own respective feeding behaviors. It is always so nice to see some of the fan favorites make their way back into the area, and we enjoyed their company until the clock determined we were out of time. We cruised back to Boston, having enjoyed another fantastic day on the water.

Flukes up!
Ashlyn and Colin

Today aboard the Asteria, the 10am Whale Watch headed out towards the northwest corner of Stellwagen Bank in search of whales. It was not long after we left the harbor that we spotted our first whales of the day. We spotted several North Atlantic right whales! We cautiously kept our distance from them and moved through the area. Once we made it to the corner, we spotted blows all around us. Most of these blows were from sei whales! We estimated that there were 12-14 sei whales who were all hanging out near the surface! We had several come swim right near the boat! Moving through the area we spotted several more right whales. We slowly maneuvered away from them over to more sea life. We spotted a very large group of gray seals! We also had great looks at a few fin whales, and several minke whales! We did get a brief look at a humpback whale who did a beautiful fluking dive towards us before we had to leave the area. On the way back we spotted several more right whales, two of which were just outside of Graves Light! It was a really amazing day out on Stellwagen Bank.