Skip to content
Europe / Enjoy a Perfect Picnic in Paris

Enjoy a Perfect Picnic in Paris 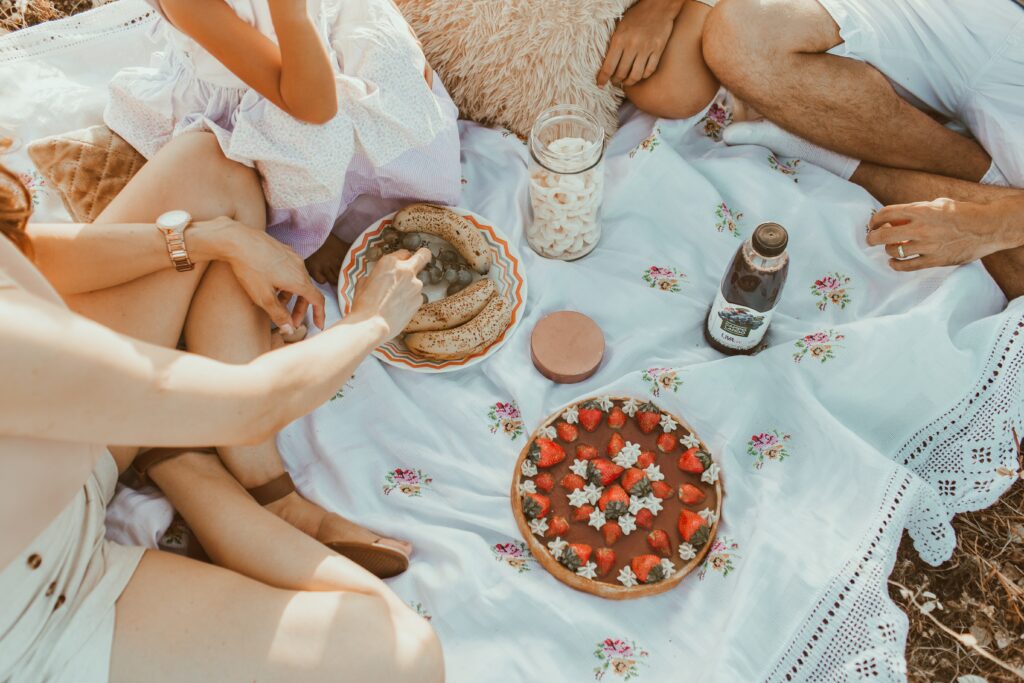 The City of Paris is A Great Place to Have a Picnic! A picnic is the perfect way to sit back on the grass with friends and loved ones to enjoy a meal, glass of wine, the outdoors, and have some good conversation. Bringing a blanket and basket with goodies also adds to the outdoor picnic atmosphere. 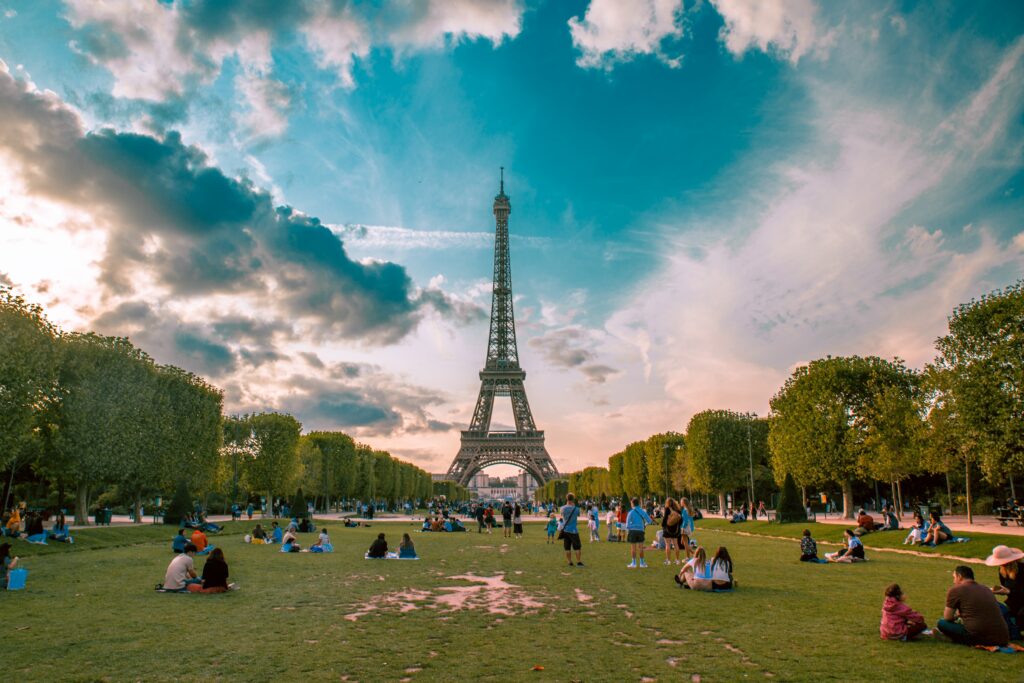 When you hear the word picnic, so many things come to mind. It can evoke a variety of ideas and memories from childhood to a fun date under a tree with food and even a first kiss.

While we celebrate National Picnic Day in the US on April 23rd, 2022, the term picnic is said to have originated from the French pique-nique and was first used in France in the 1600s. The term was “not originally for a meal held outdoors but rather derived from the French verb, piquer, meaning ‘to pick’ or ‘to peck,’ presumably at tasty morsels of food.”

By sometime in the 17th century, the French word then came to mean “dining outside on a blanket.” And then eventually piquer became what we know as picnic.

A Picnic in Paris

As National Picnic Day is almost here, why not find out about the best picnics in Paris from where the term most likely came. Paris, known as the city of love and the city of light, is a fine place for a picnic, especially as spring is here and summer is just around the corner. As a matter of fact, there are too many lovely places to name for that perfect picnic in Paris.

For the perfect picnic in Paris, bring along the perfect French cheese (spreadable is preferred), a baguette (or two or three), and a bottle of fine French wine to start. Bring water to hydrate. Also throw in some fruit and vegetables, bags of chips, and a large trash bag or two to clean up after yourselves. Remember the cups and plates, a knife, and the corkscrew to ensure that glass of wine gets poured. We’ll offer some top picnic spots.

A picnic with a view in Champs -de-Mar

Champs-de-Mar is a perfect spot for a picnic because of its quintessential view of the Eiffel Tower where construction was headed up by Gustave Eiffel. Construction started in 1887 and was completed in 1889. Open 24/7, Champs-de-Mar is just about the biggest green park in the capital city of Paris with a little more than 60 acres featuring exceptional trees.

Historically, the beauty of the park made it the perfect spot for many commemorations.

Today, as you walk alongside the lawns you’ll undoubtedly find a perfect spot for a picnic. Designed with the French gardens in mind, there are many winding paths to stroll. You’ll also happen upon ducks, swans, and moorhens. Maybe you’ll sit under one of the rare trees you’ll find along the way and enjoy your very own prepared Paris picnic.

The Champ-de-Mars was also a privileged place for universal exhibitions, which were an opportunity for heads of state to demonstrate their power.

Tuileries Gardens is right near the Louvre and boasts its own spectacular view of the Eiffel Tower. Known as “a breath of fresh air in the French capital” the park is almost 500 years old and anyone can stroll through the place that royalty once used as a playground.

Queen Catherine de’ Medici, who was Henri II’s widow, longed for the palaces she had known in her childhood. That is when in 1564 she instructed a palace and garden to be built. “The tile factories (tuileries) that had stood on the chosen spot since the Middle Ages gave the new royal residence and garden their name.”

It was designed in 1664 by André Le Nôtre who was Louis XIV’s landscape gardener. The park then was opened for “respectable folk” to enjoy its beauty. After Napoleon I and his nephew Napoleon III had the park modified, in 1871 it opened to the general public. 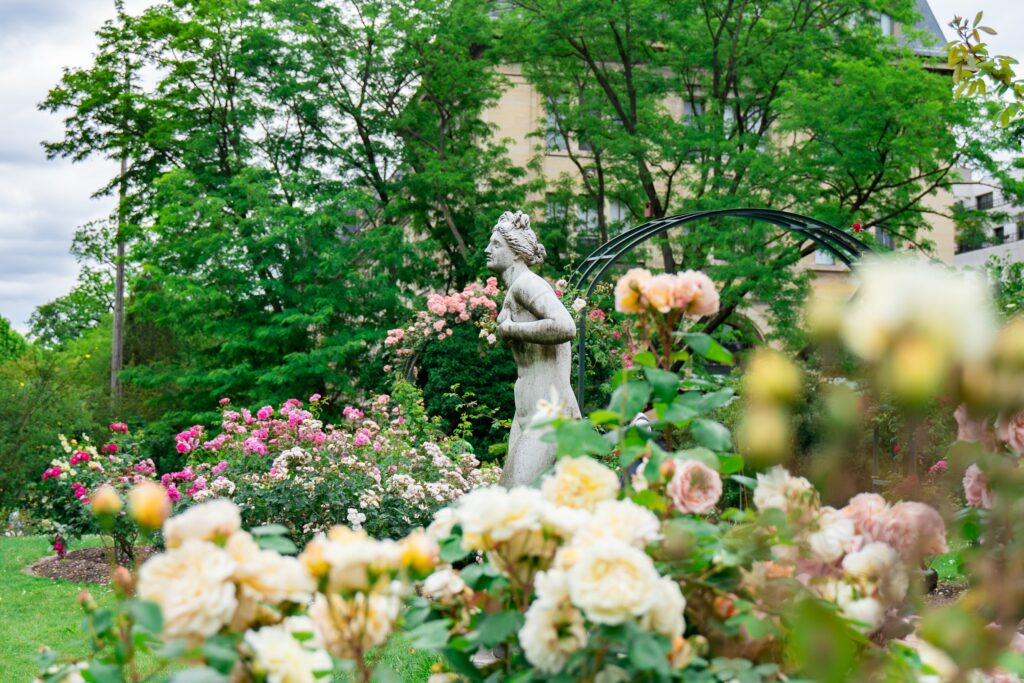 The Jardin des Plantes, formerly known as the Royal Garden of Medicinal Plants, has a history that started in May 1635 when Louis XIII decided “to make it a garden intended for the training of future doctors and apothecaries.”

At the time, the castle and the land were near the Seine River and was open to the public. Mostly it was the perfect place to study nature. The park is vast, at almost 60 acres, and holds an important place as “one of the oldest French scientific institutions after the Royal College.”

Today this grand area features exhibitions, a host of outdoor experiences, and the Garden of Plants. You can visit 11 gardens that come together to encompass one unique Plant Garden. You’ll enjoy the diversity of plants and a walk in the open-air spaces. 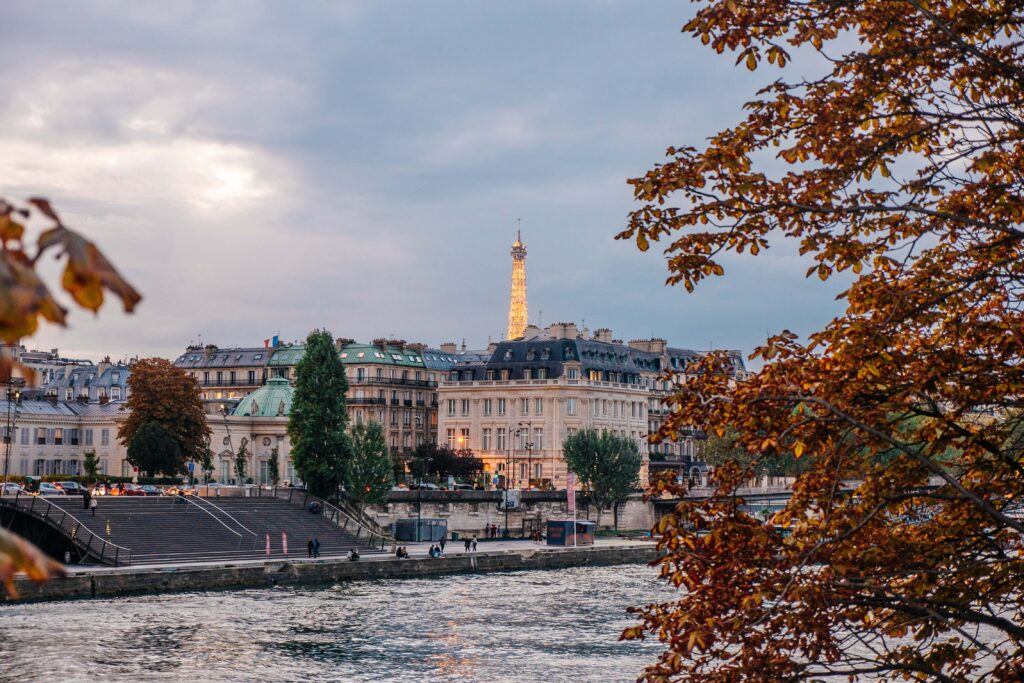 Jardin du Luxembourg was acquired by Marie de Medici between 1614 and 1631 in a suburb that was definitely quieter than the area surrounding the Louvre. The area is about 61 acres and influenced by the Boboli Gardens in Florence. The Luxembourg Gardens are located between Saint-Germain-des-Prés and the Latin Quarter.

The beauty of the gardens is evident in its split between French and English gardens. In between you’ll find a geometric forest and large pond. The park is also home to an apple orchard, an apiary, and greenhouses featuring orchids and a rose garden.

Along with a picnic, you can enjoy a variety of activities for children from puppets and rides. Adults can take part in chess, tennis, and remote-control boats.

A Romantic Picnic Along the Seine River

When you’re in France, the Seine River is a must see. It’s so integral to the city that you cannot miss it, plus it is also famous for its important place in European history. The Seine is the second longest river in France after the Loire and is 485 miles long, flowing northwesterly through the city. It then empties at Le Havre into the English Channel.

The banks of the Seine are a UNESCO World Heritage site. The city of Paris can be found on both sides of the river where you can see historic monuments, architectural highlights, and waterfront developments.

There are many spots to picnic along this great river where many come to do so on weekends and evenings. Some of the top places for picnickers is where the Seine splits, creating two “islands,” one of which is the Île de la Cité. Go across the street from the Jardin Des Plantes to the Quai Bernard, another wonderful spot to picnic and then go for a stroll along the bank. The Trocadero gardens is a nice area to picnic while gazing at the Eiffel Tower at night. Here you’ll avoid the crowds of the Champ-de-Mars but be right near the river.

Wherever you find a park in Paris, you’re apt to find a perfect picnic area. The more you find, the more wine and cheese you’ll be able to take in under the Paris sky.