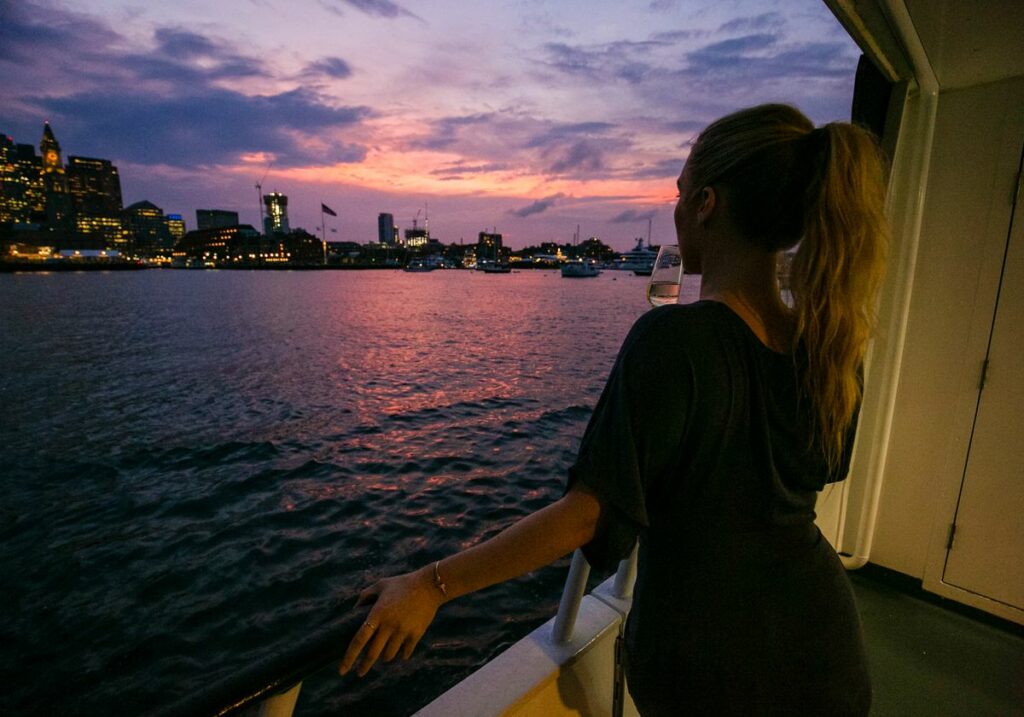 Full of historic architecture and fantastic ocean views, Boston Harbor and the Boston waterfront are among the Massachusetts capital’s best places to explore.

After going on a walking tour of the Freedom Trail,  you’ll need a place to grab some grub. These waterfront restaurants around Boston are the best spots for views and delicious dining, especially fresh seafood.

Opened within the last few years and enduring despite the pandemic, these recent additions to Boston’s waterfront dining scene offer a range of cuisines, price points, and aesthetic experiences at lunchtime. 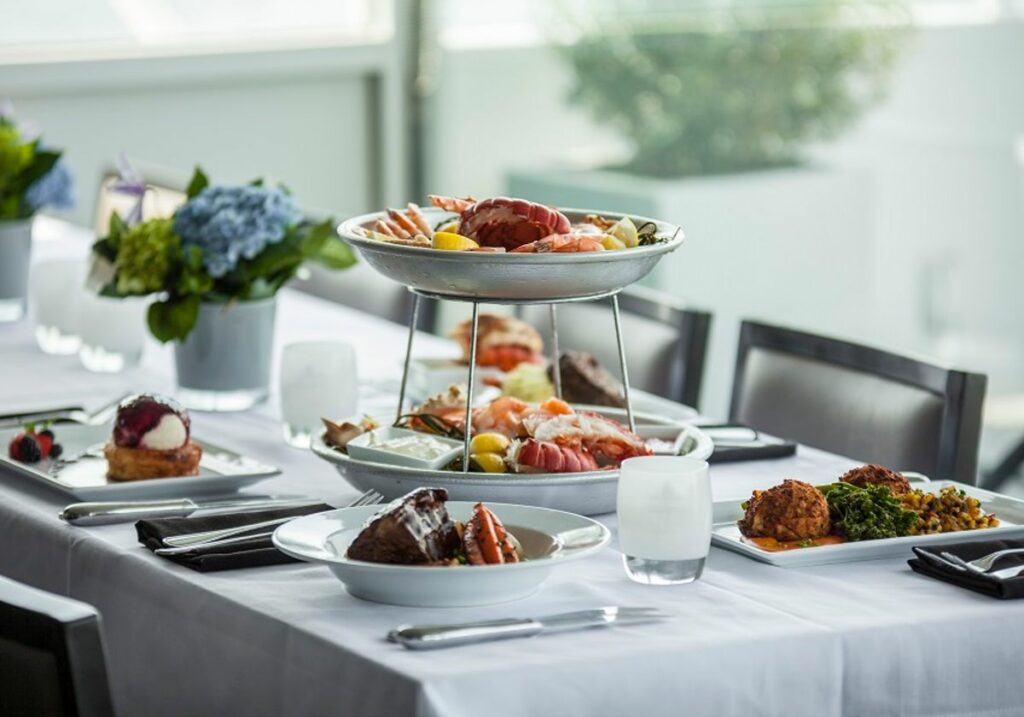 Situated in the Seaport area, close to the Institute of Contemporary Art and Fan Pier Park, Woods Hill Pier 4 is an elegant, upscale place for a waterfront lunch.

Start off with decadent appetizers, like caviar and shellfish platters, before moving onto mains, like butter-poached lobster and sustainably raised meats and vegetables from the owners’ Woods Hill farm.

Need a break from New England seafood? Head to the chic Temazcal Tequila Cantina in the Seaport area.

Here you’ll find modern Mexican cuisine with a regional twist (think: lobster guacamole). But there are also plenty of classics, like fish tacos or fajitas with Mexican fried rice. The delicious food pairs exceptionally well with an excellent tequila selection, which you can imbibe solo, in a margarita, or as part of a tasting flight.

If you want to escape the hustle and bustle of central Boston but stay in the metro area, head roughly 45 minutes south along the coast to the quaint town of Quincy, for lunch at this tranquil, laid-back waterfront spot. Lunch entrees include lobster rolls, pan-seared salmon, and shrimp tacos.

Most waterfront restaurants in Boston are found in the North End and Seaport districts, looking across the harbor toward East Boston. But if you’re dining at ReelHouse, the views are reversed, allowing you a unique perspective on central Boston from the indoor or outdoor seating areas.

Start lunch off strong with a fresh seafood tower before diving into delectable mains, like linguine and clams and pepper-crusted swordfish. 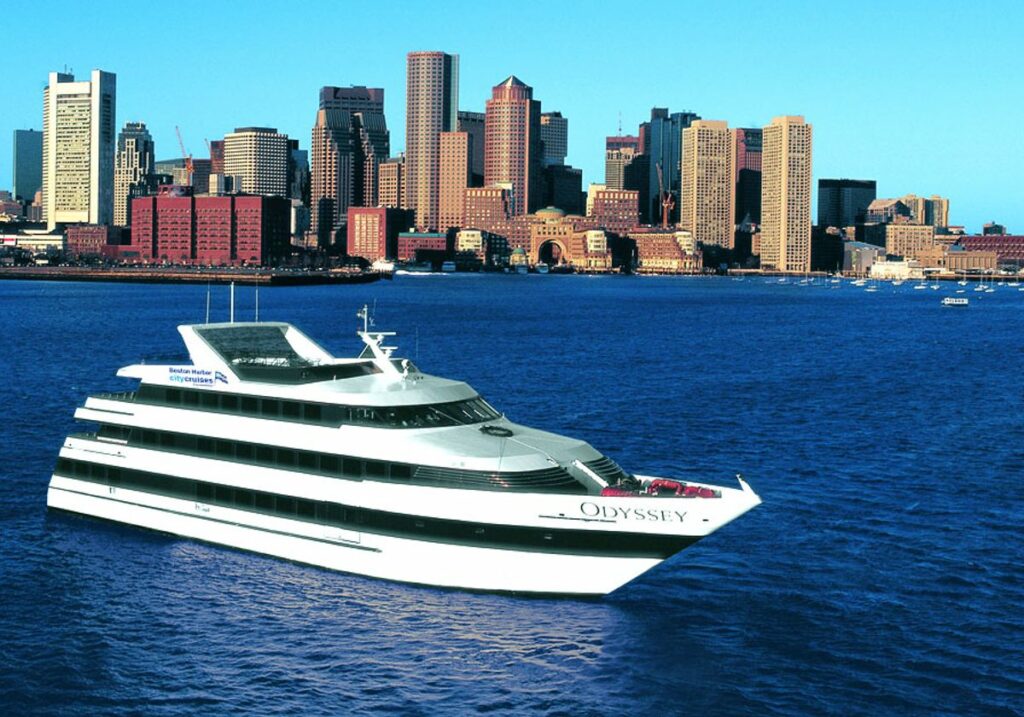 Looking at the waterfront views is all well and good, but what about actually being out on the water while enjoying a delicious brunch buffet with a nice glass of wine or beer with Boston Harbor City Cruises?

Going on a sailing brunch cruise aboard the Spirit of Boston is the ultimate Boston lunch experience, combining an amazing meal with sightseeing and unbeatable views of Boston from the water.

Situated at the point where Fort Point Channel meets Boston Harbor, the Barking Crab is one of Boston’s favorite seafood joints.

Offering indoor and outdoor seating, this restaurant is famous for its lobster rolls, New England clam chowder, and heaping seafood platters of crab and lobster.

It’s best known for its seafood offerings, like the New England lobster roll and fish and chips, served in a classy waterfront location. Chart House is also close to many of the top attractions in central Boston, such as the Christopher Columbus Waterfront Park. 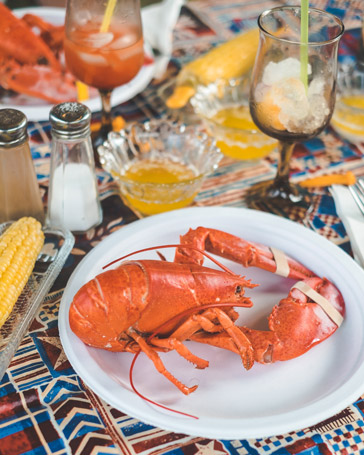 Open since 1984, lunch at this charming, maritime restaurant near the Paul Revere House in North End calls for its famous and hearty clam chowder, lobster mac and cheese, and other classic seafood dishes while admiring the views.

This no-frills but always spot-on flavor-wise eatery along the South Boston waterfront is one of Boston’s go-to spots for all things lobster, from the lobster roll (said to be one of the best in Boston) to crab cakes, seafood platters, and a raw bar slinging freshly shucked oysters.

In between discovering Boston’s history and natural wonders on Boston City Experiences tours, soak up views of the waterfront and Boston skyline at these great lunch spots.