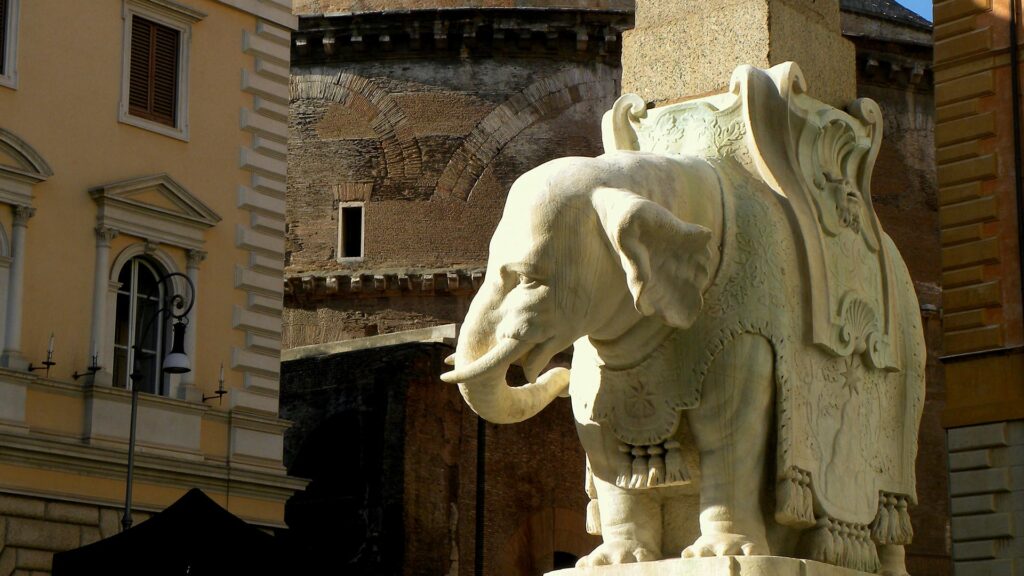 While a visit to Rome’s grand squares like Piazza Navona is at the top of everyone’s list, there is much more to the Eternal City. In this 360 tour, we’ll take you to Piazza della Minerva, one of Rome’s more peculiar squares, and a must-see for lovers of Bernini’s work. We’ll also take a trip to Piazza della Rotonda and pay a brief visit inside the amazing Roman Pantheon.

One of the smaller squares in Rome, Piazza della Minerva holds some interesting sites. Built during Roman times, the square derives its name from the Goddess, Minerva, the Roman Goddess of wisdom and strategic warfare. During the 13th Century, the decision was made to build a Christian Church on top of what was once a square dedicated to a pagan Goddess – and so the church of Santa Maria Sopra Minerva was born, a beautiful example of Gothic architecture and Rome’s only Gothic church. In the centre of the Piazza is an elephant with an Egyptian obelisk on its back, one of Bernini’s last sculptures erected by Bernini for Pope Alexander VII and possibly one of the most unusual sculptures in Rome. There are several theories which aim to decipher Bernini’s inspiration for the sculpture, some of which point to Bernini’s study of the first elephant to visit Rome, while others point to a more satirical combination of a pagan stone with a baroque elephant in front of a Christian church.

Just a short walk from Piazza della Minerva takes you to Piazza della Rotonda, where the Roman Pantheon stands in pride of place as the most preserved and one of the most influential buildings in ancient Rome. Remaining almost perfectly intact after over 2,000 years, the Pantheon is a testament to the genius of Roman architects. As we step inside this ancient wonder, we are taken back 20 centuries and given a chance to experience the grandeur of this once glorious empire.

Don’t forget to drag your mouse around the video screen for a full 360 view.

To our left we can see this incredible sculpture by Gian Lorenzo Bernini, it is an elephant with an obelisk on its back and actually an authentic Egyptian obelisk that comes from a sanctuary to the goddess Isis that was brought to Rome thousands of years ago.

And then most spectacularly we can see the dome of the Pantheon, the best preserved of all the ancient Roman structures in the entire world and an incredible marvel of engineering—that dome was completed in 125 AD. It is a masonry dome which is self supporting and freestanding—there are a series of arches inside of those walls and an ingenious construction of concrete, where the concrete at the base of the dome is more dense than the concrete at the top. They used materials like travertine, a heavier stone, and lighter stone like tufa to pumice at the top and the dome tapers from about 25 ft thick at the base to around 4.5 ft thick at the top. The dome has survived earthquakes, floods and miraculously it is still standing today.”

Piazza della Rotonda and the Pantheon

“You are now standing in Piazza della Rotonda, one of the most beautiful, historic, and atmospheric piazzas in the entire city of Rome. If you look over to your left hand side, you see this gorgeous Renaissance fountain and top of that if that is yet another Egyptian obelisk, but this one actually belonged to the pharaoh Ramses the 2nd, one of the most powerful of all the Egyptian pharaohs and is over 3,300 years old.

And then behind you, the beautiful porch and entrance to the Pantheon. The inscription that you can see at the top says “Marcus Agrippa, consul for the third time, built this”—he was the man who built this for the Emperor Augustus. As you look at the building today, we actually slope down towards the building, but in antiquity it would have been perched up in the air, the ground level has risen that much. Let’s go take a look inside.

You’re now standing inside of the Pantheon, the best preserved of all the ancient Roman structures in the entire world. In fact, this building is nearly 1,900 years of age. It is a perfectly symmetrical space, about 43 meters across and 43 meters high, 144ft x 144ft, and provides an incredibly immersive experience.

If you look to your left and right, you’ll see all the little crevices with statues of saints, as this was converted into a Christian building, and if you look to the top, you’ll see a hole at the very centre – that’s called the oculus “the eye”, and it’s about a 30ft wide structure which provides the only source of the light for the building, it provides ventilation and also allows the rain inside, which flows out of little teardrop drain holes at the center. It’s also the space where we, inside this earthly structure, connect to the heavens, the place of all the gods.”