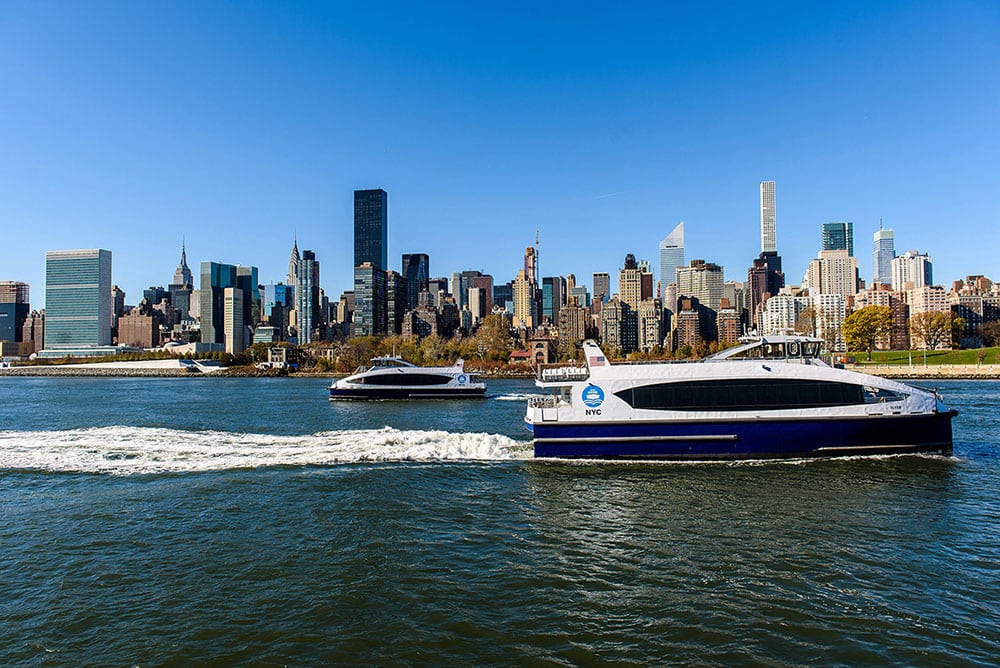 The designs show all the exciting features that the ferries will have including charging stations, concessions, Wi-Fi, space for bicycles and much more.

The ferry service will provide passengers with a completely modern transport experience. For those who weren’t already excited at the prospect of a commute via ferry, a quick look at the design and features will change all that.

“The greatest city in the world deserves the greatest ferry system in the world. That’s exactly what New Yorkers are getting with these modern, efficient boats that come with Wi-Fi, charging stations, and plenty of space to move around comfortably. Most importantly, when we launch Citywide Ferry next summer we will be connecting New Yorkers in transit-starved neighborhoods with good jobs and opportunities all over the city,” said Mayor Bill de Blasio.

Hornblower was selected as the ferry service operator in March and has been working with the NYCEDC to ensure the service will begin the first few routes in summer 2017. Work has already begun on the construction of the ferry landings and now the vessel designs are finalized, the next step is construction.

The New York Times published an in-depth report on the new ferry service, discussing the benefits and the difference it will make to transport in NYC.

Cameron Clark, VP and GM of Hornblower said, “Hornblower is working with leading designers and maritime experts to deliver a 21st century ferry product to New York Harbor that will make working, living and playing along the waterfront that much easier. The overall concept of these new vessels reflects our desire to deliver a system that builds on our strong record of environmental efficiency, sustainability and resiliency.”

Some of the features of the vessels include:

NYCEDC President Maria Torres-Springer said, “We’re excited to give New Yorkers a sneak peek at the brand new, state-of-the-art boats that will soon be connecting 21 landings around the five boroughs. Citywide Ferry Service is going to be a game changer, helping millions of New Yorkers access quality jobs and recreation along our city’s waterfront.”

Support for the ferry service is coming from all sectors of New York City.

Fred Dixon, president and CEO of NYC & Company, the city’s official destination marketing organization, welcomes the service, saying “The addition of citywide ferry service will give locals and visitors more reasons to explore the City’s vibrant and multicultural neighborhoods throughout the five boroughs. We welcome the new service and look forward to providing our visitors even better access to all of the excitement New York City has to offer,”

Roland Lewis from the Waterfront Alliance has also come out in support of Citywide Ferry, and praised the ferry designs, “”These new state of the art vessels will reduce wakes, minimize emissions and most importantly provide safe, quick and affordable transit to transit starved waterfront neighborhoods,”

The New York Harbor School has also put their support behind the service, “The Urban Assembly New York Harbor School, New York City’s only maritime high school, is thrilled to work with the city and Hornblower on the development of city-wide ferry service,” said Murray Fisher, co-Founder, UA New York Harbor School, “We have hoped and planned for this for over a decade. Not only are we excited to have the city, including our home on Governors Island, more connected than ever by ferries, our Career and Technical Education programs are currently training young New Yorkers to be able to drive, maintain and service these vessels.”

Council members have also been positive about the move, with Stephen Levin saying, “A more connected New York City waterfront, especially in traditionally underserved areas, means more options to get to and from where people live and work. I look forward to this initiative making the city more accessible to all New Yorkers.”

You can see more renderings below which include seating design and a look at all aspects of the vessels such as all the decks and external design. You can also download the renderings at the Citywide Ferry website http://www.citywideferry.nyc

The Citywide Ferry service will bring much needed, convenient transport to currently underserved communities all for the price of a Metro Card fare of $2.75. The service is estimate to carry an estimated 4.6 million trips per year across six routes.

Citywide Ferry would also like to hear from New Yorkers to learn more about what you want from the service. You can fill out a two-minute survey at http://www.citywideferry.nyc and be automatically entered for the chance to win one of five annual Citywide Ferry passes once service commences next year. Winners of the annual passes will be announced as Citywide Ferry gets closer to launch with one entry per person.

For more information about Citywide Ferry and to keep up-to-date with the progress towards its launch, please visit http://www.citywideferry.nyc.