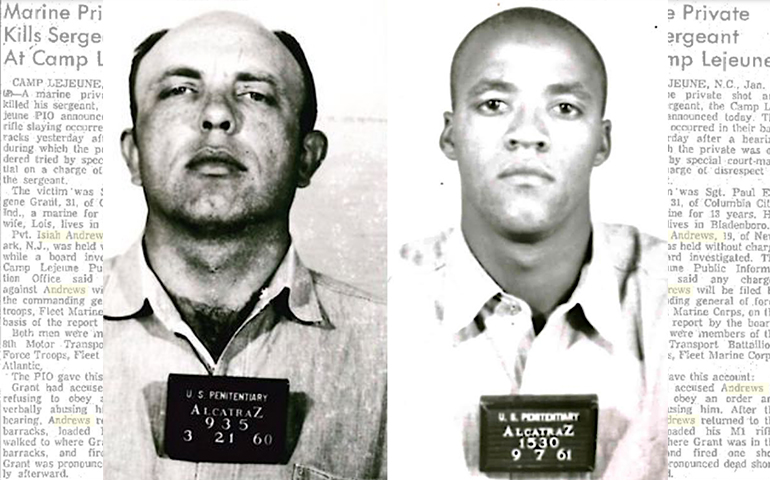 Visitors to Alcatraz Island listen to reformed ex-cons narrate part of the cellhouse audio tour. Their voices provide a genuine connection between past and present. Few realize that although the penitentiary closed in 1963, two inmates who were locked up at Alcatraz are still behind bars today. Convicted murderers Harvey Carignan (935-AZ) and Isiah Andrews (1530-AZ) are currently serving life sentences at state prisons.

Carignan is a serial killer who just turned 92 at Minnesota Correctional Facility in Faribault. His nicknames include “Harv the Hammer” and “The Want-Ad Killer.” By exploiting a legal loophole the ex-soldier avoided execution for the 1949 rape and murder of 57-year-old Laura Showalter in Alaska. The Supreme Court ruled that his confession had been unlawfully elicited by police.

He was resentenced and transferred to Alcatraz where he spent nine years before being paroled in 1960. He continued to kidnap, rape, and bludgeon to death an unknown number of women using a hammer as his weapon of choice until authorities caught him in 1974. In separate trials he was convicted of two murders and two sexual assaults. Chief investigator Russell Krueger once referred to Carignan as the “most evil individual” he ever met.

Andrews, 81, is incarcerated at Ohio’s Richland Correctional Institution for the 1974 slaying of his wife Regina in Cleveland. He has maintained his innocence and recently won an appeal to have the case evidence tested for DNA. The appeals court called the pending DNA test “critical” to determine if Andrews is in fact guilty. He previously served 15 years in federal prison for murder including a stint at Alcatraz.

In 1958, he shot and killed 31-year-old Sgt. Paul Grant who reported him for insubordination at Camp Lejeune, North Carolina. Grant was a veteran of WWII and Korea who left behind a pregnant wife. Their daughter committed suicide in 1973, the same year that Andrews paroled. He soon returned to prison for killing his wife and then briefly escaped from Lucasville in 1976. He has declined all requests to discuss Alcatraz.

DNA results may cast doubt on Andrews’ guilt, but Carignan will assuredly die in prison. Two other ex-Alcatraz inmates have died behind bars in recent years. Both were former FBI Ten Most Wanted Fugitives. In 2016, bank robber Frank Sprenz (1414-AZ) passed away at 86 in Ohio’s Grafton Correctional Institution exactly one month after being denied parole for manslaughter. Last year Boston gangster and prolific killer James “Whitey” Bulger (1428-AZ) was beaten to death by inmates at USP Hazelton in West Virginia. He was 89.