Returning a Piece of History to Niagara Falls

Canada » Returning a Piece of History to Niagara Falls 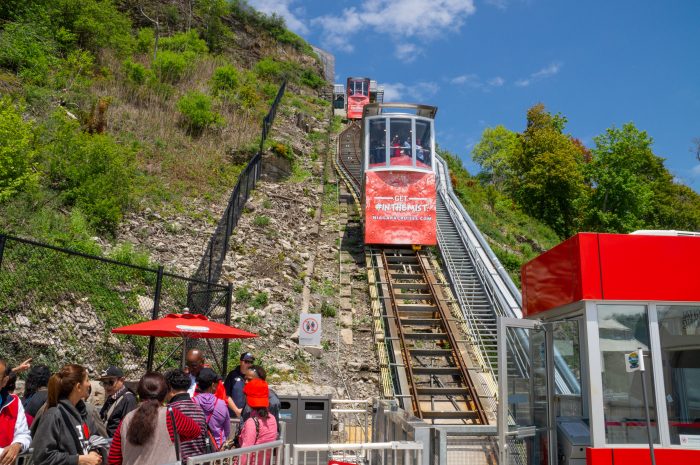 For the first time in three decades, a funicular is transporting people into the Niagara Gorge

NIAGARA FALLS, Ont. — For nearly a century, an incline railway was transporting visitors into the Niagara Gorge, the first stage of a journey to an unparalleled view of Niagara Falls.

Today, that ride — with a spectacular vista — returns after a 29-year absence with the official grand opening of the Hornblower Niagara Funicular. With twin rail cars each capable of carrying 50 passengers down to where Hornblower’s twin catamarans the Niagara Thunder and Niagara Wonder are docked, the Funicular has a classic look with all the modern conveniences — including climate control.

“When we were awarded the opportunity to be the official and only boat tour operator in Niagara Falls in 2012, we made a commitment to restore the incline railway,” says Mory DiMaurizio, Vice-President and General Manager of Hornblower Niagara Cruises. “We made this commitment as part of our promise to enhance the whole experience of a voyage to the base of the Falls. This year, we are excited to deliver on that commitment and bring the funicular back to life.”
The Clifton Incline first opened in 1894, and while it was improved over the decades the ride was ultimately decommissioned in 1990 and replaced with four elevators. The recently modernized elevators remain in place as a complement to the Funicular.

The new $7-million Funicular follows the same path as its predecessors, but runs with all new and modern systems and along a new track. It continues to boast unobstructed panoramic views of the Gorge and the American, Bridal Veil and Horseshoe Falls.

The Funicular incline system was designed and built by AnCam Solutions from Oakville, Ont., with the utmost respect for the historic and natural environment of the Niagara Gorge. In keeping with Hornblower’s Respect Our Planet initiative, most of the strata walls and vegetation were untouched during construction in order to preserve the natural surroundings of the Niagara Gorge.

Furthermore, each of the cars is equipped with solar panels on the roof and are connected to each other by a cable, which runs through a pulley at the top of the Gorge. The counterbalance reduces the energy needed to lift the cars to the top, making it an energy efficient mode of transportation.

It is also rare — designed, built and operated by Canadians, it is only the fourth operating funicular in Canada and the only one that employs a bypass switch for the cars to pass each other. Besides the Falls Incline Railway just up the street from the Hornblower Funicular are inclines in Quebec City and Edmonton.
“Working with the Niagara Parks Commission and our tourism partners, we continuously strive to help visitors make more memories in Niagara Falls,” says Mr. DiMaurizio. “This unique experience, Niagara’s newest attraction, will certainly help achieve that goal. It provides a unique view unlike any other.”

HORNBLOWER NIAGARA FUNICULAR BY THE NUMBERS:

About Hornblower Niagara Cruises:
Hornblower Niagara Cruises, the official Boat Tour operator for the Niagara Parks in Niagara Falls, Canada, part of The Hornblower Family of Companies; a North American company based in San Francisco, California, with more than 100 vessels and 30 years of experience operating various types of marine services across the east and west coasts.  As Canada’s most memorable visitor experience, the Niagara Falls boat tour operation hosts millions of visitors a year. In September 2018, Hornblower welcomed its 10 millionth visitor.