Machine Gun Kelly and His Lost Years on Alcatraz 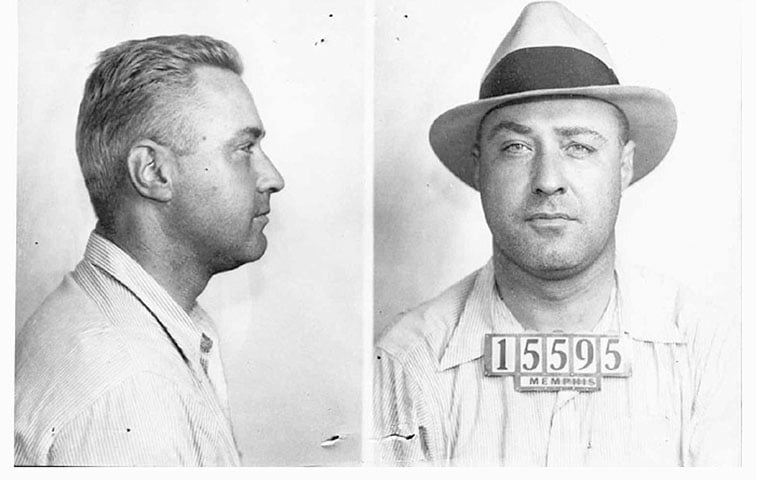 These five words seem to be written in fire on the walls of my cell “Nothing can be worth this.”

When the United States Federal Penitentiary opened on Alcatraz Island in August of 1934, it was to become the symbol of America’s war on organized crime. Alcatraz was designed to take America’s criminal kings, strip them of their fame and public notoriety, then lock them away into a state of seclusion so fierce that they’d be forgotten for decades.

In the late 1930’s, Attorney General Homer S. Cummings commented, during an interview with Collier’s Magazine, that George “Machine Gun” Kelly and his associates had helped shape the Alcatraz concept into reality.

Men like Machine Gun Kelly and Al Capone often dominated the headlines of America’s most prominent newspapers. Alcatraz was to serve as the government’s solution to halt organized crime and silence the czars who smiled at cameras in defiance of law.

The Collier’s interview brought to focus the government’s dilemma that we needed some place where the “end products” of our law enforcement system could be incarcerated. We needed a place for ingenious “escape artists” and for those who are intractable, break down discipline or seek to maintain contact with the underworld. By summer of 1933, the kidnapping law that had been enacted the year before was bringing into the federal courts a particularly dangerous type criminal. If convicted, he was destined to serve a life term.

This is the case of George Kelly or “Machine Gun” Kelly as he’s best known in most households. On Alcatraz he’s known only as Prisoner #117. Alcatraz was conceived to protect the public from criminals like Kelly and those who chose to emulate him. Men like George Kelly and Al Capone are special class criminals that place the public at large in a grave state of risk.

These criminals look like businessmen and movie stars. They are sharply dressed, charismatic and their smiles glow in the news photographers’ blinding bursts of light, but behind those smiles and expensive suits are the worst breed of men. Kelly, his wife and other accomplices kidnapped Charles F. Urschel, one of Oklahoma’s wealthiest men, and held him for a $200,000 ransom. Urschel’s life was at certain risk and had it not been for the fine work of J. Edgar Hoover and his Bureau, Kelly may have instead faced charges for murder.

In prison, Kelly and his men continued to gain favor even with some in law enforcement. Kelly’s close associate Harvey J. Bailey, also a notorious criminal and gunman, escaped from the Kansas State Penitentiary at Lansing, Kansas on May 30, 1933. He was serving a sentence of 10 to 50 years on a charge of robbing a bank at Fort Scott, Kansas. He also was wanted in connection with the murder of three police officers, an FBI special agent and their prisoner, Frank Nash in Kansas City on June 17, 1933.

In jail, Bailey bribed Deputy Thomas L. Manion at the Dallas County Jail, who placed money before duty and smuggled a pistol and hacksaw blades into the lockup. Bailey escaped from a 10th floor holding cell and was later captured. This very act brought to light that Alcatraz would be the iron stop to corruption and it would permanently lockdown the most hardened and corruptive class of criminal. Equally, it would employ only the most experienced, tried and tested officers…men who had solid track records for holding a hard line.

The exteriors of these men were deceiving, and in the case of Kelly, it also held true with his wife. Katheryn Kelly who had a pretty exterior but was also an apt criminal. Katheryn had been married four times between her fourteenth and twenty-sixth birthdays. During the late 1920s, she ran a shady hotel with her mother in Fort Worth, Texas and it was believed it was here that she became associated with criminals. Both she and her mother had received life sentences for their roles in the Urschel kidnapping case.

Perhaps no prison should ever be dubbed “escape-proof,” but Alcatraz was about as close as it gets. It’s amazing that there had not been more attempts at escape. The answer lied in the strict discipline on the island, the constant watchfulness of the guards and the shrewd manner in which the warden administered every phase of the institution. Every guard was qualified as a sharpshooter or an expert pistol man. Alcatraz was a secure place for desperate men.

George Kelly arrived in one of the first and largest groups of prisoners transferred to Alcatraz. They arrived from Leavenworth by railroad and arrived on September 4, 1934 with a total of 106 convicts. Kelly was thirty-nine years old when he arrived on Alcatraz and he would be subject to the toughest menu of conditions that the Federal Bureau of Prisons had to serve. It was the era of the silence rule and considered the toughest years of the prison’s history. His criminal accomplices in the Urschel kidnapping, Harvey Bailey and Albert Bates, would serve alongside Kelly. They maintained a close friendship during their years on the Rock.

Willie Radkay, who was serving a 20-year sentence for bank robbery, developed a close relationship with Kelly during the 1940s. Radkay, who celled next to Kelly on the main corridor known as Broadway, described Kelly as a “deeply reflective and intelligent man who was well liked by most of the population.” Kelly loved to read the classics and books about the Old West. He held a reputation for boasting on incessantly about his early crime escapades.

Dale Stamphill, a prisoner involved in the failed escape with Arthur “Doc” Barker in 1939, felt Kelly was out of place in prison. “He told big fish stories. The cons called him ‘Pop Gun Kelly’ after cork guns that were popular with kids. Kelly would laugh it off, but the guys didn’t take him seriously and I think that got to him. We spoke a lot when I worked in the tailor shop. His rap partner Bates died of heart attack right around that same time while on Alcatraz. He took it hard. You start to see the reality of a bleak future.”

Willie Radkay commented that some inmates found Kelly’s big stories irritating, but he on the other hand, enjoyed the good company and long conversations. “He was a damn good friend to pass the time with.”

The strain of prison life and harsh regimen was tough on Kelly. His letters often showed desperation and hopelessness. In February of 1936, Kelly wrote Attorney General Homer Cummings offering an idea that he be dropped at the South Pole to conduct meteorological studies. He felt it would give his life purpose and provide an opportunity to contribute to society. Kelly wrote in part:

Cummings considered it a cheap ploy to orchestrate an escape and rejected his offer.

Then, in April of 1940, Kelly wrote his victim to both apologize and express his state of despair over the harsh conditions…here’s what he had to say:

Kelly’s letters to Katheryn were equally as sad. They spoke of their love for each other, sometimes with hope they’d be able to live their later lives together quietly and other times surrendering to the reality that they may never see each other again. Kelly also sent numerous letters to prison officials begging for a transfer or improved conditions on Alcatraz, sometimes commenting as a spokesperson for the convicts.

He wrote to several government officials over the course of a decade. In one letter he wrote on the conditions: “Regardless of what you have heard about Alcatraz, it is far from being a pleasant place to do time. The climate is murderous and I, personally, have suffered from chronic sinus trouble for years. The recreation facilities are practically nil. I realize that is the way the department wants it but to me, it seems like there is an exceptionally wide discrimination shown between the men of Alcatraz and the men in the other Federal Institutions. I should like to be where I could read a newspaper and listen to the radio for a change after ten years here.”

Like many Alcatraz prisoners, Kelly became fanatical about playing bridge on weekends in the yard. Even in the coldest conditions, Kelly lived to sit on the yard and play bridge. During the week, Kelly worked as a clerk in the industries and Radkay commented that he loved reading the stories of the old west. Aside from participating in two work strikes in the later 1930s, he served his time quietly and made only occasional complaints about conditions and hope for a transfer. In all, George “Machine Gun” Kelly would serve nearly seventeen long years on Alcatraz.  He was finally transferred to the Federal Penitentiary in Leavenworth, Kansas, arriving on June 1, 1951. Convicts were permitted to listen to the radio and enjoyed more freedoms than on Alcatraz.

At Leavenworth, Kelly complained that guys followed him on the yard wanting to meet him and hear stories and it took away from his own interests. Radkay, who transferred to Leavenworth in August of 1952, later remembered that a bunch of the old Alcatraz cons ended up on the same tier and there were also several old officers from the island working there: “It made life easier on everyone and George, me and Frankie Delmar, who worked together on Alcatraz, reconvened together at Leavenworth.” The three remained close friends always talking about Alcatraz.

Radkay continues, “Madigan [Alcatraz Warden] once came to visit us and we all met in the dining hall by ourselves and got caught up on what everyone was doing on the Island. We lost a good friend when George died, and then not long after, Frankie also died there. That was a lonely time for me. Both Frankie and George were my best friends. The walks on the yard were never the same after they died. Frankie had no family and he was just forgotten. It always brought my spirit down whenever I walked the yard alone thinking about him and George.”

Kelly’s medical records showed that he had suffered from high blood pressure going back to the mid-1940s and began experiencing moderate symptoms of chest pain while at Leavenworth. In the early evening of July 16, 1954, Kelly was admitted to the prison hospital complaining of moderate chest pain and shortness of breath. At first, the pain was relieved, but then shortly after midnight, on his 59th birthday, George Kelly died from a heart attack.

Kelly’s death was a sad end to a less than glamourous life of crime and serving more than twenty hard years in prison. He never lived to see Katheryn again and he never was able to see the freedoms he dreamed of for so many years. Kelly’s wife was released from prison in 1958 and she blended quietly back into society settling in Oklahoma City until her death in 1985 at age 81.

Those who knew Kelly, including officers, always had pleasant memories of him. He was a good clerk and everyone felt he should have been a bank president instead of bank robber and kidnapper. Today, you can visit the locations in the Industries Building where Kelly worked and walk the same stretch of Broadway where he lived for almost two decades. You can even imagine staring at the wall and “feel” those words written in fire, “Nothing can be worth this…”