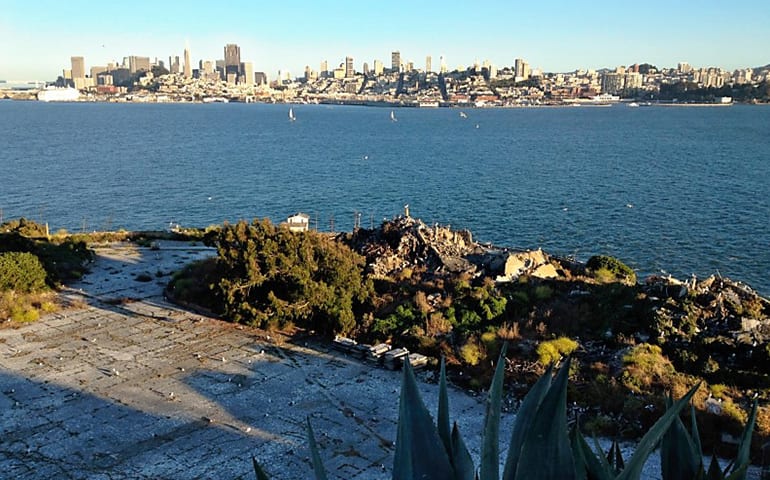 Looking to Enhance Your San Francisco Bucket List? Here Are Some of Alcatraz Cruises’ Favorite Hidden Treasures!
For the alley cat:
It’s hardly a secret for longtime city dwellers, but if you’re new to San Francisco, be sure to visit Belden Place. The “French Quarter of San Francisco” is a lovely little alley off the Financial District filled with European-style dining. At night, it’s magical.


For the twisted:
One of the most beautiful perches in San Francisco is Lands End, where the bay meets the Pacific Ocean. In addition to the picturesque hiking trails, curiosity seekers should find their way to the labyrinth at Lands End where views of the Golden Gate Bridge and Marin Headlands create the stage.

Twister number two:
Atop Nob Hill, boasting grand architecture, Grace Cathedral is a vision worth exploring. In addition to the grandeur, the cathedral also features a labyrinth in which visitors can lose themselves and get centered.

For the obscure:
Though it looks a little hokey, the ocean-front Camera Obscura attraction, located next to the Cliff House, has some weird and magical qualities that draw visitors into its obscurity.

Free summer concerts:
Every Sunday in the summer, Stern Grove offers up headline bands in a beautiful eucalyptus saturated park…for free. Past concerts range from Kool & The Gang and Ziggy Marley to the San Francisco Symphony and San Francisco Ballet.

For the stairmaster:
If you’ve already made the trek up the Filbert Steps, try the nearby Greenwich Steps. The lovely, verdant stairway used to lead to the Gold Rush semaphore, which signaled to San Franciscans what types of ships were coming into the port. You can get to the Greenwich Steps from anywhere on downtown Market by taking the F streetcar inbound and exiting at Greenwich and Embarcadero.

For the history buff:
Check out the San Francisco History Center on the sixth floor of the San Francisco Public Library. The collection has books, photos, maps and so much more and functions as the city’s primary archive.

For those that want a different perspective:
The view from the top of Mt. Davidson is the highest point in San Francisco. There are two events that draw people there: Easter morning dawn services and Armenian Remembrance Day. Otherwise, there’s never anyone there, so it is a great place to find solace. It’s an easy 10-15-minute walk to the top.

For art lovers:
Inside the old U.S. naval shipyard at Hunters Point, there’s an incredible hive of creative activity. More than 250 artists rent studios in the space and you can see some of their work at their spring and fall open studios.

For music lovers:
SFJAZZ is a recognized international leader in jazz creation, presentation and education, exploring the full spectrum of jazz, from the music’s origins in the African American community to its diverse present-day expressions around the world.

For Lunar New Year and beyond:
The Asian Art Museum is one of San Francisco’s premier art institutions and home to a world-renowned collection of more than 18,000 Asian art treasures spanning 6,000 years of history.

For the whimsical:
The quirky Sunnyside Conservatory, which is tucked between City College and Glen Park in the Sunnyside neighborhood, was resurrected by neighbors and preservationists in 2009 after a $4.2 million restoration project. The surrounding garden is filled with 23 small bronze sculptures. Lit up at night, it’s a stunning sight.

For the child in you:
Golden Gate Park is an obvious attraction for locals and visitors alike, but Children’s Playground is an adventure not often explored. From long curvy slides to over-the-top climbing structures, it’s an entertaining work out. (Note: adults must be in accompanied by a child in order to enjoy.)

For the housing curious:
While visiting Ocean Beach, be sure to walk down the Great Highway and for a sneak peek of Carville, a housing phenomenon where houses were built out of old street cars. In 1901, 50 families lived in 100 converted cars. Most have since disappeared, but there’s a prime example at 1632 Great Highway.
It’s all in the park:
Head over to 301 Naglee Street to visit San Francisco’s most unique park, namely Cayuga Playground in the Excelsior District, which was slowly transformed over 30 years by gardener Demetrio Braceros. Along with themed gardens, art pieces have bloomed all over the four-acre park.