Skip to content
News & Announcements / Hornblower ‘pumped up’ for 2018 season

Hornblower ‘pumped up’ for 2018 season 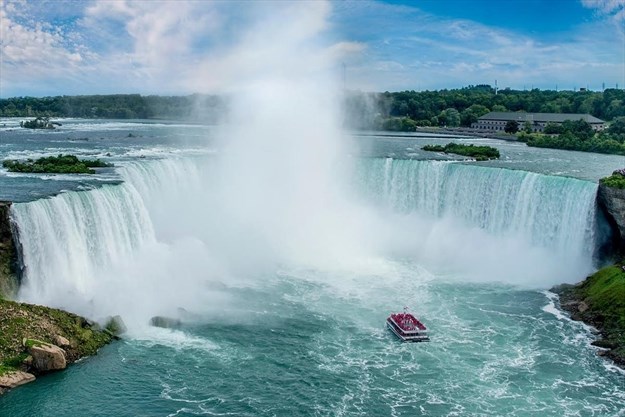 Special to The Niagara Falls Review


Despite a later start, Hornblower officials are “pumped up” to kick off their fifth season May 5.
During the past two years, the attraction’s season began April 1.
But a long winter and a rough start to spring has pushed this season’s start back by a month.
“This year we were hopeful to open actually March 28 because we wanted to capture the Easter weekend, but Mother Nature didn’t see things the same way as us,” said general manager Mory DiMaurizio.
“We try and get the season open as quickly as possible. Nevertheless, it was a brutal winter — lots of lake ice, lots of river ice and safety is a priority. We need to make sure that all the ice is out of the river before we start even thinking about carrying passengers. We’ve got some equipment in the water already. We’ll go through our regular season start up checks and certification with Transport Canada, and then by May 5 we are set to sail carrying passengers.”
DiMaurizio said Hornblower typically concludes its season Nov. 30, but a couple years ago extended the season until Dec. 4 at the request of the Niagara Parks Commission to participate in the Winter Festival of Lights.
“Typically, it’s Nov. 30. After that, the tourist season does tend to slow down a little bit and there’s also the safety factor as well. If it’s extremely cold and you start to get some ice, then it’s not so much of a pleasant experience. Of course, if the weather is (good), if tourism is still going, if the parks commission approves, then, of course, we’ll keep going (beyond that).”
The boat-tour operator is coming off back-to-back seasons of record-breaking ridership numbers.
Its 2017 season saw 2.3-million visitors.
DiMaurizio said whether Hornblower experiences another record-breaking season will depend on the weather.
“If we have a nice, sunny, dry summer then we have no problems at all, but if it’s a cool, wet summer, well, we are weather dependent, right? We definitely appreciate the importance of getting the boats in the water and kicking off the season and what that means to Niagara Falls and tourism. We are definitely all pumped up, all ready to go to have another wonderful season taking care of a couple of million, 2.5-million tourists this year.”
A highlight this season for Hornblower will be its new and modernized incline.
The $5-million investment will operate along the Niagara Gorge offering unobstructed and panoramic views of the falls.
The two, 56-passenger, fully glass enclosed cars will ascend and descend along the 185-foot and 18,000-year-old rock walls.
The cars are designed to optimize the guests’ viewing experience as well as offer many comforts and conveniences including exclusive group check-in; express admission to the Hornblower landing; climate-controlled cars; wheelchair accessible seating and an informative in-car audio.
Hornblower’s group check-in also recently underwent major redevelopment at the foot of Clifton Hill with a brand new 250-square-foot building to sell group tickets.
“We have many new experiences and products we’re excited to be launching this season,” said DiMaurizio.
“The Hornblower Niagara incline has been a major focus and development for the past one-and-a-half years and we are thrilled to see it come to fruition in the next month. It will add an extra element to group tours and private events booked with us giving a new way to elevate an event experience.”
Meanwhile, on the U.S. side, the Maid of the Mist launched its 133rd season Friday.
The season is expected to run through Nov. 4.