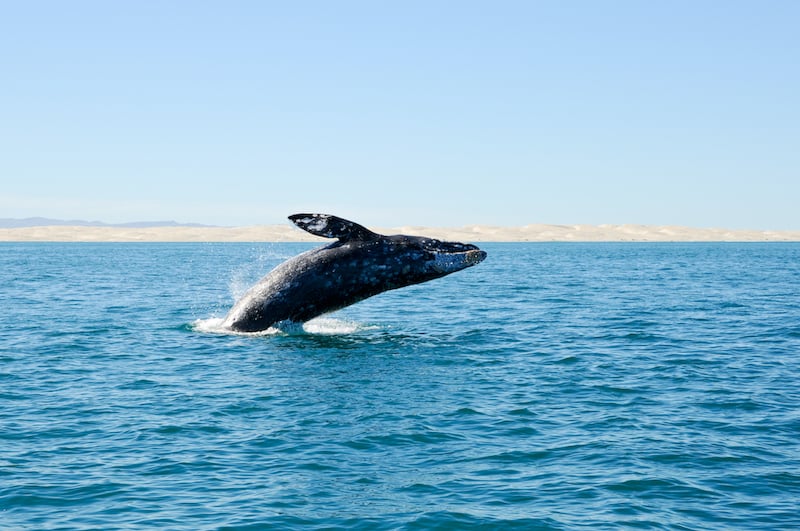 Description: The average size of a gray whale is approximately 11 to 15 meters (36–50 feet) long, and it may weigh up to 45,000 kg (49.6 tons). Like other baleen whales, females grow larger than males. Seen from above, a gray whale’s body tapers at both ends, and is a dark slate color that can appear mottled gray. Generally, so many barnacles and whitish scars appear on older whales that the original slate color is almost obscured. The baleen plates are less than 0.5 meters (20 inches) long, yellowish to white with yellowish-white bristles. There are typically 130 to 180 baleen plates on each side of the mouth. Two to seven shallow grooves furrow the underside of the throat. The gray whale has no dorsal fin, but instead has a dorsal hump followed by 8 to 14 knuckles (small bumps) on the rear portion of the back. The deeply notched flukes are about 3.7 meters (10–12 feet) wide. The distinctive, heart-shaped blow reaches a height of about 3 meters (10 feet).

Migration: Gray whales spend the summer months in the Bering and Chukchi Seas, and then leave for the breeding/calving lagoons along western Baja California, Mexico. They follow the longest migration route of any mammal on Earth, sometimes traveling nearly 16,000 to 22,530 km (10,000-14,000 miles) round trip. The southern migration begins in late September or early October. By December of most years, the first individuals pass along the California coast, with peak numbers passing by in early January. After their stay in the lagoons of Baja California, the whales begin their northward journey, starting in February and usually ending in late March. When migrating, gray whales generally stay within coastal waters. During the winter migration, they stay within 10 km (6 miles) of the shore. Mother’s traveling north with their calves tend to travel even closer to the shore.

Behavior: When traveling, a gray whale generally blows 3 to 5 times in 15 to 30 second intervals. Gray whales often raise their flukes out of the water before diving. Typical dives last 3 to 5 minutes, although a gray whale can stay submerged up to 15 minutes. During migration, gray whales swim at a 3 to 6 miles per hour (4.8–9.6 km/hr) speed. They are seen traveling by themselves, in pairs, or in small, loosely-organized groups. Gray whales are commonly seen breaching (launching out of the water and landing on their side with a splash), spy-hopping (peaking their head above the water for a look around) and lob-tailing/ tail slapping (slapping their flukes on the water with a loud splash).

Reproduction: Gray whales reach sexual maturity at eight or nine years. Mating is mostly confined to Magdalena Bay, San Ignacio Lagoon and Scammon’s Lagoon along the west coast of Baja California, though it often occurs along the southern part of the migration route as well. A female gives birth to a single calf only once in two years, after a 12-13 month gestation period. Most gray whales give birth in the lagoons of Baja California, although some give birth while traveling south along the Southern California coast. Like other cetaceans, the young are born underwater and are able to swim immediately. The calves depend on a diet of rich milk for at least six months. They are weaned at seven to eight months, though young whales may stay with their mothers for an additional year.

Diet: The gray whale is a baleen whale. Instead of teeth, a gray whale has 260 to 360 plates of baleen (made of keratin—the same material as your nails and hair) hanging down from its upper jaw. Gray whales obtain most of their food during the summer months in the Arctic. A small population of gray whales remain a little farther south, and feed off the coasts from Northern California to Kodiak Island, Alaska. The gray whales diet consists mainly of bottom-dwelling amphipods (shrimp-like crustaceans) and other crustaceans such as swarming mysids and pelagic red crabs, along with tube worms, crab larvae and baitfish. To feed, a gray whale typically rolls on its side and suctions in mouthfuls of mud, containing large concentrations of prey, and then strains out the water and mud through their baleen. When in their southern breeding grounds, the whales mostly fast, although they are known to snack along the way.

Conservation Status: Records from the nineteenth century show that as many as 1000 gray whales passed San Diego each day during their southern migration. After uncontrolled hunting by West Coast whalers, the gray whale was almost driven to extinction—in fact, at one time it was believed to be extinct. With complete protection in the eastern Pacific beginning in 1970, this species has made a remarkable recovery to its pre-whaling population size of between 18,000 to 30,000. Due its recovery, the eastern North Pacific gray whale was removed from the endangered species list in June 1994. The western North Pacific population is still listed as “endangered”.

Although Eastern Pacific Gray Whales are not currently endangered or threatened, they are occasionally entangled in both active and lost or abandoned fishing gear. To help gray whales and other ocean animals, Hornblower Cruises sources from sustainable fisheries for its public and private dining cruises, including seafood labeled as “best choices” from the Monterey Bay Aquarium’s Seafood Watch Program. You can help by choosing seafood caught using sustainable methods when dining at home, at a restaurant, or while on vacation.

This educational information was provided to Hornblower Cruises & Events for our guests on the Whale & Dolphin Watching Adventure in partnership with the San Diego Natural History Museum located in Balboa Park of San Diego. (www.sdnhm.org)