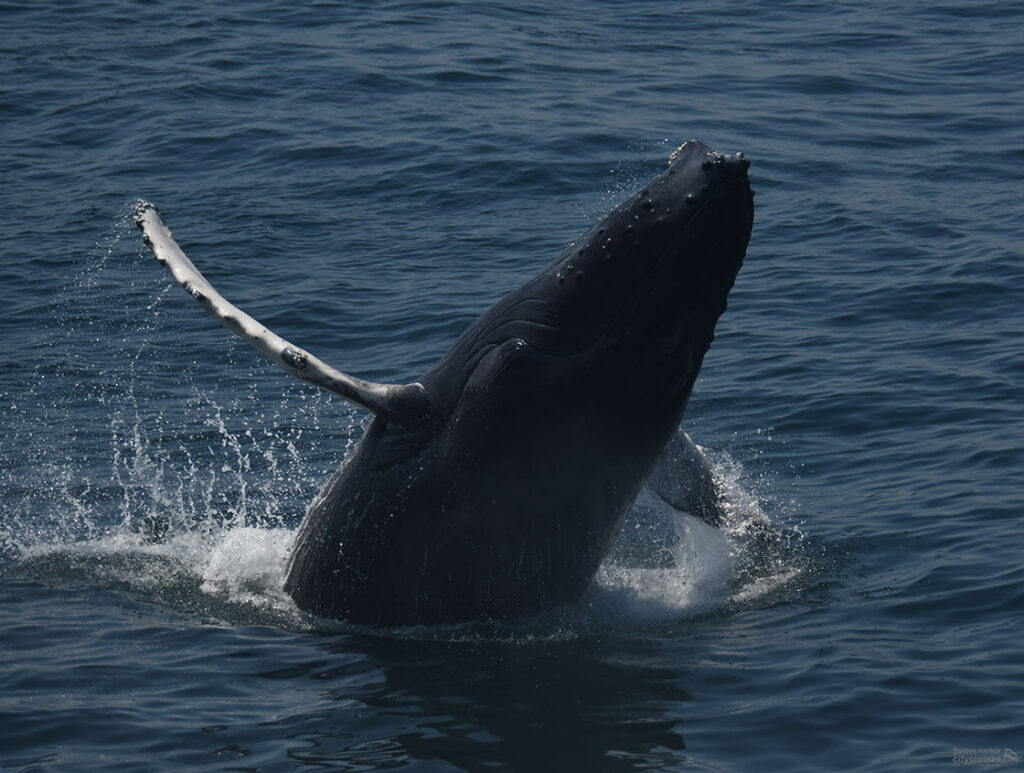 It was another glorious day out on Stellwagen Bank, and much to our delight the Asteria found another hungry group of whales on the northwest corner! We started off with a few fin whales, who were engaging in some lunge feeding activity, and others which were likely resting at the surface. Almost immediately however, we noticed a group of humpback whales engaging in some surface feeding, so we cautiously made our way over.  One particularly curious fin whale decided it would tag along, traveling along our port side! Before we could make it to the feeding group, we were interrupted by a breaching humpback whale calf! This turned out to be Nile’s 22 Calf, and soon we sound ourselves “babysitting” this little one as mom fed just yards ahead. Nile’s calf engaged in more breaching, some rolling, and seemed to find our vessel incredible fascinating. Eventually, Nile made her way over, and she herself began kickfeeding near the boat! Her young one seemed mock her behavior, kicking his own tiny tail. Milkyway also joined the scrum, along with Gar, Cats Paw, and a few other whales that need to be identified. The humpbacks alternated from kickfeeding to blowing bubble nets, but soon found themselves in distinctly separate groups. For some last looks, we enjoyed a circling minke whale, and once again found ourselves among roughly 7-10 lunge feeding fin whales. Reluctantly, we began our journey home, enjoying a beautiful ride back to the city.

Flukes up!
Ashlyn, Colin, and Maddie

The Sanctuary headed to the northwest corner of Stellwagen Bank in search of whale activity. We spotted several blows in the area and found ourselves truly surrounded by the second largest animals on earth, Fin Whales!  They came out of every direction, giving us incredible looks. We also had passing Minke Whales and so many fish bait balls at the surface (see photo), so it makes sense that so many beautiful whales were out and about today. As we trekked north, we kept finding more fin whales before seeing a curious Grey Seal next to us, and even further out still, three Humpback Whales! As we approached the humpbacks, they gave us gorgeous fluking dives, revealing themselves to be Slope, Milkyway and Python! They were slowly cruising at the surface, giving us the opportunity to just sit next to them and watch them close by on this calm sunny Monday. With time running out and a schedule to keep, we said goodbye to our whales and headed back to Boston. A great four species day on the water!

Today was a multispecies day on the Northwest corner of Stellwagen Bank National Marine Sanctuary. We began the day with a fin whale! We got some good looks before this whale turned and headed for the hills. We kept going and came upon a flipper flapping humpback next to the Hurricane. This turned out to be Ridgeline! Her behavior changed to longer dives but we still got some cute views. Satisfied and sunburnt, we returned to Boston.

The noon trip on the Aurora began optimistically given the recent whale sightings this past week. Much to our excitement, we had an excellent start to our day with a fin whale! This whale spent a several minutes traveling just beneath the surface, giving us exceptional looks and time to talk about its unique asymmetrical coloration. After our time with the fin whale, we ventured on in search of some humpback whales. We located a trio of humpbacks that included Ase and Tonic. While we watched the trio, we also noted several minke whales swimming around us! The three whales split during one of their short dives and we continued roaming Stellwagen Bank. We ended the incredible day with two other whales identified as GOM1521 and Etch-a-Sketch.

Today aboard the Sanctuary, the 10am whale watch made its way towards the middle of Stellwagen Bank in search of whales and other marine life.  After a little searching, we spotted a blow from a humpback whale.  This humpback whale turned out to be Clamp!  Clamp was spending a good amount of time at the surface and was not moving very far so we were able to get some really great looks at her.  She even came up close to the boat a few times!  There was another humpback in the area we tried to get looks at but this humpback was taking very long dives, and this whale was being very erratic.  We got some final looks at Clamp who came up right next to the boat and gave us a really beautiful fluking dive before we had to head back to Boston.  It was a really fantastic day out on Stellwagen!

We noticed numerous “bait balls” as we traveled to the Stellwagen Bank National Marine Sanctuary today-schools of fish bubbling near the ocean surface appearing like a spot of falling rain. We refer to these schools of fish as bait because they are often caught and used by fishers to catch larger targets like striped bass and tuna, but they are just a cool natural phenomenon that we get to catch sight of now and then. Upon reaching the western edge of the bank, we found Clamp and watched as she took relatively brief dives compared with the amount of time she spent at the surface. We had some great looks at her before we had to start thinking about turning back for Boston, but she surprised us with a nice close surfacing and dove just a handful of yards from the boat. A gray seal was likely in on the feeding action as it made one brief appearance before diving down back out of sight.

Our captains spotted a small humpback whale on our way in as it worked the edge of another of the bait balls (see photo). We had a good look at the fluke but have yet to match it- perhaps a calf with a fluke pattern that has changed or was not documented in the first place. It’s always fun to see new animals move into the area and I wonder if it will stick around or if it will consider another feeding ground home throughout the season. Only time will tell!

The 1:30 pm whale watch decided to head south, where we found at least 4 humpback whales! We spent most of our trip with Mogul, who was bust bubble feeding. We then spent some time with Shuffleboard, who also was busy bubble feeding, but surprised with a couple lunges at the surface! We got some great looks at these 2, as well as a 3rd humpback who surprised us with a close approach before heading over to the 4th humpback in the area who was a little further away. Overall, a great way to wrap up the day on Stellwagen!

The wildlife sightings began early in our day, with a sweet female mallard duck who was seeking a snack from us. Unfortunately, we only had bread-based items with us, which we didn’t offer in favor of preserving her health and just enjoyed her presence as the M/V Sanctuary pulled into Central Wharf.

After heading to the southwest corner of Stellwagen Bank, we spotted a blow to our south and found a humpback whale taking 8-9 minute dives but staying up for a good bit of time upon resurfacing. A whale that has been said to name itself, with the natural markings spelling out the letters J-O-Y. Joy the humpback whale made a couple of extremely close passes, startling us even! We spotted a few other whales more than a mile from us and cruised back after another successful trip.