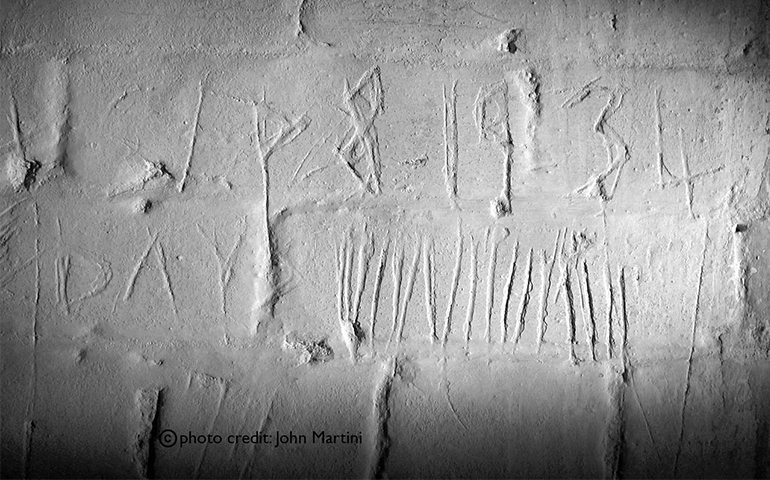 [Guest Blogger John Martini]
One of the most persistent rumors about Alcatraz Island is that ancient “Spanish Dungeons” are dug into the rock beneath the prison. Like much of Alcatraz’s history there is a grain of truth to these stories, but the reality is clouded by mythology. Short answer: Yes, dungeons do exist beneath the prison building. No, the Spanish didn’t build them.
Here’s the full story: The present prison building on Alcatraz was previously the site of a massive brick barracks built by the U.S. Army in the 1850s. Called “The Citadel,” army prisoners demolished it in 1908 to make way for a new military prison.
During construction, the army decided to incorporate the Citadel’s basement rooms into the new cellhouse for belowground solitary confinement. When the new prison opened in 1912, these underground cells quickly gained a grim notoriety among the military convicts. Conditions there were indeed dismal; men were kept in near total darkness, frequently fed bread and water, and chained in standing positions for much of the day. They had only blankets to sleep on, and sanitation was a bucket in the corner. The usual duration of confinement was 14 days.
The army guards referred to these underground cells as dungeons, and because the walls were built of seemingly ancient brick, convicts soon began referring to them ominously as Spanish Dungeons. The cons didn’t realize the brick vaults were actually Gold Rush-era Yankee construction, though, and their guards were in no hurry to educate them.

In 1934 the army handed over Alcatraz to the civilian Bureau of Prisons (BOP) as a federal penitentiary. The BOP continued to use the dungeons for several more years, but adopted the less dramatic terms “Lower Solitary” and “Basement Solitary” for the underground cells. However, the army policies of darkness, chaining during the day, and the use of slop buckets continued. One major difference, though, was the maximum length of stay. Under the BOP it was extended from 14 to 19 days.
Records reveal that the Lower Solitary cells actually saw little use during the penitentiary era, and that between 1934 and 1938 only 26 men were confined there. Among the federal convicts, however, the old name Spanish Dungeons continued to be passed around in whispered terms.

The dungeons were eventually phased out and replaced by the present D-Block isolation wing. In the Citadel, the front walls and barred doors of the dungeon cells were ripped out sometime around 1939, obliterating most traces of their penal use. Visitors to the Citadel today can still see the vaulted recesses that held the dark cells and, with the aid of a flashlight, discern the convict names and registration numbers still carved into the brick walls.