Take a Walk and Explore the Sights of Magical Barcelona

When you arrive in Barcelona, you’ll want to walk this exciting city that just happens to be the capital of Catalonia. As you take to the city on foot, you’ll hear people speaking the two main languages of Barcelona: Spanish and Catalan, the second of which is very similar and comes from the same roots.

Not only will you hear the languages, you’ll enjoy the perfect temperate Mediterranean climate, which is just right for walking and checking out all this architectural and culture-rich city has to offer.

From neighborhood festivals to dreamy, sandy beaches just about everywhere you turn, you’ll find something that delights the senses, including the desirable smells of the local fare.

If you’re lucky enough to be in Barcelona on April 6 for National Walking Day, there’s even more reasons to put that first foot forward in this tempting and walkable city. 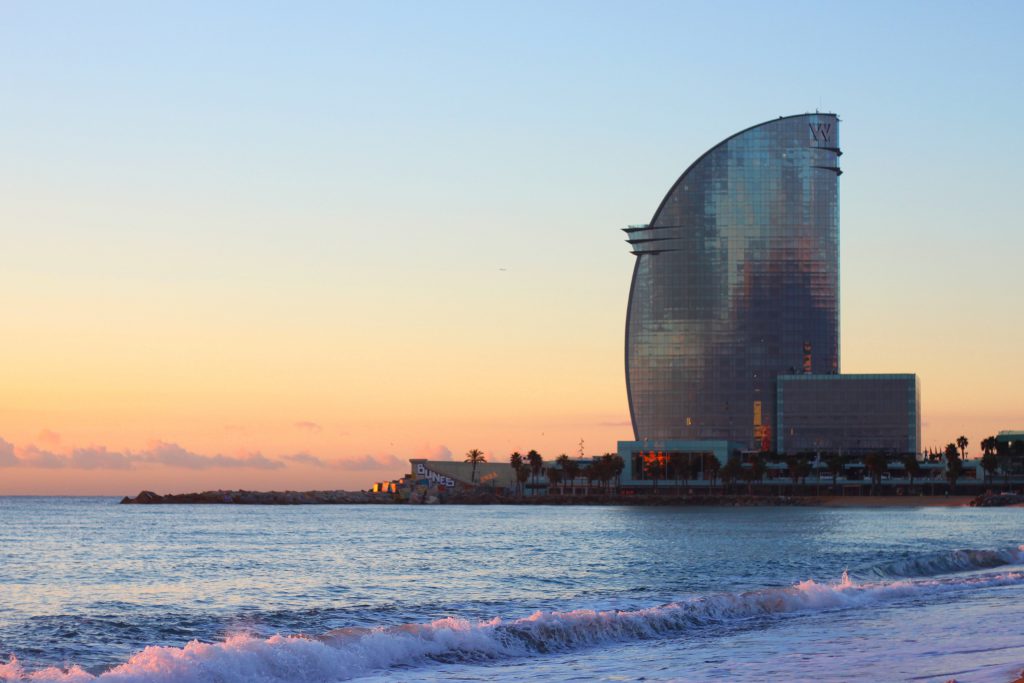 Take a Walk on the Beach

Because most everyone loves a good beach and that feeling of warm sand between the toes, Barcelona’s long boardwalk makes for the perfect walk. Start from the city’s Barceloneta neighborhood, a former fishing quarter on the Mediterranean, and walk to Llevant Beach near Poblenou neighborhood.

These days Poblenou is easily considered the city’s hottest spot, filled with artist studios, independent book shops, and music venues. While you’re walking this great stretch overlooking the Mediterranean, iconic buildings and public art installations will catch your eye and draw you in. Having a good time is basically expected in this part of town so there’s nothing to do but enjoy it all. 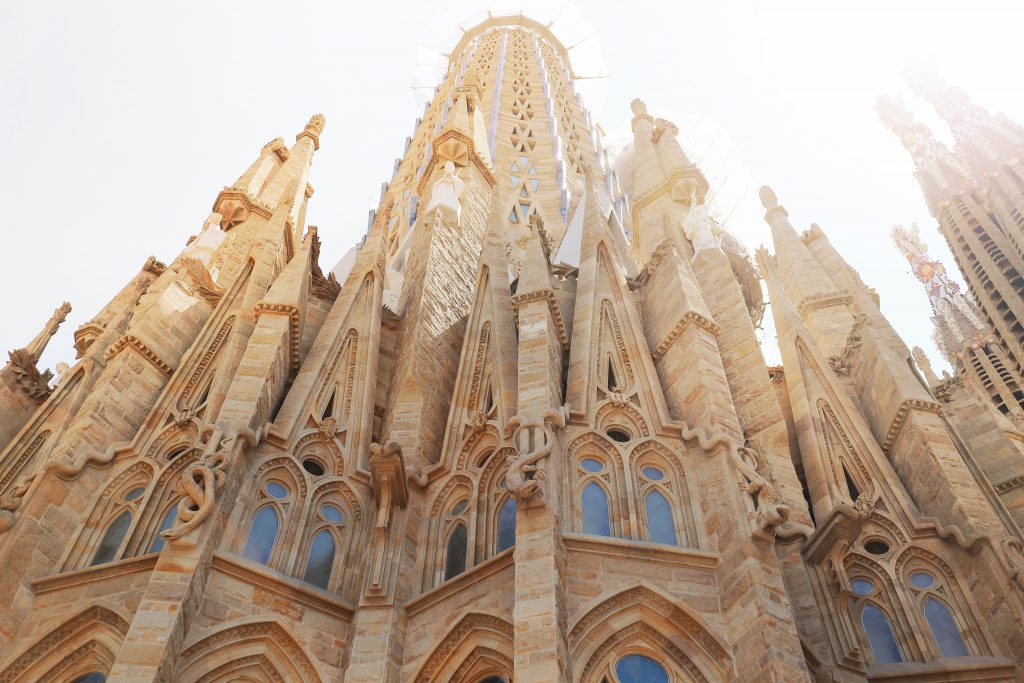 When in Spain, Get Gaudi

Spanish architect Antoni Gaudi’s work was not only original but intensely individual. Considered the father of Catalan Modernism, Gaudi’s work cannot be missed in Barcelona, if only because it is just about everywhere you turn, so you’ll get to enjoy so much of it.

A walk between Gaudi’s buildings is the perfect way to see the influences that this architect’s works have on the city. You’ll easily find the most important of his buildings in the center of Barcelona. There’s so much ground to cover and a lot of great photos to collect. 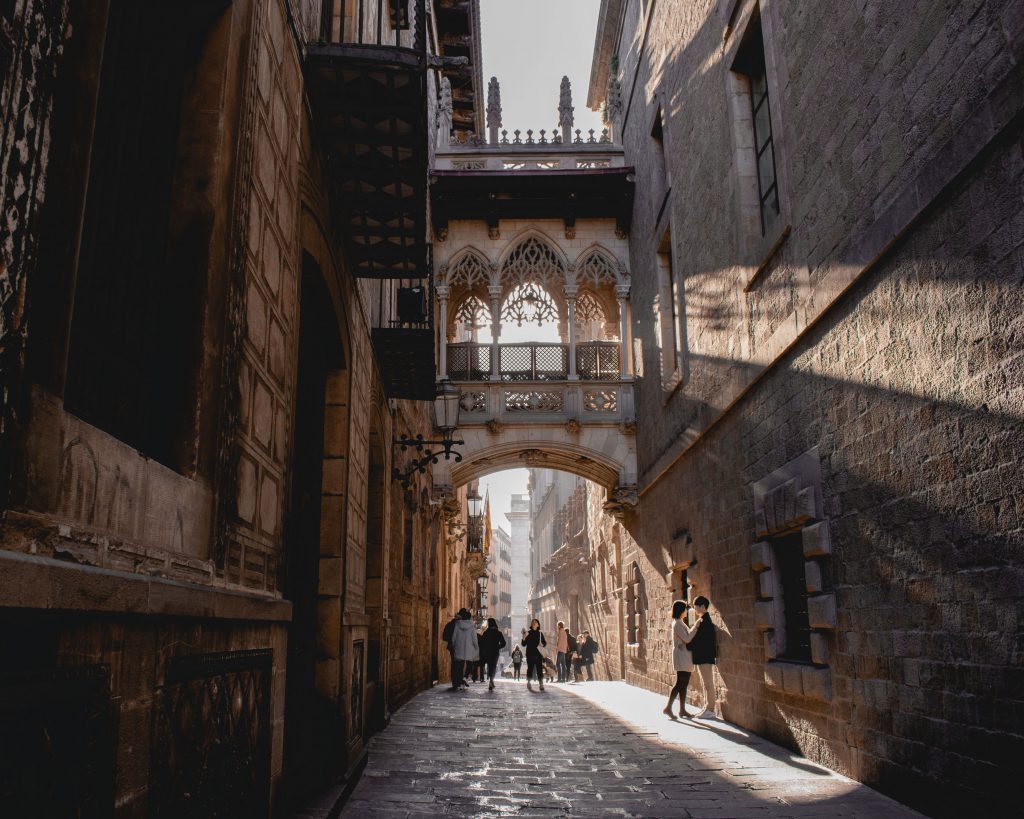 You’ll appreciate walking this part of the city, which was once a Roman village and features parts of its magnificent history.

This part of the city is fun to walk because the past and present are evident given the area’s modernization mixed in with ancient buildings along the way. Keep a close watch on everything you discover as you’ll walk winding, narrow streets making it easy to miss some of the area’s hidden highlights.

Take in and relax in the quarter’s placas – or peaceful squares — and then head on over to the large Cathedral that sits in the heart of the district. There’s a courtyard filled with beautiful plants and you’ll even see some geese hanging out, making for a great photo op. 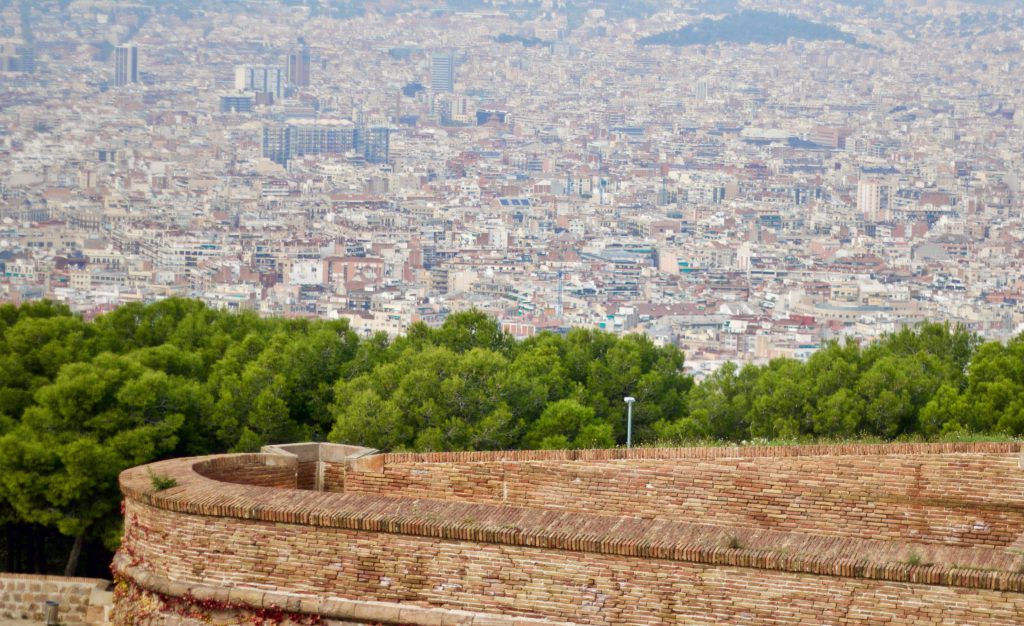 Take in a Local Castle

For those who love the lure of a historic castle, a walk to the summit of Montjuic Castle is the perfect stroll on any day. The castle stands at the edge of Barcelona on top of Montjuic hill, so be prepared for a more difficult walk, but one that’s worth the strides. While history can trace human settlements on Montjuic to 1073, it became a military function in the 17th century.

It’s another perfect spot for National Walking Day as you can start at the bottom of the hill and head on up for a nice, long walk. When you arrive, the castle awaits you for a scenic tour and grand views of the port. There’s also a military museum for visitors. Or watch the sunset and maybe sprawl out for a picnic when you’re ready to rest and indulge in something to eat. 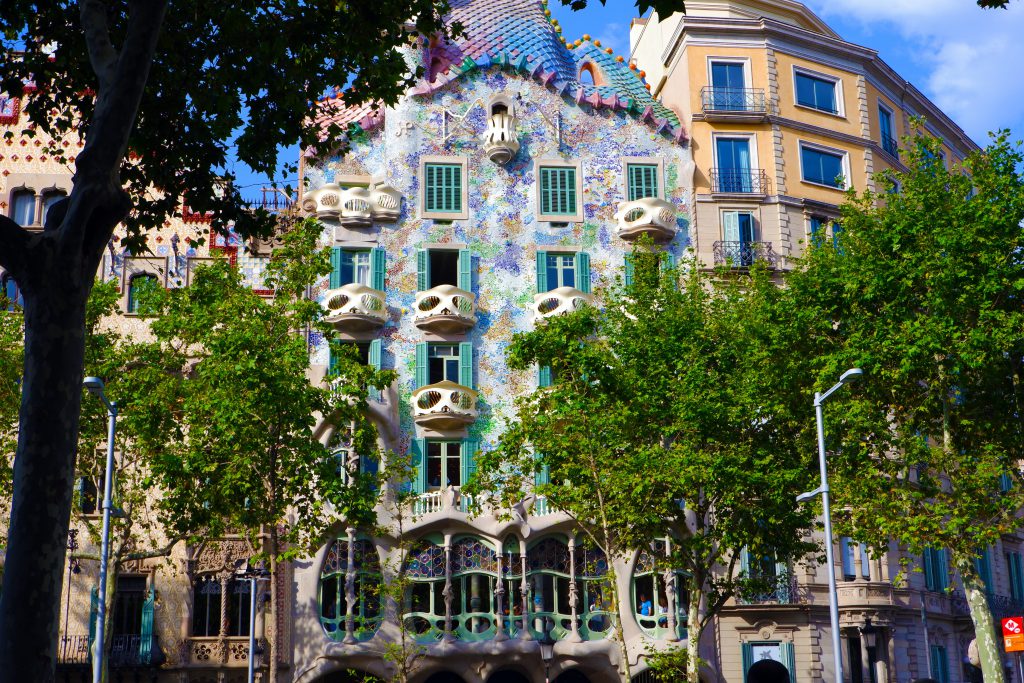 Walk Until You Can Shop

Every great European city has an even greater shopping district. And Barcelona does not disappoint.

Take that retail stroll down Passeig de Gràcia, just 1.3 km long and filled with some of the finest clothing and retail stores you’ll find around the world. You’ll start this walkable shopper’s treat at Plaça Catalunya and take it through the Carrer Gran de Gràcia.

Spoiler alert! Speaking of Gaudi, you’ll get to view his Casa Batlló, which is perfectly located on the strip. In a bit of history, Gaudi was originally given the freedom to demolish the building by Josep Batlló but chose instead to change it up. Many call the refurbished project a work of art. 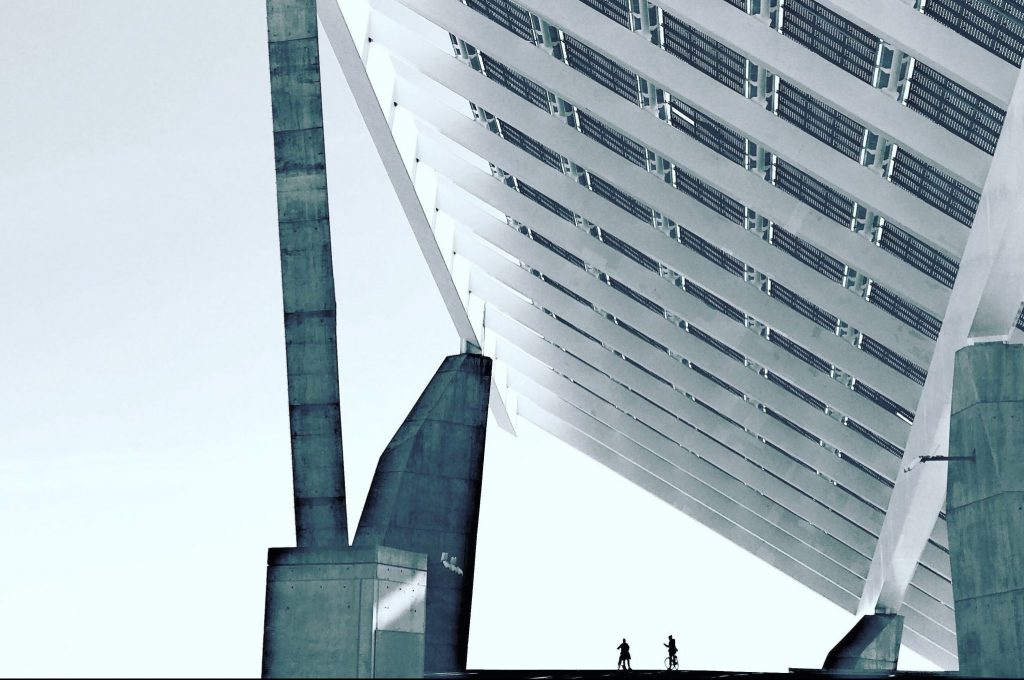 A Different Side of Barcelona

If you want to head on over and walk an area that’s not typical, explore Parc Fòrum and the Besòs river. It’s been known as Barcelona’s industrial heart. It’s truly a mix of abandoned factories, newer architecture, and even some warehouses that have been converted. As you head over further from the city, you’ll reach the diverse vegetation and environment of Besòs River. 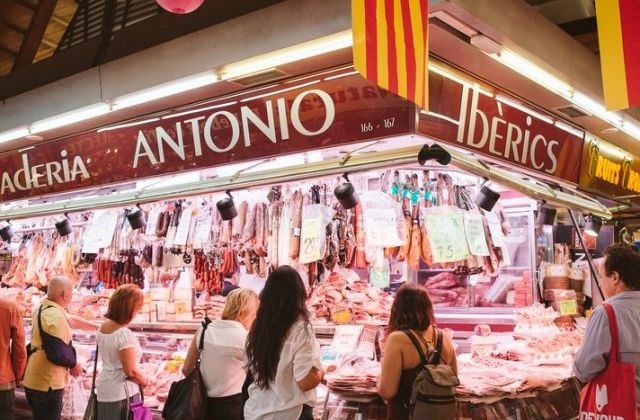 From tapas and high-end restaurants to wine bars throughout many of Barcelona’s neighborhoods, you’ll find some amazing restaurants to excite your taste buds along the way. Map out some of this great city’s areas you want to visit and include a local restaurant to match. It’s such a great way to see the city and discover delectable eats. 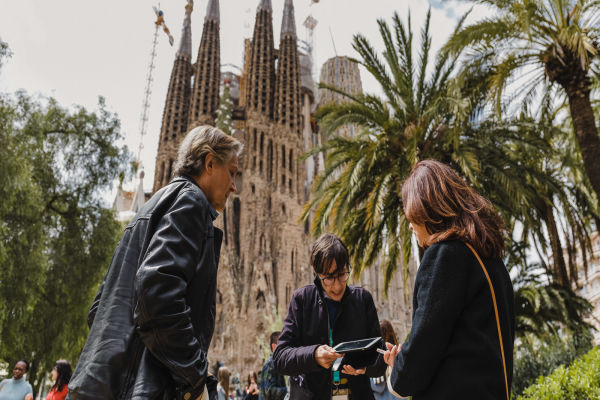 Some Top Walking Tours of Barcelona

If you want to take on some of the best walking tours in Barcelona, check out the Complete Gaudi Tour, a comprehensive tour but without the crowds.

The Express Sagrada Familiar Tour is an express tour featuring a guide with all the expertise to dive into the heart of Catalonian art and architecture.