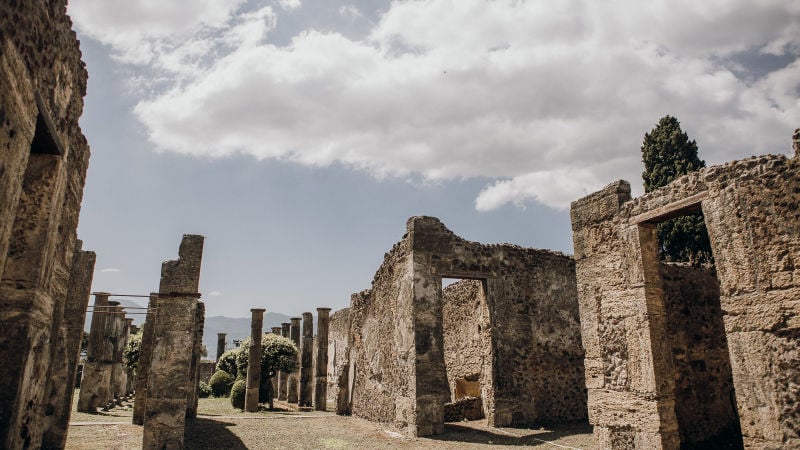 A tour to Pompeii, Italy is a great way to learn about Roman history and see some of the most well-preserved ancient ruins in the world. Even if you’re not a history buff, the experience of walking through an entire city that was frozen in time by a volcanic eruption is truly unforgettable. 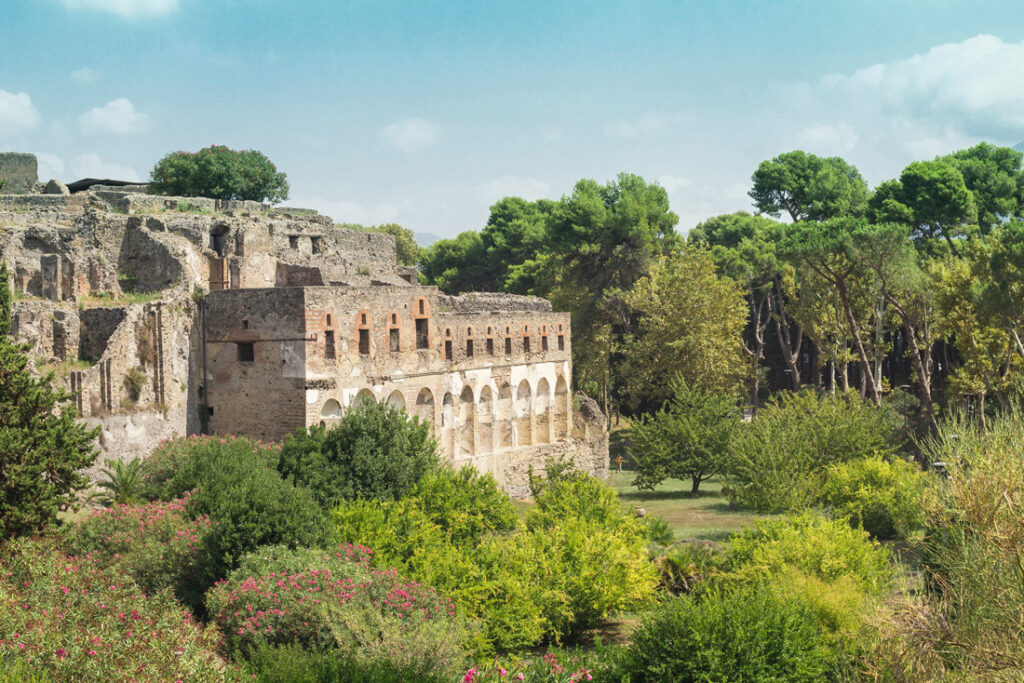 A Quick History of Pompeii

Nearly two-thousand years ago, on August 24th in the year 79 AD, Mount Vesuvius erupted and covered the city of Pompeii, Italy with nine feet of ash and volcanic debris. Because the city was covered so quickly, much of the ancient city was preserved. Pompeii was not discovered until centuries later and was not excavated until the mid-18th century. At the time of excavation, archeologists found buildings dating back to the 4th century B.C., remains of century old people, and even bakeries with loaves of bread still in the oven. Pompeii is still one of the most well-preserved pieces of history.

Getting to the Pompeii Archeological Park: The train from Naples, Italy will bring visitors right to the entrance of the park. While there are three entrances, the main entrance is the Porta Marina. This entry is where the Naples train drops visitors off and is where guests can find the ticket desk.

Opening Hours: Tuesday through Sunday, 9am to 7pm with the last entry at 5:30pm

What to Visit in Pompeii 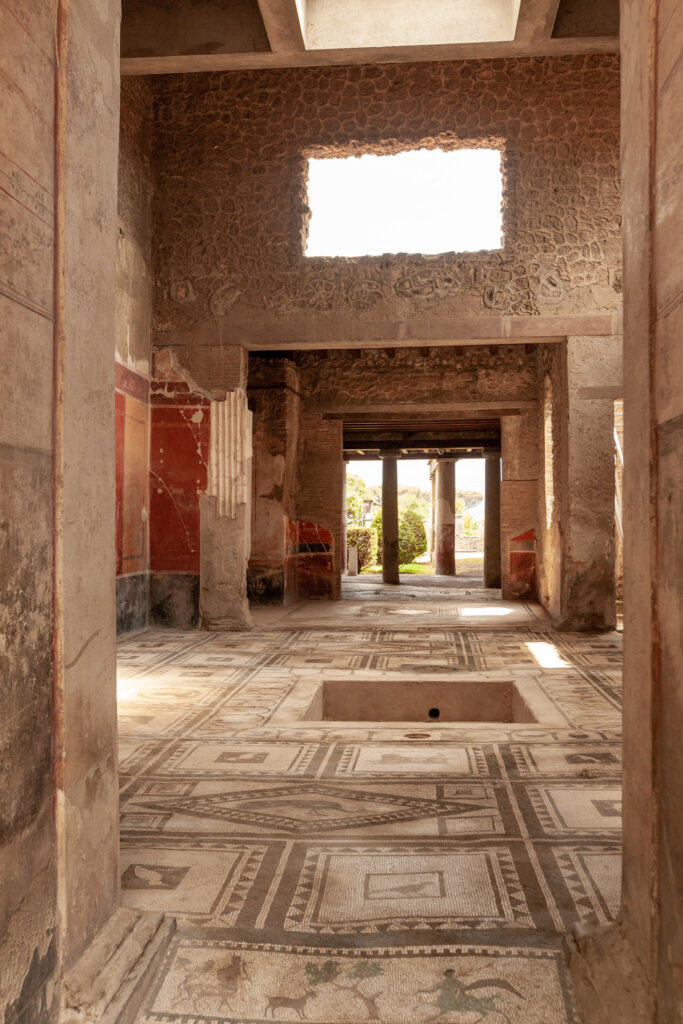 One of the most fascinating artifacts to come out of Pompeii is the plaster death casts that are found at the Antiquarium. These casts were created by pouring plaster into molds that were left behind in the solidified ash once the bodies decomposed. The Antiquarium also houses many other artifacts found at the site, including some that date back to before the Roman era.

The Roman Forum is the heart of Pompeii’s ancient city life. It is in this area that the townspeople would gather for meetings, and where markets would be set up daily. From the Forum, visitors can also see the Sanctuary of Apollo and the Temple of Jupiter.

The Stabian Baths are very well-preserved baths that have both a male and female pools and stoves to heat up water. The facility also includes a changing room, a cold bath, warm bath, and hot bath that used to be heated by air-ducts. Many gladiators would train at the gym that is attached to the facility as well.

An amphitheater that was built sometime around 80 B.C. is at the far end of Pompeii. The massive theatre could seat around 12,000 people. This is where gladiators would compete in battle.

What is the Best Pompeii Tour by City Experiences?

The Best of Pompeii Tour: Unveiling the Buried City is a great tour that will take visitors all over the Pompeii site. The tour is guided by an expert archeologist that will tell the small group of no more than fifteen all about the history and architecture. The Pompeii Tour takes you to all the major sites in Pompeii plus other attractions like the Porta Marina, Pompeii’s Main Street, ancient streets, and brothels. Visitors will view and learn about the theatres, roman houses, the baths, and the plaster death casts.

How Long Does It Take to Tour Pompeii?

Pompeii can easily be toured in a few hours. To have the best experience, join the City Experiences Pompeii Tour to learn about the tragic history and see for yourself the world over two thousand years ago. 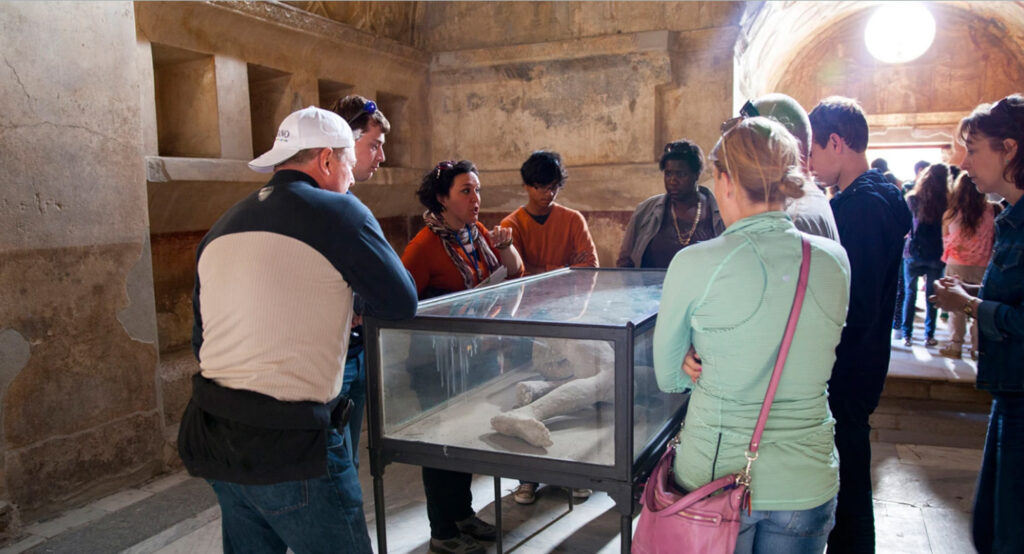 Share Article
Twitter Facebook
Previous Story Celebrate the Oceans by Honoring World Oceans Day
Next Story Taking A Boat Trip In York Is The #1 Thing To Do This Summer!