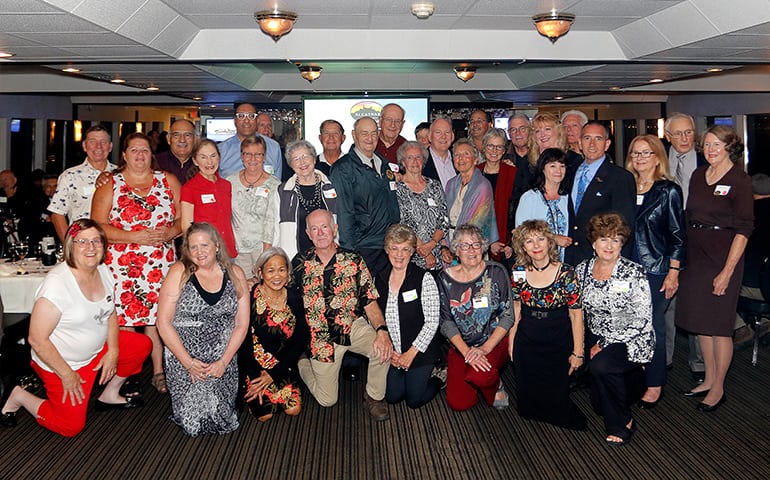 Guest Blog Post – Steve Mahoneyplace holder
A final, special event took place on Alcatraz Island on August 12, 2018. This was the last reunion gathering of the Alcatraz Alumni Association. The tradition was started before the prison closed and continued both on and off the Island up until now. There were a few years after the prison closed where “gatherings” were more local because many of the guards went to other prisons across the nation. Former prisoners only joined events in recent decades when this more recently became a possibility.
Alumni Weekend was initially more for actual Alcatraz alumni to have a reunion to rekindle friendships and share memories from our time on the Island. Decades ago, the National Park Service started having alumni speak to the public, sharing stories of their lives on The Rock. For a long time, the reunion has been held on the second Sunday in August and has gone from a simple affair where alumni brought food as well as sleeping bags for those who would spend the night on Alcatraz to a larger event with support from many groups like the National Park Service, Golden Gate Parks Conservancy, the Alumni and others with interest in Alcatraz and its history.
This year was the last time alumni’s “Fading Voices,” with the guards and family members shared their living history memories. The stories have always been rich and made stronger when told on Alcatraz Island. This event, the final one of its kind was a tough one for many as the number of living guards, former inmates and family members who lived on the Island fade more and more each year.
Those fortunate enough to have attended this year witnessed something special as we alumni shared our thoughts and memories from this special place, Alcatraz, The Rock, the prison and the place we once called home.