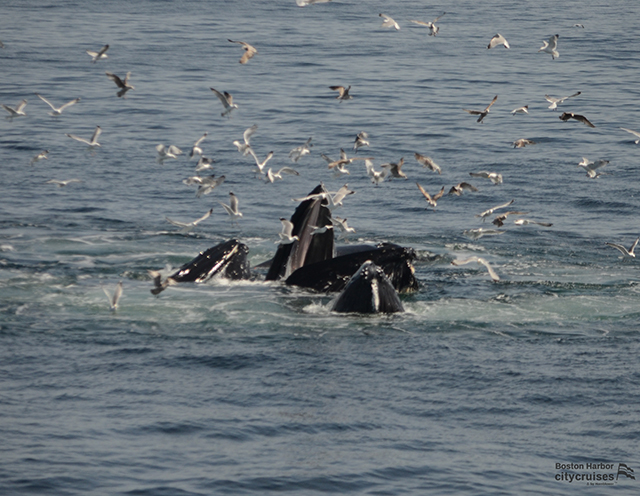 Please find the Naturalist Notes for the weekend of 4/22/22 to 4/25/22 from the onboard team of naturalists for our New England Whale Watching tour in partnership with the New England Aquarium.

The 10:00 whale watch headed out on the Sanctuary in search of marine wildlife. Before reaching the bank, we saw numerous blows from fin whales and right whales, and slowed down to give these animals plenty of space. We cautiously proceeded towards the Sanctuary and were met by a flurry of activity! No matter where we looked, there seemed to be a blow from a large whale or a splash from a diving bird.  We saw at least ten humpbacks, eight fin whales, five minke whales, a sei whale, and a small pod of Atlantic sided dolphins. Highlights of our trip included spending time with a group of three humpbacks: Xylem, Landslide, and Highball. We got to witness some lunging fin whales that were surrounded by swarming gulls and diving gannets. We also had some very charismatic grey seals and minkes whales during our trip, giving passengers on all sides awesome looks!

It was truly a multi-species day! The 10am whale watch headed out on the Asteria in search of wildlife. Shortly after we made our way out of the harbor, we spotted a North Atlantic Right Whale. We were very careful to give this animal plenty of space and once we were quite a distance away, we continued onward. It did not take long before we found ourselves in the company of some Atlantic White-Sided Dolphins. This curious pod swam around both sides of the boat, starting our trip off on a promising note. We pressed on, finally ending up on Stellwagen Bank. Shortly after arriving, we found ourselves thrown into some thick “whale soup.” We were surrounded by Humpback Whales, Minke Whales, Fin Whales, and even a couple of Sei Whales. We even got both Harbor and Gray seals in the mix! It was very encouraging to see all these different species so close to one another, all feeding on the same schooling fish. As some of the whales started to spread out, it was the endless sea of humpbacks who we spent the most time with. There were at least 14 humpbacks feeding all around us, including Reaper, Pinpoint, Dome, Mural, Falcon, Putter, Palette, Lollipop, Underline and Monarch, among others still to be identified. Some of the whales were bubble-net feeding while still others were kick feeding. There was not a single spot on that was lacking whales. The highlight of the trip was certainly the large group of five that surfaced through a bubble cloud right next to our boat, mouths still open. We happily sat and watched these whales feed all around us until it was time to head back to Boston. A beautiful day full of whales and wildlife. What a remarkable day on the water!

What a fantastic and absolutely amazing afternoon! The 2:30pm whale watched headed out the Asteria towards Stellwagen Bank. After a great morning, we were eager to get back on the water! Shortly after leaving the harbor, we spotted a small pod of Atlantic-White Sided-Dolphins and blows from a few fin whales and a potential right whale. Keeping our distance, we made our way towards the bank, and were quickly rewarded with an abundance of surface activity. Everywhere we looked – we got to see a humpback throwing some body-part out of the water: lobtails, flipper slaps, and even breaches! We predominately spent our time with one very active flipper slapping humpback – who breached numerous times right off our bow!

Many of the humpbacks in the area seemed to spend more time above the water than in it, often trading lobtails or flipper slaps on either side of the boat.

In between all of this surface activity, we were also surrounded by a huge pod of Atlantic- white sided dolphin, 15-20 grey seals, and some minkes! The grey seals have consistently been fan favorites this season, as they always charismatically surface right next to our vessel.

Besides the fantastic humpbacks, we also got some of the best looks at sei whales I have ever seen. These mysterious whales were skim feeding right next to our vessel – and we were close enough to see their baleen as they fed.

After a very busy morning trip filled with feeding whales, it was really cool to see such a different variety of behaviors! Surrounded by whales and blows from all sides, we truly found ourself in some very active whale soup this afternoon!

What a fantastic day,

We had an absolutely spectacular day onboard the Asteria for the 10am whale watch! Our sightings started early with a blow around the LNG buoy. While documenting this whale, we took a look around and noticed hundreds of birds up at the surface, before looking down and noticing several skim feeding sei whales! We spent some time with one individual who spent ample time at the surface, and allowed us some incredible views at this rare species. A minke whale darted around the area, likely enjoying the buffet beneath the surface as well. After some time, we continued north, where we met up with more skim feeding sei whales, and a lunge feeding fin whale! Getting looks at fin whales feeding is always super impressive, and this one remained at the surface the entire time we were with it, lunging every which way. During this time, we looked down into the water and noticed several patches of red, and realized that these whales were feeding on krill! Krill are highly unusual prey source for this area, but we know that they provide ample nutrients for these whales, and they were sure taking advantage of that! In this area were also two humpback whales, Grommet and Wish who were blowing bubble clouds and displaying some spectacular lunges themselves. We watched this pair engage in this feeding behavior for quite a while, until a third humpback joined the fray, a female named Nine! Though they never quite became a trio, they continued to feed on the abundance of prey while we took in the sights. We decided to take a little ride, where we met up with a small nursery pod of Atlantic white sided dolphins, and another humpback, before making the quick (just 15 miles!) journey back to Boston. It truly was a wonderful day to enjoy the wonders of the ocean.

Flukes up & baleen out!