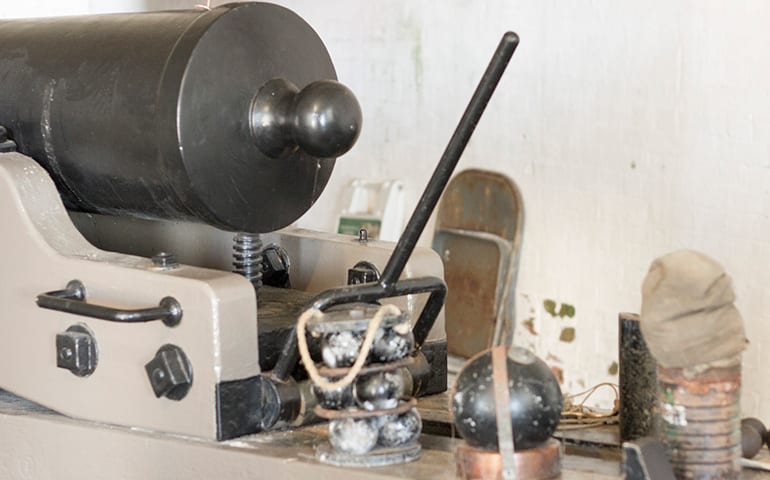 The Friends of Civil War Alcatraz (FOCWA) is a non-profit group that supports the interpretation of Civil War history on Alcatraz Island. In partnership with the National Park Service, the Parks Conservancy and Alcatraz Cruises, the group recently held a Living History Day on Alcatraz with reenactments from Union Army infantry, artillery and musicians as well as 1860’s civilians.

Visitors to Alcatraz Island were entertained with popular tunes of the period by the 3rd Artillery Band, which was actually stationed on Alcatraz in the 1860’s. Additionally, visitors were given a tour of Fort Alcatraz by Gary Hormel who portrayed Captain Joseph Stewart, the first commander of the fort in 1859.
Also giving tours of the old citadel was FOCWA member Constance Smith who provided a woman’s perspective of life on the island as a military wife. In the cannon room, a group of artillery re-enactors showed visitors how the howitzer cannon was prepared, loaded and fired. Another re-enactor, Michelle Hall, gave a moving talk in the Sally Port East Room as Harriet Beecher Stowe, the author of Uncle Tom’s Cabin, a book that stirred up great passions on both sides prior to the Civil War.

While most visitors were expecting to hear about the federal penitentiary story, they were surprised and pleased to learn about another aspect of the history of Alcatraz and its importance as the Guardian of the Bay during the Civil War.
Each year, the National Park Service and the Friends of Civil War Alcatraz host this Living History Day, depicting life on Alcatraz Island during the Civil War, when it was a military fort. The story of the Post on Alcatraces Island, as it was officially known, is largely untold. During Living History Day, visitors have an opportunity to hear live Civil War era music, hear about California’s role in the Civil War, see military and civilian period attire worn by expert interpreters and take a guided tour of Fort Alcatraz. For more information about the role of Alcatraz during the Civil War and to learn about the next reenactment, please visit www.friendsofcivilwaralcatraz.org.

Preparing for 2019 (date TBD):
Activities on the island will begin with the arrival of the first boat on the island and continue throughout the day until 4pm. All activities are free and are designed to give the visitor a sense of what life was like on Alcatraz when it was an important seacoast defensive fort during the American Civil War. The activities will include:
1) Music of the Civil War period played by the 3rd U.S. Artillery Band
2) Periodic tours of Fort Alcatraz, showing the remnants of the fort, its history and its role in California’s contribution to the Union cause
3) Military drills, as would have been done by Union troops on the island
4) Union recruitment and what it was like to enlist in the Union Army
5) Prisoners under guard – see how Alcatraz soon became a prison not only for disorderly soldiers but also for Confederate sympathizers
6) Women’s roles as they applied their skills in sewing, weaving, medicine, laundry and cooking to support the Union troops