Niagara Falls, a Love Story: The History of the Honeymoon Capital of the World

Niagara Blog » Niagara Falls, a Love Story: The History of the Honeymoon Capital of the World 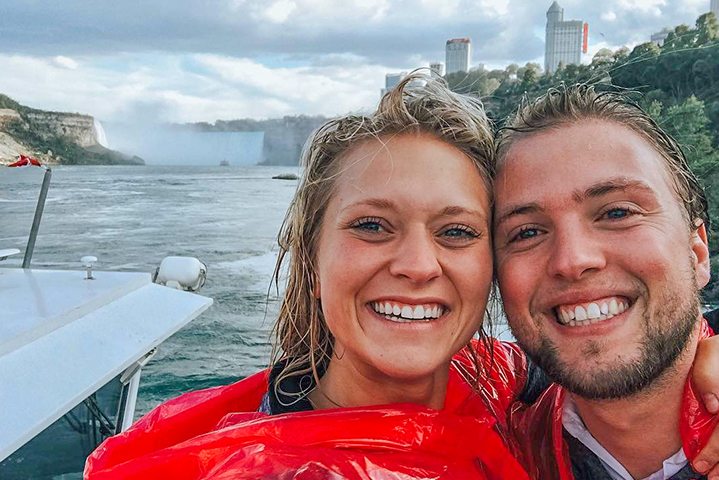 Ah, the romance of Niagara Falls. There are plenty of modern reasons Niagara Falls is considered the honeymoon capital, including a bevy of great restaurants, gorgeous views, and our very own romantic Falls Illumination Cruise. But did you know the natural wonder has attracted newlyweds for over 215 years?
That’s right – Niagara Falls has been a honeymoon destination longer than Canada has been a country. Here’s how it all got started (and why it never stopped).

A Brief History of Honeymooning

If you got married before the 1800s, honeymooning wouldn’t even cross your mind. Not only was travelling for pleasure unusual in those days, we have no written evidence that a deliberate vacation following a marriage – a “honeymoon” – was even mentioned prior to the early 19th century.
Like many English words, the word “honeymoon” evolved over time. It is first seen in the 14th century as a term describing the “sweet” beginnings of marriage. But since tourism wasn’t a hopping industry in the 14th century, we have to wait until 1804 to find the first piece of popular writing using “honeymoon” to describe a post-wedding trip.
Here’s that 1804 passage from a Maria Edgeworth story (you can read the full text here).

The term “honeymoon” increased in usage after that – slowly at first, then more quickly as leisure travel and romance in marriage became more and more popular.  This chart traces the rise of the word “honeymoon” over time in English language texts. The word has had quite a journey to become the popular term we know today!

Here’s Where the History Gets Really Interesting for Niagara Falls.

This famous couple was reportedly followed by another famous honeymooner, Napoleon Bonaparte’s brother Jerome. This trip has gone down in popular legend thanks in part to the perilousness of the journey – Jerome and his bride reportedly travelled to Utica, New York all the way from New Orleans by stagecoach, then took to horseback and camped their way to Niagara Falls. To read a full account of Bonaparte’s journey and marriage written by Sherman Zavitz, official historian for the city of Niagara Falls, click here.

How to Plan a Niagara Falls Honeymoon in the 1800s

It’s pretty easy for couples to plan a trip to Niagara Falls today. Plentiful flights, hotel bookings, and tickets to famous Niagara Falls attractions are just a click away.
But as the stories of Theodosia  Burr and Jerome Bonaparte show us, it wasn’t always this easy. Here are a few things you would have to consider when planning a 19th century honeymoon to Niagara Falls.
Transportation. After the Erie Canal was completed in the 1820s, tourists were able to travel on the “northern tour” to reach the popular honeymoon destination. A few decades later, the development of railroads in New York and Southern Canada allowed even more convenient travel between popular destinations, including Niagara Falls. While this was still a much longer journey than the modern flight, it was far faster (and more comfortable!) than a week-long trek on horseback.
Accomodations. In some ways, Niagara Falls was prepared to welcome the bevy of tourists that began coming through after the opening of the Erie Canal. The first inns in Chippawa were built as early as 1796 to accommodate visitors who came through town for commercial and defence reasons. Later, tourism in the area set off a flurry of development closer to Niagara Falls herself, giving early honeymooners a variety of options when they landed in the area.
Entertainment. If you took a Hornblower Niagara Falls Boat Tour <inbound link?> on a recent getaway, you’re in good company – tourists have been using sightseeing boats to observe the natural wonder since 1848! Sightseeing was the main attraction for tourists, and honeymooners often told friends and family back home of enjoyable days walking through the landscape and admiring the majesty and natural beauty of Niagara Falls. Stunters also came to entertain guests from time to time, with the first arriving in 1829.

The Honeymoon Capital of the World Takes the Silver Screen

The 20th century brought a shift to Niagara Falls – more tourists, more attractions, and more hype. As photography and videography technology developed, many of those who had only dreamed of Niagara Falls were able to admire it even from afar.
Perhaps the most famous example of this is the Marilyn Monroe film Niagara. The movie features – you guessed it – two honeymooners in Niagara Falls. The story capitalized on the romance of this location, and the city was abuzz as it was filmed over two weeks in June of 1953.
Since then, Niagara Falls has been the setting of a number of on-screen romances. Lois Lane and Clark Kent are seen at the Falls in Superman II, while Jim and Pam famously said “I do” on a Niagara Falls boat tour in a 2009 episode of The Office. All the while, couples from all over the world have continued to flock to Niagara Falls for a romantic honeymoon. Clearly, the romantic reputation of Niagara Falls is still going strong!

Niagara Falls holds a special place in the hearts of couples around the world. From scenic proposals to destination weddings and memorable honeymoons, the Falls have been the backdrop to many, many love stories.
Niagara Falls boat tours have been a long-time staple for visitors to Niagara Falls, which means we’re lucky enough to have many of these happy couples on board our boat year after year. Here are just a few of the recent images our visitors have shared with us from their romantic Niagara Falls experience!

Modern couples may not have spent weeks on horseback to arrive at their destination like our early honeymooners, but they were just as awe-inspired by the majesty of the Falls. Luckily, some things never change!

Planning a couple’s getaway to the Falls this spring or summer? Book your tickets to one of these great Hornblower experiences today!