Skip to content
Uncategorized / For the Love of Soccer

For the Love of Soccer

Uncategorized » For the Love of Soccer

We are throwing our hands up in the A-I-R! There were many fist pumps, laughs, and even a mini soccer match (who knew) on board this weekend for our St. Catharines Jet U13 Girls Regional Travel Soccer team who made a visit to Hornblower Niagara Cruises, in Niagara Falls, Canada this Sunday. The girls didn’t just arrive in their Canadian red inspired jerseys (sound familiar), but also with two great big trophies that showed off their recent win for the entire league and in the U13 girls Division A championships.

Just like a TSN recap, the girls played their final championship game on Saturday, September 13, 2014 against the Niagara Falls Titans sponsored by Stradawest Eat and Siphouse. Despite the unusually frigid Fall temperatures and torrential rain, the girls played their best defeating the team with a final score of 2 to 0.  With much sweat, tears and definitely muddy knee caps the girls managed game by game to make it to the finals in the league.  The team who travels across the Niagara Region played a total of 17 teams and with their perseverance and  teamwork throughout the season the girls landed as number one in the league and region.

They say its best to replenish with water after playing an intense game or workout and luckily for the girls, parents and coaches, we hade just the thing for them. The girls anxiously waited before boarding the boats with a series of candid and professionals pictures taken from the Marketing department and just as excited parents.  Once on board the girls, scattered themselves on the upper and lower deck to get the best view of the mighty Falls. As the boat approached closer to the Falls, the screams increased in volume with a terrifying and excited pitch. As the girls had fun being girls, the parents enjoyed it just as much standing on the 360-degree viewing platform watching over their children and experiencing the magic of the Falls.  Once the experience concluded, the girls continues with their smiles and drenched soccer jerseys in front of the Hornblower Niagara Cruises Step and Repeat. The day also featured the team presenting the Marketing department with a beautiful sports watch and professional portraits of the team.

With the season concluded, many of the girls will continue ti play the sport for the love of the game indoors during the winter months, but will resume again in early Spring for practices and games.

Thank you again to all the players for an amazing year and a job well done and to the many inspirational parents who show their support for their daughters.

See the team in action from their game this weekend and visit to Hornblower Niagara Cruises:

See the team within the community 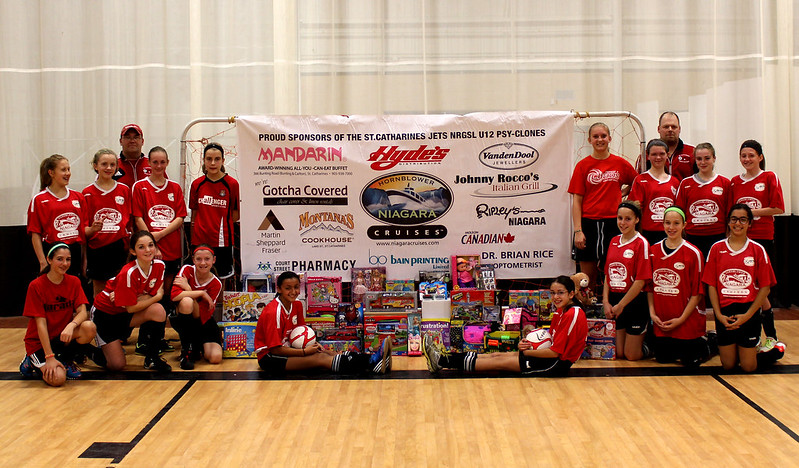