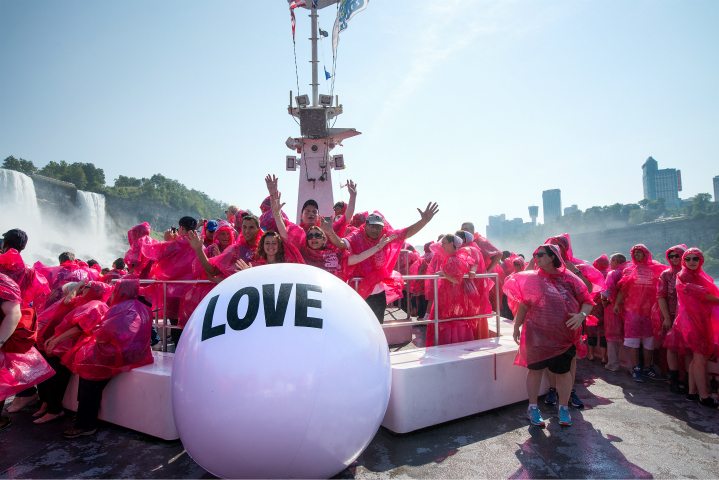 This year was a big year for love and in return we want to show our visitors how much we love them! Starting Monday, September 7th, 2015 look for the 5 foot big white love ball making its first ever debut at Hornblower Niagara Cruises in Niagara Falls, Canada. The ball will kick off in the Canadian city on the east coast and make its way to the big apple at Hornblower Cruises & Events in New York on September 10th and then travel to the west coast to visit our California ports. When you see the ball and its entourage be sure to stop and get your picture taken by our Marketing team as we will be sharing your love to the world! When you see it don’t forget to snap a picture yourself and use the hashtag #theloveboat #hornblower #bigloveball because after all it really is the love boat!

A LABOUR OF LOVE

With scorching hot summer temperatures, guests from around the world were looking for ways to cool off and beat the heat and what better way than with a daytime boat ride.This Labour Day Monday was off to a great start when the massive ball was brought by it’s entourage to the Hornblower Landing where visitors were surprised when they discovered the giant ball of fun. We asked guests what type of love they were celebrating and for some it was visiting Niagara Falls, Ontario for the first time while for others it was being in the presence of their family and friends while on vacation. As the ball went out on multiple trips aboard the ‘Niagara Wonder’ and the ‘Niagara Thunder.’ The ball was the talk of the boats as guests from Belgium, Israel, Chicago, Illinois, Italy, India and Venezuela and even our friendly neighbors in Toronto, Ontario had a chance to get their picture taken with the famous love ball. The ball will continue making its debut among the crowds until Thursday, September 10, 2015 before travelling to New York City at Hornblower Cruises & Events.

WHERE DID THE BALL ORIGINATE FROM?

The giant white love ball is big love note with a social conscience. Created by Wendy Williams, a Vancouver designer the ball was originally placed in her studio and quickly admired by pedestrians. Today, the ball is seen around Canada and the United States bringing lots of love to special events, weddings and most recently to Hornblower Niagara Cruises.

Each and every day we see thousands of guests from around the world who are sharing their love for Hornblower Niagara Cruises and sharing it online through our social media pages and hashtags. If you are visiting Hornblower Niagara Cruises in the next few days and would like to see your picture on our social media with the love ball, be sure to stay cool and take a boat ride and who knows you might just end up on social media pages. Don’t forget to use hashtags #theloveboat, #hornblower, #bigloveball

Share Article
Twitter Facebook
Previous Story IS IT OR ISN’T IT? YOUR QUESTIONS ANSWERED ABOUT NIAGARA FALLS
Next Story GOING BACK TO SCHOOL WITH HORNBLOWER NIAGARA CRUISES