Cruising The Bay In The Off-Season

Brands » Alcatraz City Cruises » Cruising The Bay In The Off-Season 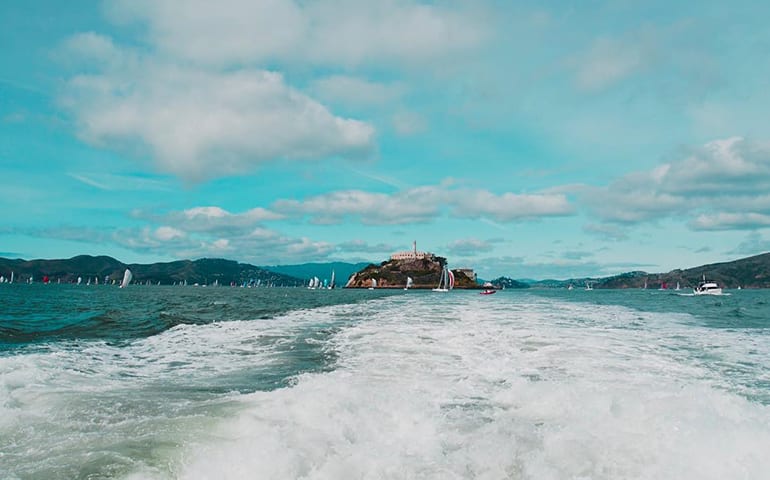 Cruising San Francisco Bay during the off-season is an experience that encompasses mysterious weather, slower crowds and freedom to roam.
So, what do the locals do to take advantage of winter on San Francisco Bay?
To begin, those in the know will be exploring Alcatraz Cruises’ special off-season features, which include the Buy One Get One Free (BOGO) (www.alcatrazcruises.com/bogo) offer. You’ll want to check out these options to find insider secret deals!
In addition to winter offers, those that embark on a journey to one of the country’s most popular attractions, namely Alcatraz Island, will be entertained by views of some of San Francisco Bay’s most iconic landmarks, which include the Golden Gate Bridge, city skyline, Sausalito, Coit Tower and the Bay Bridge with its nighttime light show.

But it doesn’t stop there. While the views are all over the place during an Alcatraz Cruises’ excursion to The Island, there’s more to explore when you “Escape from ‘The Rock’.”
As one of the country’s largest national park sites, and the umbrella for which Alcatraz Island rests under, the Golden Gate National Recreation Area (GGNRA) is also comprised of several other notable sites, including the Maritime Museum, Fort Mason, Fort Point, Point Bonita and Muir Woods, to name a few.
San Francisco Maritime Museum:
This park is all about history and culture, where visitors will find essential information for exploring and discovering the park’s stories of Pacific coast maritime history, including exhibits on the following:
People – Biographies and stories of sailors and waterfront characters.
Places – Guides to the historic Aquatic Park and the San Francisco waterfront.
Stories – Tales of struggle and daring on the high seas, voyages along the byways of the waters and sloughs of San Francisco Bay.
Collections – Discovery of the largest National Park Service museum, archives, library and small craft collection, including the park’s fleet of historic ships and small craft.
Fort Mason:
Fort Mason Center for Arts & Culture is located along San Francisco’s northern waterfront between Aquatic Park and the Marina Green. With 1.4 million annual visitors attending thousands of annual events, exhibitions and performances, Fort Mason Center for Arts & Culture is a vibrant cultural hub located within the Golden Gate National Recreation Area. Public transportation is recommended as parking is limited. For information about upcoming events, visit https://fortmason.org/events/.
Point Bonita:
A secret jewel of the Bay Area, the Point Bonita Lighthouse was built in 1855 and was the third lighthouse built on the West Coast to help shepherd ships through the treacherous Golden Gate straits. Maintained by the U.S. Coast Guard, the lighthouse is still active and surrounded by wild landscape, geology, fascinating history and hiking.
Muir Woods:
Muir Woods National Monument is just north of San Francisco and is known for its towering old-growth redwood trees with trails that wend among the trees to Cathedral Grove and Bohemian Grove and along Redwood Creek. The Ben Johnson and Dipsea trails climb a hillside for views of the treetops, the Pacific Ocean and Mount Tamalpais in adjacent Mount Tamalpais State Park.