Where to Eat, Drink, Walk (and Spot a Famous Actor) in Charleston, SC 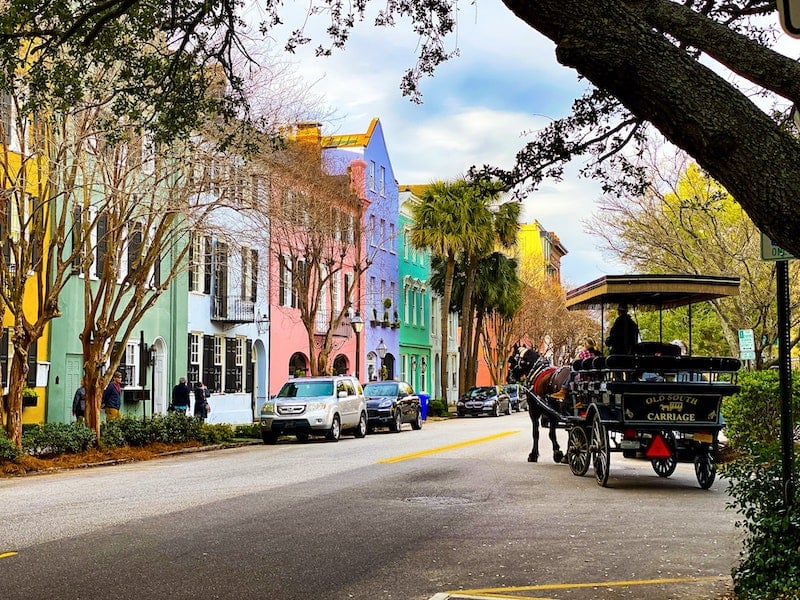 When you spend time in Charleston, South Carolina, you’ll see why it was recently named the top U.S. destination by readers of Travel & Leisure magazine—for the 10th year in a row!

The historic port city dates back to the 1600s (it was named after King Charles ll) and is rich in Revolutionary and Civil War history, architecture, and culture.

Indeed, you can spend days exploring its stately homes and plantation ruins. There are numerous options when choosing a historical tour.

If you’re inspired to see Charleston on foot, make a reservation for the Strolls Uptown Walking Tour or the Walking History Tour. You’ll see the north part of town that used to be outside the original walled city with charming neighborhoods like Rainbow Row. Also, see what plantation life was like at the Joseph Manigault House.

After taking in all this history, it’s time to replenish with some classic southern food. 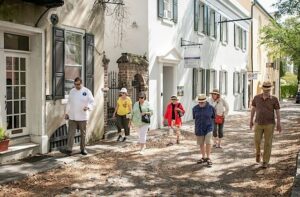 Food tours are a convenient and fun way to get to know a region. Charleston’s low country cuisine is heavily seafood-based and includes iconic Southern dishes like shrimp and grits, French influences, BBQ, and modern American fare. But Charleston cuisine also has strong influences from the Gullah creole African Americans who settled on the islands nearby.

Take a food tour to learn about the culinary history and culture of Charleston, South Carolina. Your guide will be a local who can tell you about each stop along the way and tell stories about how the city’s food culture has evolved.

You’ll get to sample different foods from local restaurants and specialty shops! The walking tour lasts two to three hours and includes stops for bathroom breaks. Come prepared for walking in any weather.

If you’re not in the mood for food, you can sip your way through Charleston with an evening tour of local breweries led by a city guide who knows all the best places to stop along the way. You might even see the legendary actor Bill Murray during your pub and restaurant crawl. “Not only does he live in Charleston, but he co-owns the Charleston Riverdogs baseball team {his official title is ‘Director of Fun’} and he frequently stops in bars and restaurants around the city,” notes a travel blogger.

The H. L. Hunley was a Confederate submarine used to sink a Union vessel in the American Civil War. It was the first submarine in United States history to sink another ship. The submarine was small, seating only ten people in sitting positions. However, diving teams in 2000 brought up dozens of artifacts. The museum’s interactive displays let you try out equipment used during that era.

The Hunley Museum tour experience is an immersive one. You feel you’re traveling back in time as your guide tells stories about those who served on this remarkable vessel. 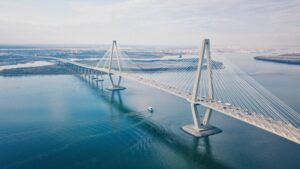 To experience another side of Charleston, be sure to get out on the water.

Harbor cruises take you to Charleston’s most iconic sites, like Fort Sumter where patriots fought back the British during the American Revolutionary War and defended against the union army during the Civil War.

Also, you’re likely to spot some friendly dolphins that often accompany the tour boats through Charleston’s harbor. A harbor cruise is a relaxing way to get a comprehensive overview of the city and unforgettable panoramic views from the water.

Here are some of the harbor cruises you can choose:

Get out on the water in a different way — on a kayak.

A Kayak eco-tour takes you through Folly Creek and Lowcountry marshes, where you’ll see sweetgrass, pluff mud, dolphins, pelicans, and loggerhead turtles. Your guide helps you spot animals and leads you on a safe, fun route through tidal creeks and marshes.

When you’re back on land, be sure to check out Charleston’s ghostly history. The Spirits of Magnolia Cemetery Tour is a comprehensive tour about the ghosts who haunt some of the city’s historic sites, including the Old Exchange Building.

The tour guide will lead you through famous graveyards in town, including St. Michael’s Cemetery, the burial site of author Edgar Allan Poe, and St. James Churchyard, which is known for being haunted by Revolutionary War soldiers who died during an attack on Fort Moultrie by British troops in 1776.

Expect to see other burial sites outside homes throughout downtown Charleston that are said to be restless spirits who refused burial inside church walls—or couldn’t afford it!

Located in downtown Charleston, the Provost Dungeon is a historic prison that operated from 1802 until 1865. It held prisoners during the Civil War and was home to some gruesome tales of torture, imprisonment, and death behind the centuries-old walls.

The Ghost and Dungeon Tour includes access to areas not open to the public, such as cell blocks and underground passages. Or opt for the VIP Ghost Tour to visit both the Graveyard and Dungeon on one tour.

There is so much to do and see in Charleson, so have fun and keep an eye out for Bill Murray. You just might see him napping on the sidewalk next to a baby! !