Skip to content
Brands / Alcatraz City Cruises / Buy One, Get One Free Promotion

Buy One, Get One Free Promotion

Brands » Alcatraz City Cruises » Buy One, Get One Free Promotion 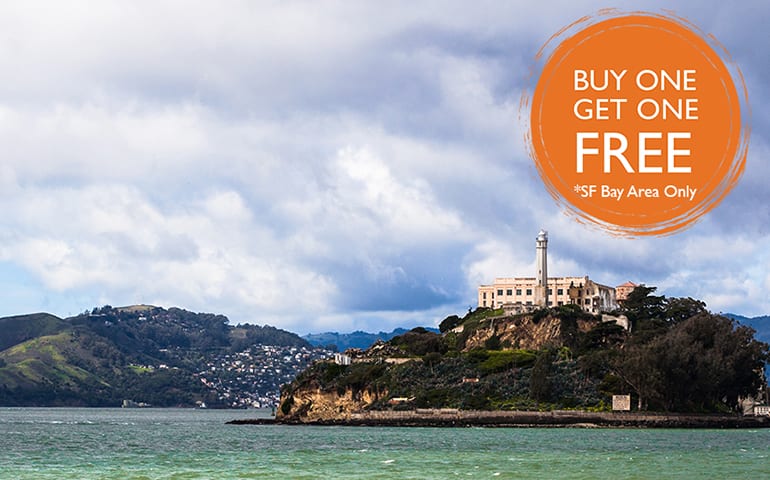 Alcatraz Cruises is launching its second annual “Buy One, Get One Free” (BOGO) ticket promotion.
Although Alcatraz Cruises’ tours often sell out during the year, it is a priority to educate the community about the robust history of the Island. As a result, Alcatraz Cruises wants to encourage local residents to experience the assets that make Alcatraz Island one of the country’s most visited national parks. Offered only to Bay Area residents*, this special “Buy One, Get One Free” ticket promotion is available only on the following 2019 dates:
January 8-9, 15-16, 22-23, 29-30
February 5-6, 12-13, 19-20, 26-27
*Only residents of the following counties are eligible: Alameda; Contra Costa; Marin; Napa; San Francisco; San Mateo; Santa Clara; Solano; and Sonoma.
For more information visit https://www.alcatrazcruises.com/bogo/. To book this special offer, Bay Area residents must call 415-981-7625 or purchase tickets at the Ticketbooth located at Pier 33 Alcatraz Landing.
Terms & Conditions:

History of Alcatraz
“Despite what they tell you, I think they feel a little nostalgic. I think they’re going to miss this place.” – Alcatraz director Fred T. Williamson when the last inmates were shipped out in 1963
Few islands in the world can boast such a glorious natural setting – and grim human past – as Alcatraz. Visited by Native Americans as early as 10,000 years ago, the barren island remained uninhabited until Europeans arrived. Spanish and Mexican settlers in the early 1800s called the guano covered island “Isla de los Alcatraces” – Island of Pelicans.
Not long after the island was acquired from Mexico in 1848, the U.S. Army built what would become the largest defense fort west of the Mississippi River during the Civil War (1861-1865). Alcatraz also became a beacon for ships entering the treacherous waters of the Golden Gate after its lighthouse, the first on the West Coast, went into service in 1854.
Alcatraz began its long era as a dreaded place of confinement when soldier-convicts were first imprisoned at the fort in 1860. Over the next decades, the island became less of a defense fort and more of a military prison, with Army convicts building most of the structures still standing on Alcatraz today.
Alcatraz was reborn as a civilian Federal Penitentiary in 1934, becoming known in the press as “The Rock” and “America’s Devil’s Island.” Wardens at Atlanta, Leavenworth and other federal prisons selected their most unruly convicts to transfer there, among them Al Capone and “Machine Gun” Kelly. No less tough and carefully selected were the correctional officers, one for every three prisoners, who were trained to use their wits as well as their muscle when trouble broke out.
Alcatraz was the most escape-proof prison in the nation. Even if a convict could get past the remote-control locks, guard towers and barbed wire, he had to struggle against swirling tides and icy waters to reach shore. Yet, escape was uppermost on the minds of many inmates. “Alcatraz is becoming a prison of madmen and men half mad,” Al “The Bug” Loomis, a bank robber once incarcerated there, wrote in 1938. “The sustaining hope is escape.”
Over the years, escapees fashioned crude water wings and wooden flippers and attempted the swim, but either drowned or were caught while swimming. In 1962, convict John Paul Scott became the first and only penitentiary escapee to reach the San Francisco shore. He was discovered unconscious on the rocks of Fort Point, purple and shivering with just his socks on. Too weak to continue, he ended up back where he started.
In that same year, Attorney General Robert F. Kennedy announced the phase-out of the prison. Alcatraz was turned over to the General Services administration as surplus property and most of the inmates were transferred to a new facility in Marion, Ill. Over the next few years, hundreds of proposals were submitted for new uses for the island, including a West Coast version of the Statue of Liberty, a casino resort and space museum.
In 1969, a group of 300 Native Americans began a 19-month occupation of Alcatraz, claiming rights to the island under an old Sioux Treaty that gives Native Americans the right to homestead unused federal lands. While the Occupation put a media spotlight on Native American issues, the numbers of activists gradually dwindled and Federal marshals removed the last few from the island in June 1971. Each November Native Americans of many tribes return to Alcatraz to hold a sunrise ceremony commemorating the Occupation.
In 1972, Alcatraz became part of the newly designated Golden Gate Recreation Area, a unit of the National Park Service. Tours of Alcatraz began the next year, now drawing some 1.7 million visitors a year to a place so many men had once dreamed of never seeing again.