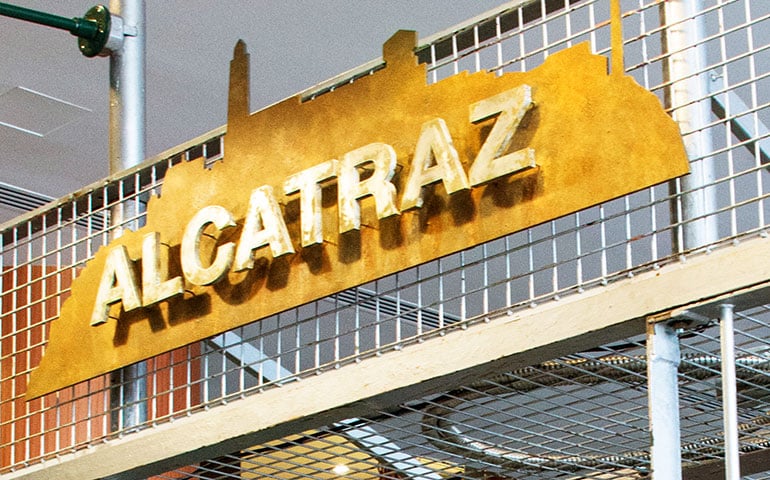 “Alcatraz: Life on the Rock”
“Alcatraz: Life on the Rock” is an exhibit that showcases Alcatraz Island’s fascinating history and infamous inmates. Specific installations include “How Do You Know Alcatraz?” which offers a compelling introduction, complete with a model of the island and a look at The Rock’s place in history and in movies.  Additionally, there are four quadrants that feature the following: a “Military History”; an authentic replica of a prison cell that is the centerpiece of the “Life on the Inside”; “Strength: The Native American Indian Occupation”; and “Preserving the Rock.” There are also several artifacts featured, including former guard Jim Albright’s original uniform.

“Alcatraz: The Last Day”
Upon the announcement of the Alcatraz Penitentiary closure in 1963, Life Magazine called upon California-based photographer Leigh Wiener to document the momentous occasion. While Wiener had a large lay-out in the 1963 issue of Life Magazine, many of Wiener’s 300+ photographs that were captured on March 21, 1963 remained unpublished and filed away in his archive until they were revealed 45 years later. In 2008, while inventorying his late father’s photographic legacy of nearly 1/2 a million proof sheets and negatives, Devik Wiener would discover this treasure trove of images taken on the closing day of Alcatraz. Twenty-five of these images are now included in the display to complement the exhibit “Alcatraz: Life on the Rock.”

The “Alcatraz: Life on the Rock” and “Alcatraz, The Last Day” exhibits are free to the public and accessible 24/7. Parc 55 Hotel is located at 55 Cyril Magnin Street and Hilton Union Square is right across the street at 333 O’Farrell Street.

Visit https://www.alcatrazcruises.com/traveling-exhibit/ for information about “Alcatraz: Life on the Rock” and “Alcatraz: The Last Day”