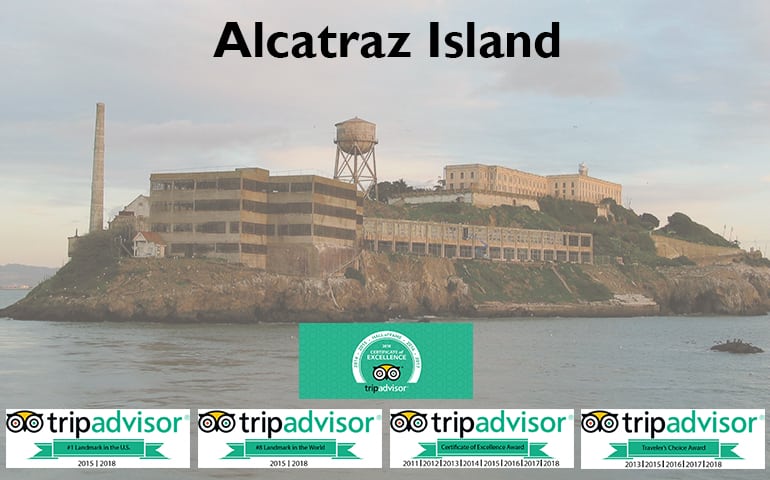 Once again, Alcatraz Island has been named as the #1 landmark in the United States, according to TripAdvisor’s 2018 Travelers’ Choice Awards. Additionally, Alcatraz Island was named as #8 in the world, alongside such iconic landmarks as Angkor Wat, which came in as #1 worldwide, as well as Taj Mahal, the Golden Gate Bridge and Notre Dame.
According to TripAdvisor’s description of Alcatraz Island, “For almost 150 years, Alcatraz has given chills to the innocent and cold sweats to the guilty. Having once been a forbidding maximum-security penitentiary, Alcatraz is now part of the Golden Gate National Recreation Area [one of America’s 407 National Park sites] and is this year’s #1 Travelers’ Choice Landmark in America. The roster of former Alcatraz inmates includes A-list criminals such as crime boss Al Capone and kidnapper George Kelly. Though it was considered escape-proof, in 1962 the Anglin brothers and Frank Morris infamously floated away on a makeshift raft and were never seen again.”
Alcatraz Cruises is the National Park Service concessioner of ferry service to Alcatraz Island in San Francisco Bay and hosts over 1.7 million visitors annually. Alcatraz Cruises designed, built and operates the first hybrid ferry in the United States. The Hornblower Hybrid’s revolutionary design has reduced fuel consumption by 75% and has already begun to be implemented in other parts of the country. For more information visit our Respect Our Planet.

As reported by SFGate, “Bay Area locals know San Francisco for its beautiful sights and landmarks — but it looks like we’re not the only ones who’ve noticed. Leave it to our city to not only land a former federal prison on a tourist list, but also convince people that a bridge many use for their daily commute is one of the most gorgeous spots in the U.S. and the world.”