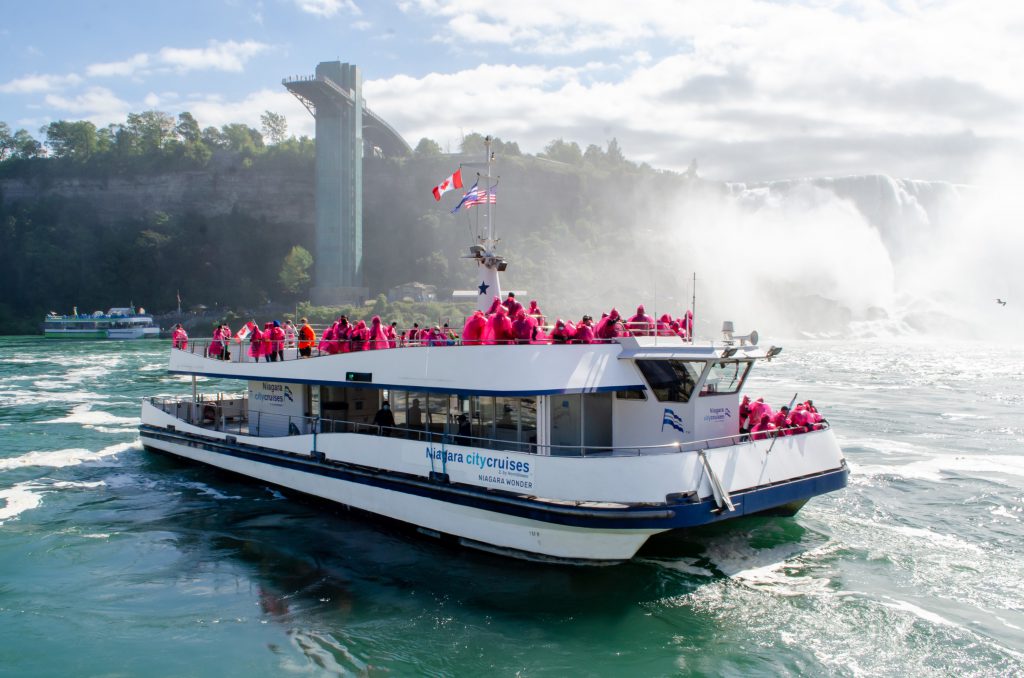 NIAGARA FALLS, ON. — Hornblower Niagara Cruises has closed the year a much greener company than where it was a year ago.
Coming off another successful season at the turnstile — more than 2.3 million people took to Hornblower’s catamarans for a unique view of one of the world’s natural wonders, Niagara Falls, including welcoming their 10 millionth visitor in September — Hornblower also made a strong commitment to make 2018 the year when they put a hard push on more responsible and smart environmental practices. Through an initiative known as Respect Our Planet, Hornblower has made a commitment to cleaner air, cleaner water, and a cleaner future.
“Hornblower Niagara Cruises’ Respect Our Planet program shows our commitment to protect and conserve our natural resources and raise awareness to reduce our environmental impact,” says Mory DiMaurizio, Vice-President and General Manager of Hornblower Niagara Cruises. “Over the past year, we have instituted more responsible and comprehensive recycling programs, moved to a broader online and digital ticketing system, green procurement, annual waste audits and participation in tree planting and clean sweep programs within the community, to name a few.”
Among the initiatives executed by Hornblower Niagara Cruises in 2018 include:

“Through this initiative, Hornblower Niagara Cruises saves millions of ponchos from ending up in our landfills,” says DiMaurizio. “By doing so, we live up to our commitment to protect our natural resources and ecosystems and leave the planet a better place than when we began.”

“With Respect Our Planet, we made a commitment to reduce the waste coming from Hornblower Niagara Cruises,” says DiMaurizio. “We take our role as advocates for the environment very seriously, and are proud of using more environmentally friendly products for our food packaging.”

“Improving waste diversion rates is one of the most effective ways to reduce your environmental impact,” says DiMaurizio. “In a landfill, garbage sits and festers for years, while creating potentially harmful byproducts. We’d much rather take steps to find new uses and new life for products that are no longer useful for us.”
Hornblower Niagara Cruises has been running boat tours on the Niagara River below the Falls since 2014. Operating two state-of-the-art catamarans, the Niagara Wonder and the Niagara Thunder, Hornblower offers one of Canada’s favourite tourism experiences. Each boat boasts unobstructed 360° views, wifi and refreshment service.
“We are coming off a great 2018, and are looking forward to an even better 2019 when we expect to return the funicular incline railway to service,” says DiMaurizio. “Thank you to our partners in Niagara’s tourism industry for helping us provide a visitor experience that is second to none.”
For more information, please visit niagaracruises.com. Follow Hornblower Niagara Cruises on Twitter @CruiseNiagara and Like it on Facebook.
About Hornblower Niagara Cruises:
Hornblower Niagara Cruises is the official Canadian operator of boat tours in Niagara Falls, Canada, and is a sister company of Hornblower Cruises and Events; a North American company based in San Francisco, California, with more than 100 vessels and 30 years of experience operating various types of marine services across the east and west coast.  As Canada’s most iconic visitor experience, the Niagara Falls boat tour operation hosts millions of visitors a year. In September 2018, Hornblower welcomed its 10 millionth visitor.