Things to do in Pensacola

THINGS TO DO IN PENSACOLA

What to do in Pensacola

The History Of Pensacola

Known for its white sandy beaches, Pensacola, Florida is a very popular and exciting tourist attraction for people to visit from all over the world. It is one of the furthest western cities in the Florida Panhandle and is only about 13 miles from the Alabama border. Pensacola is located in Escambia County and the current population is just under 53,000 residents. The entire Pensacola metropolitan area, however, has over 450,000 people who call the area home.

Pensacola was given the nickname of “The City of Five Flags” due to the multiple nations that have at one time governed the area. These countries include Spain, France, Great Britain, the United States of America, as well as the Confederate States of America during the Civil War.

What To Do In Pensacola

Here is just a sample of the many fun and exciting activities to explore when visiting Pensacola. With over 2 million visitors per year, the area has something for everyone.

Located on the Gulf Coast, the current lighthouse in Pensacola is actually the third to occupy the area. The first lighthouse was called the Aurora Borealis and was moved to the area in 1823 from the mouth of the Mississippi River. The position in which it was placed (inside the bay) was not optimal for sea traffic, so another 40-foot tower was built at the Bay’s south entrance in 1825. The newest and current lighthouse was constructed in 1859 and sits on the grounds of what is now the Pensacola Naval Air Station. 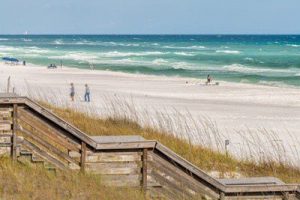 Beyond the white sand beaches on the Gulf of Mexico, there are numerous state parks in Pensacola that truly have something for everyone. Families also love to hike, canoe, kayak, swim, camp and picnic while at one of the parks. The state parks include Big Lagoon State Park, Blackwater River State Park, and Tarkiln Bayou Preserve State Park.

This spectacular museum is the largest naval aviation museum in the world. It is also one of the most popular museums in the entire state, attracting many thousands of military history buffs from across the world. The 350,000 square foot complex sits on 37 acres and displays over 150 restored military aircraft from the United States Navy, Marine Corps, and Coast Guard. Aircraft from the earliest days of aviation to the modern flying marvels of today are waiting for visitors to learn about and enjoy. The museum’s west wing is devoted to the airplanes and equipment that helped win World War II. There is something for everyone at this incredible facility.

The world-famous Blue Angels are the United States Navy’s premier, flight demonstration team. Founded in the closing days of World War II, the squadron today utilizes six McDonnell Douglas F/A-18 Hornet jets, flown by both Naval and Marine Corps pilots. The Blue Angels put on more than 60 shows per year, in over 25 locations throughout the nation. Over 11 million aviation enthusiasts get the chance to see the elite Navy flying team perform annually. The Blue Angels home base is located right here in Pensacola, where they regularly practice during the show season. Visitors to the city can obtain a schedule of the team’s practice days, as well as attend an autograph session at the Naval Aviation Museum.

The Pensacola area is rich in Civil War history. The Battle of Pensacola occurred between January and November 1861, during the early days of the conflict between the northern and southern states. In fact, the battle in the city started 2 days prior to the official date that Florida seceded from the Union. The Union forces were outnumbered by more than 3:1 and the Confederate Army would ultimately claim victory. History enthusiasts can visit sites around the city related to the famous battle.

The Gulf Islands National Seashore is part of the National Park Service. America’s largest national seashore is home to Fort Pickens, Fort Barrancas and the Advanced Redoubt fort. GUIS will celebrate their 50th anniversary in 2021.

Pensacola Bay Cruises offer a variety of exciting ferry excursions that operate between Pensacola, Pensacola Beach, and Fort Pickens. The cruise boats offer comfortable travel with amenities such as air conditioning, onboard restrooms, interior and exterior seating, top-quality beer, wines, and soft drinks. On specific trips, National Park Service Rangers come aboard and present informative presentations about the area’s natural beauty, wildlife, and landscapes. We offer some of the most breathtaking views of the entire Pensacola area for all passengers to enjoy. Each vessel can hold up to 100 passengers and private event bookings are also available. The ferries can be met at three convenient locations: Downtown Pensacola, Pensacola Beach Visitors Center and Fort Pickens (Ferry Plaza & Pier). If you are looking for an exciting water adventure, with beautiful views of the Pensacola area, join us for an unforgettable journey! Book your Pensacola Bay Cruises tickets to get started.