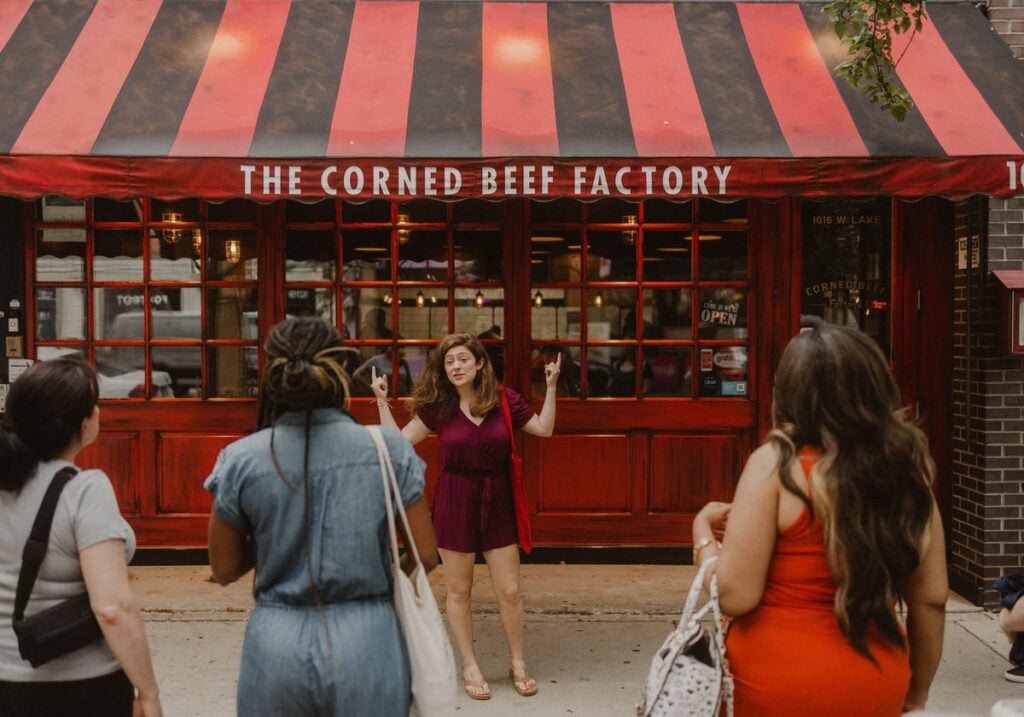 Chicago is the “largest city of the American Midwest” and “the third largest city” in the U.S. Founded in 1830, the city was “Established as a water transit hub; the city evolved into an industrial metropolis, processing and transporting the raw materials of its vast hinterland.”

In a city that was known as the meatpacking capital of the nation, things have certainly changed in Chicago. In 1971, the famed Union Stockyards were closed while “Fulton Market’s slaughterhouses have been replaced by food halls, swanky cocktail bars, and gastropubs, the city’s steakhouses remain bustling, mostly due to tourists, as well as businesspeople and conventioneers armed with buoyant expense accounts.”

Today the area that is known as the West Loop is a haven for foodies. “A former meat-packing district, the West Loop has become one of the most dynamic dining destinations in the city.” The area is now filled with some of the city’s most popular restaurants. Here, you’ll find Restaurant Row and Greektown. When you’re not eating your way through the area, you can check out art galleries, boutique hotels, and fun shops.

The Chicago West Loop Neighborhood Food Tour is the perfect way to indulge in the food that makes up this special city. It tours the West Loop neighborhood, where you’ll find all the food that makes Chicago a top-notch place to eat. The experience mixes up Chicago classics, international cuisine representing the area’s strong immigrant heritage, and dishes that locals actually eat. It’s the only food tour of its kind in the city, which is really exciting. 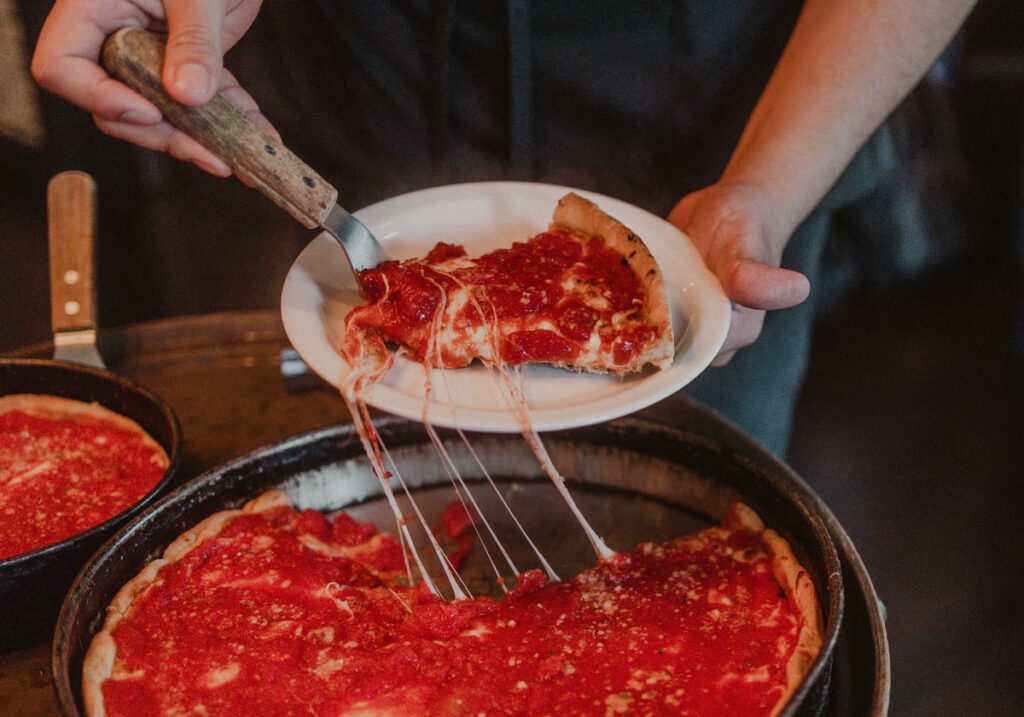 You’ll get to sample some of Chicago’s most iconic dishes along with foods created by famous chefs who have helped turn this neighborhood into what it is today. There will be new flavors to discover and the latest new hotspots that are all the rage. You’ll taste must-try Chicago classics to sweet treats created by a popular James Beard Award-winning chef.

Get Up Close and Personal with Chicago’s Deep-Dish Pizza

When you’re in Chicago, you have to try the deep-dish pizza. The city is known for it, brags about it, and the classic is just about everywhere you go. This Chicago-style pizza, cheesy and tomato-filled, was put on the map in fall 1943, when Pizzeria Uno opened.

History was made and many a mouth watered. The pies spread not just in Chicago but eventually all over the country. So, when you’re in Chicago, deep-dish pizza is a food you must indulge in.

Oprah Has Roots in this Trendy Neighborhood

From its earliest days, the West Loop has been an area of contrast, and you’ll learn about its “rags to riches” story. It was even helped along the way by Oprah Winfrey herself. You’ll find out more on this stroll through the neighborhood!

What was once Oprah’s former Harpo Studios building is now the headquarters for McDonalds.  A developer bought the studio in 2014 while production on Oprah’s show ended in 2015. “Harpo was home to the Oprah Winfrey Show from 1990 until it went off the air in 2011, staking Chicago’s claim as a media center and giving new life to the area west of the Loop.” 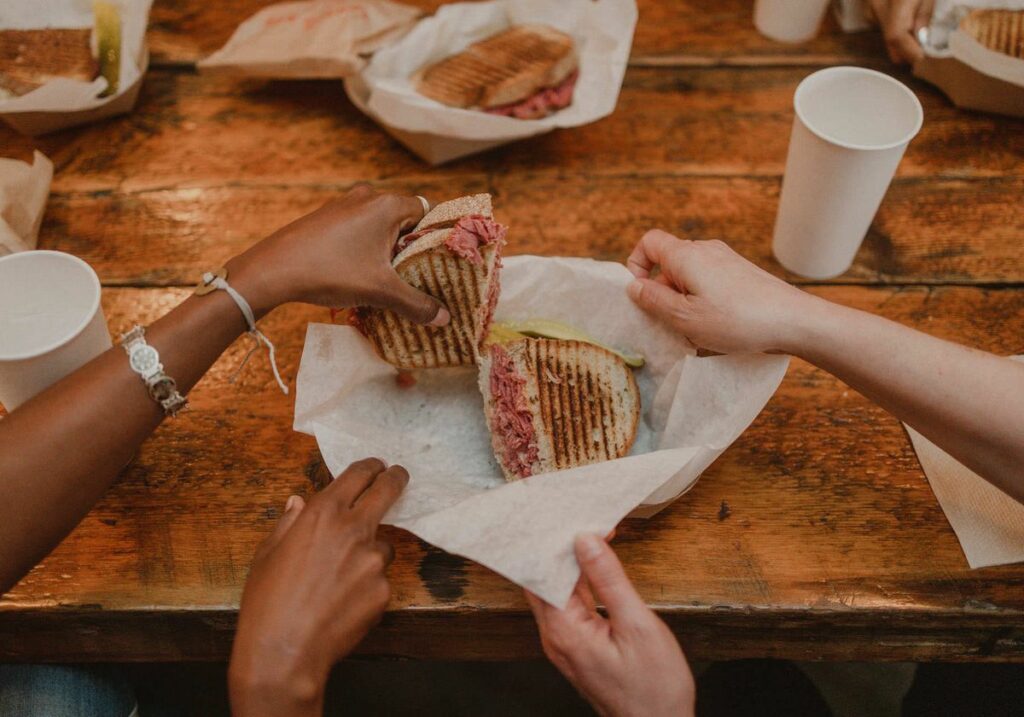 Getting to the Heart of a Corned Beef Sandwich

Then it’s time to take a stroll and stop into the next food establishment on this tasty tour. You’ll pop into a total neighborhood institution: a corned beef sandwich shop where the corned beef is prepared just around the corner—a true nod to this area´s meatpacking past!

It’s at this stop that you’ll find an entire corned beef sandwich that is actually produced onsite. It began as a factory, and later on, a storefront was added on, making it the perfect place to taste this delicious sandwich.

A Taste of Greece

Next on the list, you’ll continue to explore through the West Loop hotspots and step into the a popular food hall among the locals in Chicago. It was opened in 2019 and is truly a food lover’s paradise. It has provided up-and-coming chefs with the opportunity to try out their craft before they are able to open their own restaurant. The West Loop is the place to see and be seen, so it’s important for new chefs.

The West Loop is home to Greektown, and it has the third-largest Greek population in the US. Here, you’ll try delicious Greek food from a local Greek restaurant and get a taste of the traditional culture.

Delicious Donuts of Old with A New Flavorful Twist 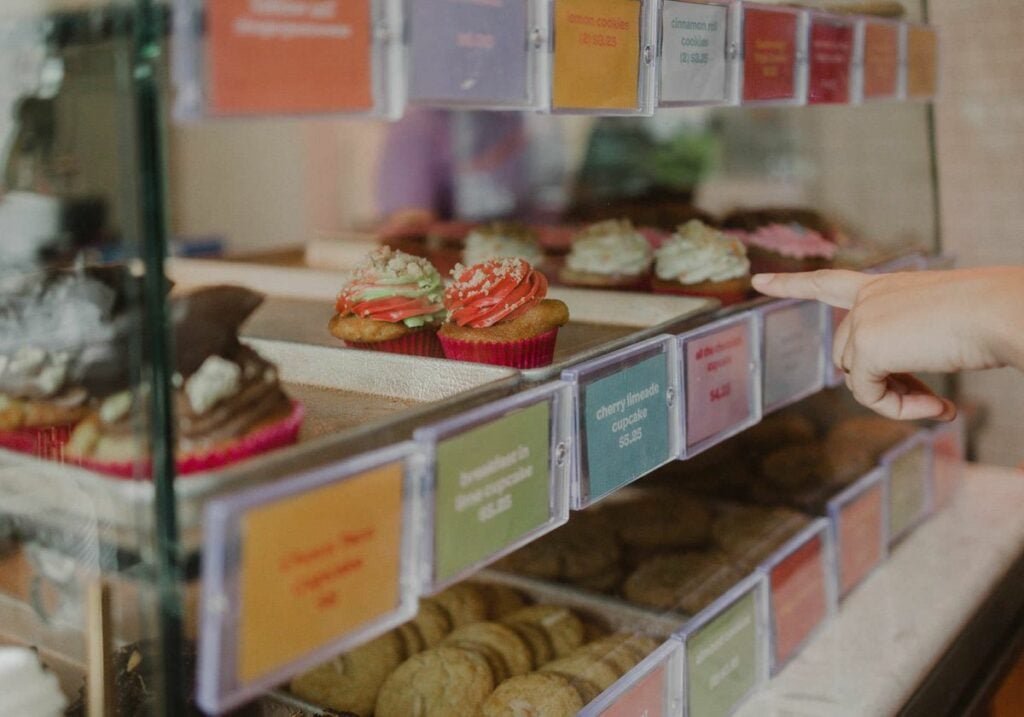 Next up on the tour is a taste of the sweet stuff that this neighborhood has to offer. You’ll stop for donuts at a small-batch donut shop owned by two former Michelin star pastry chefs who met while working in the pastry kitchen at a Michelin star restaurant. The chefs found out they were from the same town in California and each enjoyed the same favorite donut shop there.

In Chicago, they make small-batch donuts to include flavors such as maple bacon. You’ll try the old-fashioned kind, which is the hardest recipe for them to come up with due to the dough fermentation process.

Chicago truly never tasted so good. After you’ve done your share of weaving in and out of the neighborhood, and tasting the savory and the sweet, you might be ready for a nap. But you’ll dream of the deliciousness that Chicago has to offer, and you’ll want to come back yet again.