London and Its Beer-Brewing History

Things To Do » Eat & Drink » London and Its Beer-Brewing History 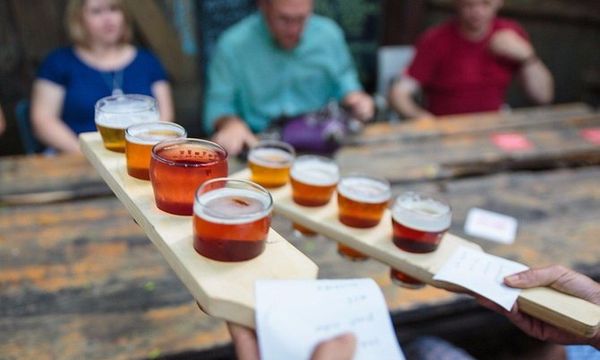 The length of the River Thames, and its excellent connections to England’s canal system and the open sea has always made it an excellent hub for national and international trade. Trade comes in all forms and shapes, so it’s probably not hard to imagine that once upon a time, the River Thames used to be lined with breweries producing beer to supply local pubs and eventually the world. A dream probably for many still today.
When trade with Asia increased in the 1700’s, East India Company traders became interested in these breweries on the Thames, which led to the creation of an export pale ale. The idea emerged to take the pale ale recipes, increase the ABV (Alcohol by Volume) and add additional hops. This addition made sure that the beer would survive the long journey to foreign climes. A new type of beer was born: the ‘India Pale Ale.’

The next consideration to be made was what the best way would be to store the beer on such a long journey. To ensure the best quality of the brew, it was preserved and transported in hogshead barrels. Taking all elements together: the changing climate, the wood of the barrels and the motion of the ship all helped to mature the beer in a unique, and the most optimal way.
This extraordinary way of beer brewing slowly died out, but in recent years more and more modern breweries have started using barrels to age their beers. The beers pick up the characteristics of the wood, creating one-of-a-kind flavours.

To take it even a step further, we are excited to announce that in cooperation with Gipsy Hill Brewing Company we will honour the craft of the English India Pale Ale (IPA), by inviting handmade barrels to be positioned on our boats this summer. An artistic nod to the classic way of brewing this type of beer, while we are trying to stay as close to the historic tradition as possible. Gipsy Hill Brewery will make a traditional English IPA, which will be matured in barrels while travelling the equivalent amount of time it would take to sail to India (approximately three-four months). The motion of the boats on the Thames, the wooden barrels and the duration will hopefully create a beer that is highly similar to the English IPA that the East India Company traders created in 1700’s.
It will be the first time in over one hundred years that a beer has been matured in handmade barrels replicating this process. Of course, we will follow its journey closely and report back on all the exciting events that we have lined up for this project. Care to join us?