What Happened During Niagara Falls’ Great Blizzard of 1977? 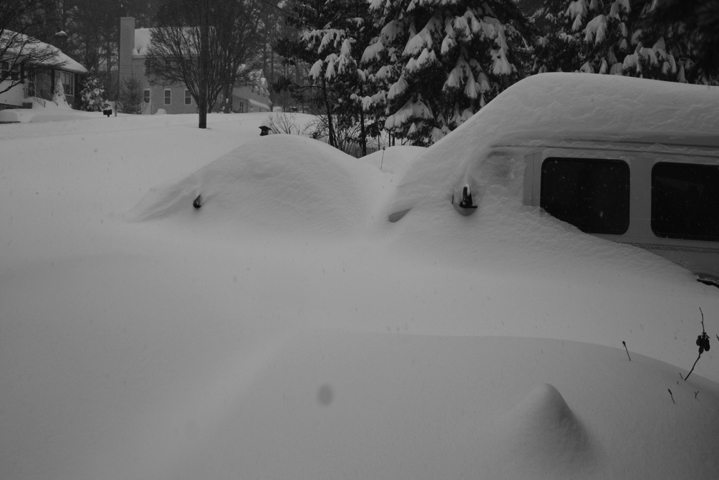 During the winter of  2015, tourists rushed to Niagara Falls after CNN reported the famous waterfalls had “frozen over.” While the natural wonder was certainly beautiful that winter (the Falls are beautiful any time of year, really), the frozen Falls hype wasn’t quite true. Yes, the Falls were somewhat frozen, but that happens almost every year.
If you ask Niagara residents, 2015 wasn’t so unique. To learn about a truly strange winter in Niagara Falls, Ontario, you’ll have to look back to the Blizzard of 1977.

The “Calm” Before the Storm

The date was January 27, 1977. Niagara Falls residents woke up to yet another headline about the weather: “Crews battle drifts, blinding snow. Fort Erie hit hard.”
The Niagara Falls Review detailed how lakeside towns just a few miles south of Niagara Falls, Ontario had been hit by yet another overnight storm. Roads were covered by up to four feet of snow, and rural residents found themselves completely shut in.
It had been a tough winter, and this was far from the first story about snow-stricken streets. Officials were completely out of ideas for how to deal with the increasingly brutal weather. Their budget was stretched, their workers were exhausted, and their equipment wasn’t up to the task.

Plows had been working day and night to clear the roads of Fort Erie, Wainfleet, Pelham, and Port Colborne, but results were lackluster. “What good are they going to do if they can’t go anywhere and are running into each other?” the superintendent of roads told the papers. He admitted to reporters that he was “ready to contact his travel agent and head to Florida.”
The superintendent of the city’s work department in Niagara Falls had even less to offer, admitting that he had “about given up trying to predict the weather and how best to deal with it.”
On January 27, 1977, the forecast was foreboding and the city was out of options. But if the superintendents felt overwhelmed then, they were in for quite the battle in the days to come.

Between January 28 and February 1 1977, 50 mile per hour winds blew the heavy snow atop Lake Erie wildly around the region, coating the surrounding 16,000 square kilometers. The snow accumulated into drifts as it blew, burying everything from cars to bus stops in 20 to 40 foot snowdrifts.
This was more than your average “snow day.” This was the Blizzard of 1977.

While the blizzard officially lasted five days, Niagara residents often remember the days before and after the infamous storm – the winter of 1977 – just as well as those treacherous days and nights. The weather prior to the storm and environmental factors around Niagara Falls are critical to understanding how it got so bad.
” … up until the blizzard began on January 28th, 1977, it had snowed every day since Christmas of 1976, leading to a whopping 150 cm of snow falling prior to the blizzard in January alone …”

At the center of the story is Lake Erie, whose coast is a short 30 minute drive from Niagara Falls. Lake Erie is the shallowest of the Great Lakes, which means it is the most likely to freeze over in the winter. It hasn’t done much freezing in the 21st century, but the winter of 1976-77 was a whole different story. That year, the lake froze over 100% by December 14.
That’s a big deal. By comparison, Lake Erie was only 3 percent covered in ice on January 25th 2017.
Once the lake froze over that cold December, snow began to fall. And fall. And fall. Nearly 60 inches of light, fluffy snow came down between December 25 and January 28, 1976 – that’s about three times the current 30-year average for the region. This daily precipitation quickly covered the large frozen lake.

Lake Erie is no small space – its total area is nearly 10,000 square miles, with a coast stretching from Detroit to Buffalo, New York.  By January 28, 1977, three feet of snow had gathered across the expanse of the lake. There were only two things that could have happened at that point – the snow would either melt with the coming spring, or it would blow off the lake.
Guess which of these scenarios played out that year?

What did the people do during the Blizzard of 1977?

Many people reading this either lived through or know someone who lived through the Blizzard of 1977. Those who live in the Niagara region will tell you that they are used to the environment defining their lives. The unique Niagara peninsula dictates where and how they build their homes. It defines the crops they grow (we all know about Niagara wineries!) and the businesses they run. It brings people from all over the world to their doorsteps, hoping to see a natural wonder up close on a Niagara Falls boat tour.
Yes, people in the Niagara region are not strangers to managing diverse weather and navigating sprawling landscapes. But nothing, not even a strong awareness of the land and the lakes, could have prepared them for the Blizzard of 1977.
On January 28 of that year, Hurricane-level winds broke windows, pushing ice and snow into people’s homes. Visibility was close to zero on whited out roads, causing people to abandon their vehicles everywhere from QEW highway ramps to rural streets. Frostbitten drivers were rescued by snowmobiles and delivered to strangers’ homes for immediate care, while emergency workers and plow drivers worked shifts of up to 36 hours with only “cat-naps” for rest. The snow-covered cars which littered the streets made it nearly impossible for plows to help clear the snow. Unsurprisingly, a state of emergency was called in both the United States and Canada as the storm whipped its way through both sides of the border.

There are heartwarming stories from the Blizzard of 1977: Strangers shared food and shelter with those in need, volunteers rescued people stranded outside, and teachers diligently cared for the 2,000 students snowed in at 24 local schools.
“I have never seen such an all-out public effort to help each other. The service of snowmobile crews, my officers, others in the public service and by volunteers from the general public has just been marvelous.”

Many people pitched in to support others, but not everyone made it through safely. While many were saved by emergency efforts, lives in both Ontario and New York were lost over the course of the storm. Many people returned to find their stranded vehicles and businesses looted once the weather settled down, and according to local historian Erno Rossi the total cost of the storm reached 300 million dollars. Despite these tragedies, the memories of life-saving help from neighbours, community members, and emergency services linger for many Niagara residents.

Yes indeed.
The storm was not in full swing across Niagara Falls until midway through January 28, 1977. This was a Friday, and up to  2,000 students from 24 schools had made their way to classes in the morning. The storm, which was in full swing by 11:30 am, made it impossible for most of them to get home. Instead, they were trapped inside classrooms overnight. Among the stranded students were 700 individuals at Niagara College and hundreds of young people in elementary and high schools across the region.

Could a blizzard like the one in January 1977 happen again?

Recent weather patterns make another blizzard like this unlikely – but not impossible. Any region near a shallow lake which freezes over is at risk of an incident like the Blizzard of 1977.
One clear lesson was learned in 1977:  keep an eye on snow that accumulates on a body of water…especially if that body of water is massive and shallow, like Niagara’s Lake Erie.
As a tourist attraction in Niagara Falls, Ontario, many people ask us about the weather before they visit. We tell them that snow tends to fall in the Niagara region between December and March each year. January is often the coldest and snowiest month in Niagara Falls, Ontario with an average temperature of -4.2 degrees celsius (-24.4 degrees fahrenheit). An average of 46 centimeters (18 inches) of snow falls in January – a far cry from the nearly 150 centimetres that whipped through the region in January 1977!

After hitting lows in January, the temperature in Niagara Falls tends to increase slightly as the year progresses, allowing us to start our tours as soon as April 1 and run them as late as November 30. Since the cold weather occasionally decides to stick around longer or start a bit earlier in the year, Hornblower Niagara Falls’ boat tours are equipped with insulated below-deck area where you can watch the Falls from behind windows in case it gets too chilly.
Were you around during the Blizzard of 1977? Or have you ever taken a Niagara Falls trip when the weather outside was frightful? Let us know in the comments or on social media! We will be posting local history articles throughout the year, and would love to hear the experiences and insights of people across the region.