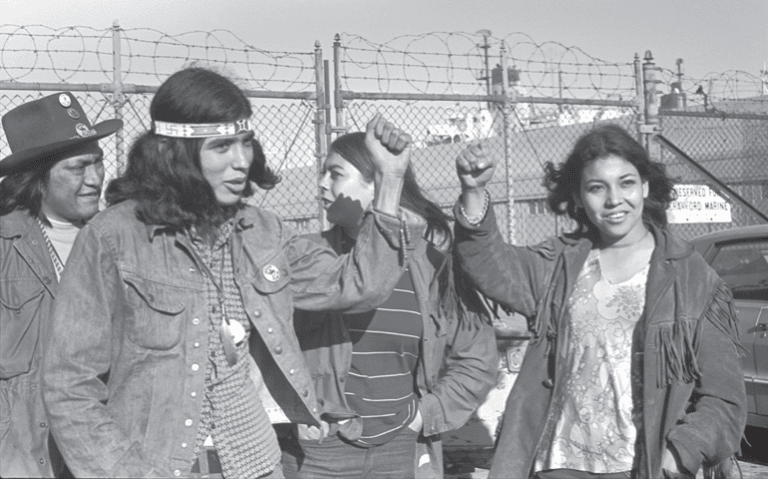 In 1969, a group of Native American activists called the Indians of All Tribes arrived on Alcatraz Island. They spoke out against the United States government’s termination policy and the broader plight of Native Americans. GGNRA commemorates this history with a special exhibit “Red Power on Alcatraz: Perspectives 50 Years,” which tells the story of their 19-month occupation of the Island, a watershed moment in the movement for Native American civil rights. The exhibit, which will be on display for 19 months, invites visitors to view photographs by Ilka Hartmann and Stephen Shames, original materials from the collection of Kent Blansett and contributions from the community of veteran occupiers. For more information, please visit https://www.nps.gov/goga/red-power-on-alcatraz.htm.

Notes about the artists

Ilka Hartmann came to the United States when she was almost 23. Originally a student of protestant theology, she soon fell in love with photography. At the University of California in Berkeley, where she was studying German Literature and teaching German language, she was deeply affected by the anti-Vietnam War Movement because she had been born in a war herself, World War II. As a young girl growing up in post-war Germany, she learned in school about her country’s recent discrimination, persecution and eventual murder of millions of people. In the 1960s at Berkeley and nearby San Francisco State, there was also a rising awareness that the different ethnic groups of this society were not represented equally nor in the curriculum of the universities.

Soon a strong protest movement for ethnic studies broke out at both schools, known as “The Third World Strike” in 1969. Ilka took part in the strike and photographed the marches and rallies for the student newspaper, “The Daily Cal.” During this time, she learned of La Nada who was the spokesperson for the small Native American club on campus.

On November 9, 1969, she saw in the Daily Cal that during the night, 14 people had taken a boat to Alcatraz to claim the Island for the Indians. What was going to happen to the unused Island in the middle of the Bay? Of all the “Third World People,” the Indians had been the least recognized in demonstrations and now they had accomplished a symbolic gesture that sparked everyone’s imagination and created enormous support on the campus and throughout the Bay Area.

It wasn’t until May 30, 1970 that Ilka made it to the Island because she knew no Native American people, but she followed the events in the papers daily. When the occupiers invited supporters to bring bottles of water, Ilka finally was able to see the Occupation herself. With a borrowed Pentax and an old Leica, given to her by her photography teacher, she took pictures of the occupiers and she met the first Indian people, several of whom have remained lifelong friends.

In March 1971, Ilka took a second trip with a small speedboat and several occupiers to the Island. On June 11, 1971, Ilka happened to be at KQED television station when a voice announced over the intercom that the Indians were being removed from Alcatraz. Everyone began to run and Ilka climbed into the VW van of the TV crew and was there to document the events. Soon, her Alcatraz pictures were published in small Indian newspapers and she was invited to Native American events.

This work began Ilka Hartmann’s documentation of Native American life as it is today, in the city or on the reservation, in the family or in political organizations like the American Indian Movement. Since then, she has created many photo essays, including Native Americans in crowded urban communities and on isolated reservations, the activists of the American Indian Movement, portraits of well-known Native Americans and depictions of tribes including the Navajo, Omaha and Pomo. Her images have been exhibited in many countries including the United States and her native Germany and published in newspapers, books and films.

Her website, www.ilkahartmann.com is an archive of all her work.

Stephen Shames went to Alcatraz with his friend and fellow photographer Alan Copeland soon after Indians of All Tribes claimed the Island. He became friends with Richard Oakes and the three of them produced a book, “Alcatraz is Not an Island” with photos and Richard Oakes’ text. However, the book was never published perhaps because Richard’s essay seemed too radical at the time for East Coast book editors.

This photo essay contains photographs taken in 1969 on Alcatraz, plus images from the Kashia Band of Pomo Indians (Annie Oakes tribe) in Northern California; the Ateyapi (fatherhood) Program in Rapid City, South Dakota; the Navajo tribe in Torreon, New Mexico; and the Crow Pow Wow near Billings, Montana.

Kent Blansett is a descendent of Cherokee, Creek, Choctaw, Shawnee and Potawatomi from the Blanket, Panther and Smith families. He is an Associate Professor of History and Native American Studies at the University of Nebraska at Omaha.

Kent is also the executive director for the American Indian Digital History Project, a free site to digitize rare Indigenous publications and ephemera. He has published numerous book chapters and articles including: “San Francisco, Red Power, and the Emergence of an Indian City” and “When the Stars Fell from the Sky: The Cherokee Nation and Autonomy during the Civil War.” He is the author of the first biography about Akwesasne Mohawk Indigenous rights leader Richard Oakes, a key figure in the 1969 takeover of Alcatraz Island by the Indians of All Tribes organization.

Published in 2018, Kent’s book A Journey to Freedom: Richard Oakes, Alcatraz, and the Red Power Movement highlights Oakes’ pivotal role in Red Power activism throughout the 1960s and 1970s. Oakes’ leadership sparked liberation movements at Alcatraz, Fort Lawton, Pit River, Clear Lake, Rattlesnake Island and throughout Indian Country. He is the recipient of numerous fellowships and awards for his scholarship on the Alcatraz Occupation. His next two book projects include a history of the Native American Rights Fund and Red Power and Popular Culture.

Kent’s display, “Not Your Indians Anymore,” is a collection of original artifacts, rare media, never before seen photographs, albums, video, art, comic books and other ephemera that document the history behind the Alcatraz takeover from 1969-1971. Objects appearing in this exhibit are from his private collection, which he has spent the last eighteen years collecting and preserving items related to the Alcatraz Occupation.

Kent’s book is the subject of his exhibit, which provides a rich overview about the history of the Occupation from the early years of Indigenous rights through the origins and legacy of the Alcatraz takeover. Beyond a detailed glimpse into the roots of the Red Power movement as told through media and rare objects, “Not Your Indians Anymore” also investigates the transformative impact the Occupation had on popular comic books from Superman and Batman to modern Native comics like Tribal Force and others.

Similarly, visitors will be introduced to Native Rock N’ Roll artists that lent their talents to creating a soundtrack for the Red Power movement. While strolling through the history of the Alcatraz takeover, visitors can see and listen to rare film footage captured by famed photographers Blaine Ellis and Walter Chappell in the first few weeks of the Occupation. “Not Your Indians Anymore” is a part of the ongoing 50th Anniversary commemoration of the Alcatraz takeover, sponsored by the National Park Service.

Photographer Brooks Townes was living on a sailboat in Sausalito when asked by the Occupation’s organizers if he could round up enough fellow sailors and boats to take 60 Indians to Alcatraz. In the pre-dawn of the next day, November 20, 1969, he could and did…except 93 Indians showed up so two of the three boats had to make two sneaky round trips to “The Rock” without lights in the dark. Seeing no photographers on Alcatraz, Townes suggested to Occupation leader Richard Oakes that he be given permission to return with cameras.

Oakes agreed and for the first nine mornings before sunrise, Townes hopped off the last boat from Sausalito and photographed until mid-morning. When the Coast Guard wasn’t looking, he’d flag a boat ride to Fisherman’s Wharf to provide news agencies in San Francisco with photos illustrating the hot story. To keep from being seen by Federal Officers, watching the Island in the night, a photo flash could not be used. His photos were taken by available light.

Townes believes his are the only news photos of the Occupation’s beginning, prior to Thanksgiving, except for a few when the San Francisco Chronicle and KRON-TV sent cameramen out with Federal Officials around 9AM for an hour or two the very first morning.

Townes worked most of his life as a journalist for daily newspapers and maritime magazines. He is retired in the Pacific Northwest.