Brands » Devour Tours » Meet the People Who Make Us Love Our Jobs: Our Tour Partners 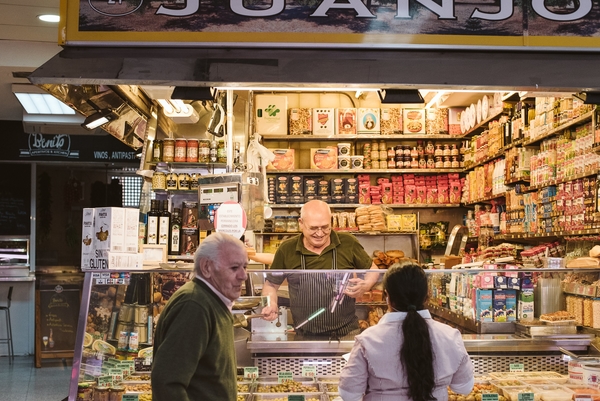 Here at Devour Tours, supporting small businesses isn’t something we do one day a year—it’s a way of life.

Every single day, our tours stop at the shops, bars, restaurants and market stalls that locals love. Not only do we get to try their amazing food and drinks, but we also meet and interact with the people who make the gastronomic magic happen.

Some of our partners carry on proud family traditions that have lasted for generations. Others are savvy entrepreneurs who saw an opportunity to create something their city was missing. Some come from families that have lived in their respective cities for generations. Others have roots in different regions or even countries, and take pride in sharing their culinary heritage with their adopted homes.

But there’s one thing each of our tour partners has in common. These are the people who make our cities what they are—and we’d love for you to meet them.

“The speed and character he shows while serving these tapas is incredible!” Ferran, Devour Barcelona guide

It’s hard to believe that Pepe hasn’t always called Barcelona home—he moved to the Catalan capital with his family from Malaga as a child. But we can’t picture Barcelona’s tapas scene without him. In fact, it’s Andalusian transplants like Pepe who deserve the credit for bringing tapas culture to Barcelona. The concept of tapas didn’t really exist there until less than a century ago!

Pepe has been a fixture at Bar La Plata since he was 13, when he started working there as a dishwasher. Today, he runs the show, still serving the same four tapas (yep, four!) as when the bar opened in 1945. He claims that they’re the only bar in town that can support five families on four tapas.

“The way he keeps smiling every day, even after long working hours at an always-full bar, is just beautiful.” Hannah, Devour Barcelona guide

A menu consisting of four tapas might seem scant, but it’s a testament to the beauty of Spanish and Catalan cuisine. These dishes are simple, they’re timeless, and they’re made with high-quality local ingredients that shine through in every bite. Don’t forget to wash them down with wine straight from the barrel.

Meet Pepe on our Tapas, Taverns & History of Barcelona Tour.

“I love these guys—they are always so welcoming and so generous!” Meredith, Customer Service Manager and Devour Madrid guide

Brothers Luis Miguel and Andrés are two of Madrid’s foremost ham experts, having perfected the art of carving Spain’s top gastronomic jewel from an early age.

They learned from the best: their father, who worked for more than 50 years selling Spain’s finest hams. When he retired, the brothers took over, and the rest is history.

Today, Luis Miguel and Andrés love sharing their passion for Spanish cured meats with their guests. Their shop, Mercado Jamón Ibérico, remains a family business (their cousins are also on staff!) and one of the most authentic places to get your ham fix in Madrid’s city center.

“I’ll always remember the time when they allowed a curious little boy on my tour to have a look at the hams hanging in their otherwise off-limits cellar.” Carolyn, Devour Madrid guide

What’s the secret to a happy, healthy marriage?

According to Enzo and Lina, it’s spending so much time together running a stall at the local market.

We’ll take their word for it. They’ve been together for 50 years, and running La Prosciutteria di Enzo e Lina at Rome’s Testaccio Market for 40.

The market has been a fixture in Rome for decades, but moved to its current location in 2012. Enzo and Lina, along with most of the other stall owners, picked up exactly where they left off after the move.

Their business is a testament to Rome’s everlasting love of incredible deli products, and Enzo and Lina serve only the best from all over Italy. Come for the creamy mozzarella di bufala; stay for the friendly conversation that will make you feel like part of their family.

“I’ll never forget how they came out of the kitchen on the evening of my birthday a year and a half ago with a little cake and a candle, singing happy birthday to me. It made my year!” Miranda, Devour Seville guide

It was 1979, and 22-year-old Enrique Becerra had just finished his then-compulsory service in the Spanish military when his father called him with some unexpected news. He (Enrique’s father) had purchased a restaurant for Enrique to run.

Though not keen on the idea at first, Enrique opened a no-frills restaurant out of respect to his family. He soon discovered a love for preparing and serving dishes inspired by Andalusia’s Moorish past. That’s what put him and his eponymous restaurant on the map.

Seven years ago, Enrique’s son Javier left his job in IT and joined his father at the restaurant. He’s now the seventh generation of restauranteurs in the family, continuing their legacy of using local, seasonal ingredients to create dishes that harmonize the traditional and the contemporary.

“Juanjo from the olives stall at the market is the best—we are Facebook friends now!” Arantxa, Devour Madrid guide

If you thought you loved olives, you haven’t met our friend Juanjo. The owner of one of our favorite stands in the Antón Martín Market eats, sleeps and breathes all things aceitunas.

Juanjo started selling olives when he moved to Madrid in 1957. Just 16 years old at the time, he soon discovered he had a knack for the business, and saved up enough over the years to buy his own market stall in 1989.

You might think that working with olives every day for more than 60 years is a lot. But when you love what you do as much as Juanjo does, it never gets old. On Saturdays, when the market closes at 3 p.m., he takes a container home so he and his wife can enjoy them with some beers.

“He’s always happy, kind and loves to have us there. It’s amazing to see him talking to guests without saying a word in English, and I can assure you they always understand him!” Enrique, Devour Barcelona guide

There’s a little storefront in Barcelona’s Sant Antoni neighborhood that, for as long as anyone can remember, has housed some kind of food establishment.

The area’s oldest residents remember it as a restaurant during the Spanish Civil War, but there are clues to suggest that its culinary origins go back even further. Its roots may be lost to history, but we hope that the business that calls Carrer Manso, 52 home today sticks around for as long as possible.

Current owner Rafael’s father took over the business in the 1960s after moving from Catalan wine country to Barcelona. At that point, it was a bulk wine store known as Bodega Terra Alta after the region the family had just moved from.

When his father passed away in 1987, Rafael took over. He refurbished the place soon after, eschewing the bulk wine model for shelves full of bottles, but it wasn’t until 2003 when he thought it might be time for a name change.

At first, Rafael wanted the new bar’s name to represent the town in the Catalan Pyrenees where he was born. But his wife, María, had a better idea. She knew that Rafael’s customers came back to see him as much as they did for the house vermouth, and insisted that the bar take his name. That’s how La Bodega d’en Rafael as we know it today was born.

“Once, after waiting a long time outside for a group that finally had to cancel, I passed by the bar to let them know, and Rafa and his wife pampered me with a much-needed cup of hot tea. This perfectly summarizes how warm and welcoming they are.” Pamela, Devour Barcelona guide

Meet Rafael on our Tapas Like a Local: Sant Antoni Neighborhood Tapas Tour in Barcelona.

“He’s always smiling and enjoys showing us how to use the porrón!” Ariana, Devour Madrid guide

Jesús is another one of our favorite success stories in Madrid. He went from a teenage errand boy at a different local market to the owner of his very own ham stall at the Antón Martín Market.

Jesús sources his products from the best ham regions in Spain, so you know that even the basic jamón serrano that he sells is going to be good. It’s this commitment to going above and beyond that proves how much he loves his job. We’ve been visiting Jesús for years and can’t remember a time he didn’t have a smile on his face!

These are a handful of our dozens of wonderful tour partners. Our experiences—and our cities!— wouldn’t be the same without them. Stop by and meet them for yourself the next time you’re in town—or join us on one of our food tours to get an introduction from a local.