The Death-Defying History of the Niagara Scow 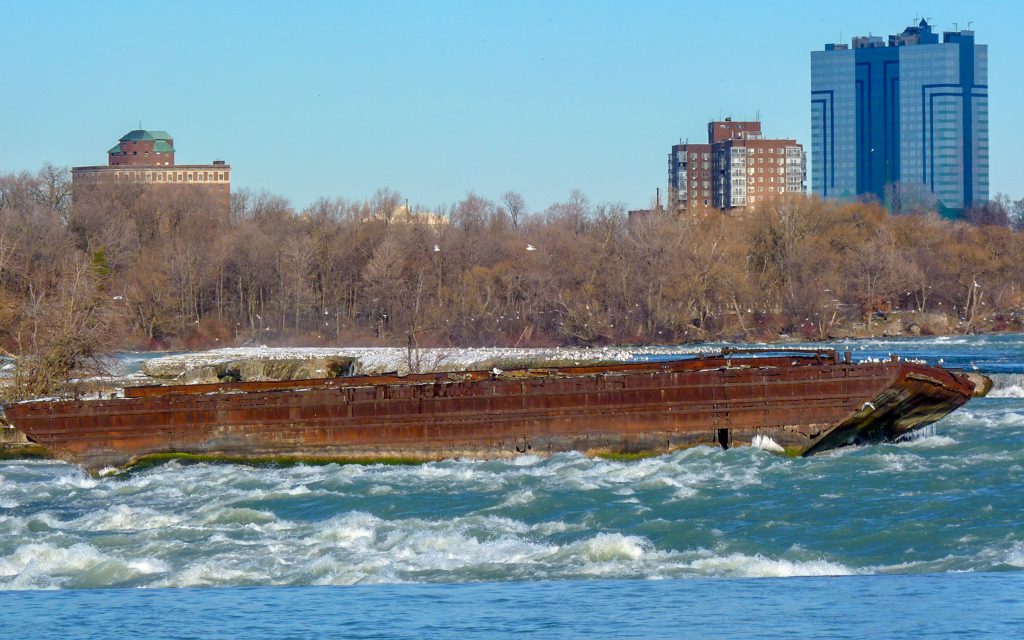 A century ago, Niagara Falls played host to a daring rescue. Two men teetered on the edge of life and death, fighting the force of mother nature herself.
The near-fatal incident and legendary rescue was witnessed by thousands in 1918, and remains an often-told story in the Niagara Falls area. Evidence of this history still sits along the banks near the Niagara Falls. Perhaps you have seen it yourself: The Niagara Scow.

Have you heard the story of the Niagara Scow?

Niagara Falls visitors often ask questions when they see the remnants of this boat wreck. When, and how, did the wreck happen? Did those on the Niagara Scow survive? Why was the scow so close to the powerful Niagara Falls in the first place?
Today, we’re going to share the true history behind the mysterious Niagara Scow.

On a warm summer afternoon, a steel-bottomed sand barge made its way down the Niagara River carrying 2,000 tons of rock and sand. A barge, also known as a scow, is a flat-bottomed vessel attached to a tugboat.
At least…scows are supposed to be attached to a tugboat.
On that day, however, an unpleasant surprise greeted Captain John Wallace and his crew on the Hassayampa tug. The barge hit intense currents about one mile upriver and broke loose of the tug, swaying out of control as it made its way towards the 170-foot drop of the Horseshoe Falls.
Two crew members, 53-year-old James Henry Harris and 51-year-old Gustav Lofberg, were stuck aboard the scow as it inched closer to the edge. What were they to do?

Can you imagine it? James Henry Harris and Gustav Lofberg no doubt felt sheer terror and panic as they sat on the drifting barge. As they headed straight towards the mighty Horseshoe Falls, all they could do was watch and hope.
Hundreds of people gathered to watch the barge make its way through the rapids, but none could help the men aboard escape. The heavy barge was too out of control, and the perimeter was blocked by numerous World War I security measures designed to protect the Niagara Falls’ power station. Onlookers could only stand behind the wall of barbed wire and guards, watching as the men inched towards the horrifying drop.

Less than a half mile from the brink of the Horseshoe Falls, the crowd’s horror turned to relief and delight. In a sweet twist of fate, the scow grounded itself on a rocky shoal. Lofberg and Harris quickly deployed an anchor to secure their spot.
Temporarily safe, the boatmen’s story was not over yet. They had landed on a rock shoal right in the middle of raging torrents of water. There was no easy way for rescue crews to reach the beached men.
What could they do now?

Harris and Lofberg were determined to get ashore, but their options were limited. Desperate, they began ripping timbers from the inside of the barge, creating a windlass.

For reference, below is an image of a windlass – essentially, it is an apparatus for moving heavy weights.

The men hoped that rescue crews could somehow reach a rope line from the shore to their perch. Then, they hoped to secure the line to the barge using the windlass.
Of course, this was a high-risk proposition. The windlass was far from reliable and had not been tested. If the boat were to become dislodged from the rock without being securely connected to a rope, the men risked a potentially fatal descent over the Horseshoe Falls.
It was nightfall before a rope made its way to the two men. The windlass was unsuccessful in moving the scow, so rescuers instead attempted to use the rope to secure a breeches buoy between the watercraft and the power plant.

For reference, here is an 1884 painting showing how a breeches buoy works on a successful rescue mission.

Unfortunately for Harris and Lofberg, the first breeches buoy attempt was unsuccessful. The rope became snarled about halfway through, and as the clock inched closer to midnight, rescuers agreed it was too dark to fix it. The rescue attempt was delayed until the morning light, but searchlights were left on so the men would feel reassured that they were not forgotten.

As the sun rose the next morning, people gathered to witness the spectacle. It remained unclear whether the story of the day would be a triumphant rescue or a devastating failure, but thousands arrived to watch it unfold.
Luckily for the trapped boatmen, the crowd returned home with good news. The hero of the day was legendary riverman William “Red” Hill Senior, who spent hours untangling the breeches buoy and making his way across the water to the stranded men.
Overall, the rescue took 17 hours of trial and error, tangled ropes and a brave rescuer who risked his own life to save two others. Hill was awarded a Carnegie Medal for his efforts.

The Myths and Rumours of the Niagara Scow

After witnessing the narrow escape, onlookers soon began swapping accounts of what happened that day. Some were quite far-fetched –  one particularly outlandish rumour was that the two boatmen had cut two holes in the bottom of their scow to let water enter the vessel and force it to the beach. However, this would have taken too long with the materials on board. The scow landing on the rocks was luck, pure and simple.
There are other stories, however, which may be more rooted in fact. For example, some people swear they saw the two men attempting to control the barge using makeshift oars. Others claimed that they moved some of the load to the front of the scow once it was secured on the rock, in hopes of keeping it steady. We don’t know if these stories are true for certain; all we do know is that whatever Harris and Lofberg did (or didn’t do), it worked out. What could have been a devastating news story was instead a triumph for the people of Niagara Falls.

The Niagara Scow a Century Later

From the barrels used for daring plunges to the postcards of 19th-century honeymooners, most the relics of Niagara Falls history have long since left the famous waterfront. Tourists typically glimpse the past through commentary on Niagara Falls boat tours and museum visits, peering at artifacts through glass cases.

But if you look closely, you’ll find one piece of history still sitting along the banks of the Niagara River: the Niagara Scow.

The story of Lofberg and Harris’s rescue is uniquely extreme, but the history of people risking their lives to generate power at the Niagara Falls is far-reaching. Workplace injuries and even fatalities were not uncommon for power workers, especially in the early days of the Niagara Falls Hydro Plant. After all, an engineering project involving such a fierce natural spectacle as the Niagara Falls is often a high-risk undertaking.
Today, the Niagara Scow is still lodged in those rocks on the fast-flowing Niagara River. It serves as a constant reminder of the risks and the determination involved in harnessing the power of one of the world’s most spectacular natural wonders.