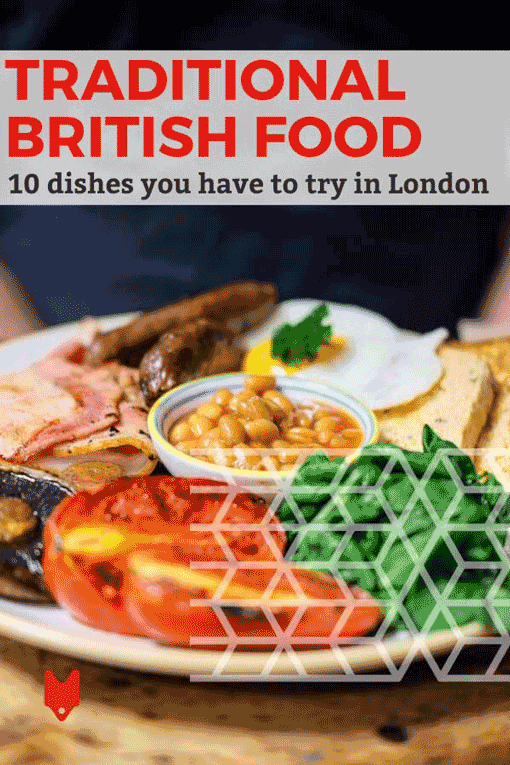 London is a city with an incredibly multicultural population and globe-spanning cuisine. But where can you get the best versions of our most traditional dishes?

Classic cuisine from England gets a bad rap, but these 10 dishes are delicious enough to change anyone’s mind. Discover the best traditional foods in London, and our favorite restaurants where you can enjoy them.

Ask anybody what dishes come to mind when they think of English cuisine, and the same ones will pop up time and time again. However, finding decent versions of traditional foods in London is another matter entirely. Take it from a born-and-bred Londoner—these are the dishes we order and the places we head to when we fancy a little taste of home.

The Top 10 Traditional Foods in London

A culinary relic of our Anglo-Saxon roots, this dish became popular among all socioeconomic classes during the Industrial Revolution. It’s a cuddle on a plate, perfect for the morning after a big night out or to set you up for a long day of work. Head to a classic “caff” and go for the full works: sausage, bacon, baked beans, tomato, fried egg, fried slice and of course, a hefty slice of black pudding.

Where to get it: Terry’s Cafe

Opened in 1982 by a Smithfield’s butcher called (you guessed it) Terry, this old-school caff is now run by his son. It’s the perfect place for the full London experience. Enjoy your full works surrounded by black-and-white photos of locals, wireless radios and Union Jacks…they even do an afternoon tea!

First of all, bangers are sausages, just so we’re all on the same page. They’re called that due to the way they used to explode out of their skins while being fried. The British have loved pork products for ages—ever since the days when we used to gauge the size of a forest by how many swine we could fit in it. Despite recent changes in eating habits, this is still one of the most popular traditional foods in London. It’s best when paired with a pile of buttery mash and an unctuous onion gravy.

Where to get it: Mother Mash

This establishment is so into bangers and mash, they’ve dedicated virtually their entire menu to it. Choose from organic sausages like the classic pepper-heavy Cumberland; the Mother Plucker with chicken, garlic and white wine; or maybe a vegan version. Pair it with your choice of eight different mashes, from the cheese-and-onion-laden Irish Champ to sweet potato. There’s even an entire list of gravy options.

Originating in the East End of London, pie and mash is the absolute cornerstone of working-class cuisine from the Industrial Revolution. Meat pies, fluffy mashed potato, liquor (parsley sauce, not alcohol!) and hey, maybe even some jellied eels. Many pie and mash shops are still housed in their original buildings, providing Proustian moments to Londoners six days a week.

Where to get it: M.Manze

Every local has their favorite spot, but for a proper dollop of history on a plate head straight to M.Manze. Established in 1902 and still run by the same family, this pie shop is the proper experience. Prices are decent and it’s within strolling distance of the iconic Tower Bridge. Continue your foodie experience at some of London’s best markets nearby.

The history of fish and chips reveals a surprising origin story. Fried fish came from the Jews exiled from the Iberian Peninsula during the 1400s, and chips from French-speaking Belgians. The only thing we did was pair them together for the first time. But they became such an important part of the national psyche that they were one of the few things not rationed during World War II. The best place for this dish? An actual fish and chip shop—not a pub!

Where to get it: Brockley’s Rock

A proper community chippie in southeast London, this award-winner is the go-to for those in the know. Order a steaming package of beautiful battered haddock, vinegar-soaked chips and a pickled egg. Want something a little less heavy? Not a problem; these guys grill up sustainably sourced salmon and seabass, make their mushy peas in-house and even provide gluten-free options.

What’s an Italian dish doing on this list, you ask? We hear you…but this is no more authentically Italian than Alfredo. Admittedly, the original Bolognese is a ragu from Bologna. But it tastes nothing like the sauce we heap onto our spaghetti (which is absolutely not the pasta shape it should be paired with). Having left plenty of Italian chefs and tourists wringing their hands in dismay, “spag bol” remains the epitome of English comfort food. It’s usually made at home on a cold winter evening, but there are still places where somebody else will make it for you instead.

Where to get it: E Pellicci

This classic East End cafe is run by an actual Italian family who just happens to know how the Brits feel about their spag bol. They nail a good full English breakfast as well as a plethora of Anglo-Italian pastas. The other patrons have a tendency to burst into song, which is always welcomed.

With a huge South Asian population, London is one of the best places in the world for Indian and Pakistani foods. Chicken tikka masala is the poster child for the Anglo-Indian cuisine that took the country by storm after the days of the British Empire. Rumored to have been created by a curry house in Glasgow, it’s even considered by some to be our national dish. The glorious combination of marinated chicken, yogurt and spices, from garam masala to cumin, is a unique representation of our country’s complex identity.

Where to get it: Punjab

There are literally hundreds of eateries where you can try this dish, and identifying the best Indian restaurants in London can be quite the culinary challenge. We highly recommend Punjab, an upmarket restaurant dating back to 1946. It serves the city’s closest approximation to the North Indian roots of chicken tikka masala.

Did you even visit London if you didn’t spend a few lazy hours enjoying pots of tea, finger sandwiches and dainty cakes? The thoroughly British tradition has its origins in the 19th-century, but is still all the rage for visitors. The best places for afternoon tea in London offer a range of prices (and quality), from luxury hotels to tiny tea rooms and everything in between.

Where to get it: Crusting Pipe

The Ritz it is not, but at £23.95 for the full traditional works—including scones—you can’t go wrong with this offering from the Davy’s wine family. It’s situated smack bang in the market hall of Covent Garden; sit outside to enjoy the classically trained street musicians who play in the courtyard. Shell out a few more pounds and you can even sip on a glass of champagne. All in all, it’s the perfect break from splashing your cash at the many market stalls in the area.

You would be hard pressed to find a Brit who doesn’t feel a nostalgic pull toward our Sunday tradition: a full roast dinner with all the trimmings, surrounded by friends and family. Choose your meat and prepare to be comforted by roast potatoes, veggies, Yorkshire pudding and cauliflower cheese with lashings of gravy. In other words, several of the best traditional foods in London piled on one plate. A glass of red wine and the Sunday newspaper are optional, but highly recommended.

Where to get it: The Gantry

The definition of a typical family-run neighborhood eatery, this house-turned-restaurant is the perfect place to escape it all on a Sunday afternoon. We love its hidden nooks and crannies, not to mention the beautiful secret garden out back. The rare roast beef is out of this world, but make sure you save space for the cheese trolley. The family in charge has a French background, so you can be sure that the wine list is excellent.

To cobble together your own roast dinner at home, check out the recipes in our new digital cookbook!

This is a staple of English snacks: a boiled egg, surrounded by pork meat, coated in breadcrumbs and fried. It’s found everywhere from street food stalls to gas stations. Legend has it that the Scotch egg was invented by the high-end grocery store Fortnum & Mason to be a portable snack for travelers. Whatever its origins, this spherical beauty is a true taste of England, and certainly one of our favorite traditional foods in London.

Where to get it: Ginger Pig

After finding their feet as livestock farmers and manning a stall in Borough Market back in the ‘90s, Ginger Pig has become nothing short of iconic. Any restaurant worth its salt procures their meat from these butchers, who still have a permanent setup at Borough. Take it on good authority that their black pudding Scotch egg is a thing of beauty, and well worth the few pounds it’ll set you back.

Considering that the English are known as the “pudding-eaters,” it’s ironic that one of our most famous puddings is probably not from England at all. In fact, it’s not even a pudding in the classic sense; its preparation is closer to that of a muffin. Sticky toffee pudding was first brought to England by Canadian pilots in World War II. Not that we mind—when a dessert is this good, we’re more than happy to claim it as our own.

Where to get it: Hawksmoor Borough

Known for their rare-breed steaks and thoroughly British ambience, Hawskmoor is also the ultimate spot for London’s best sticky toffee pudding. Laden with toffee sauce and topped with handmade clotted cream, it’s the most indulgent way to finish off a gastronomic adventure in London’s oldest market.

Hungry for more insights into British food and where it comes from? Join Shabby to Discover England’s History Through 10 Dishes on our brand new live experience. You’ll hear about more than 2,000 years of history: royalty and peasants, palaces and slums, empires and invasions… and a whole lot of mouthwatering cuisine. You’ll never look at British food in the same way again!