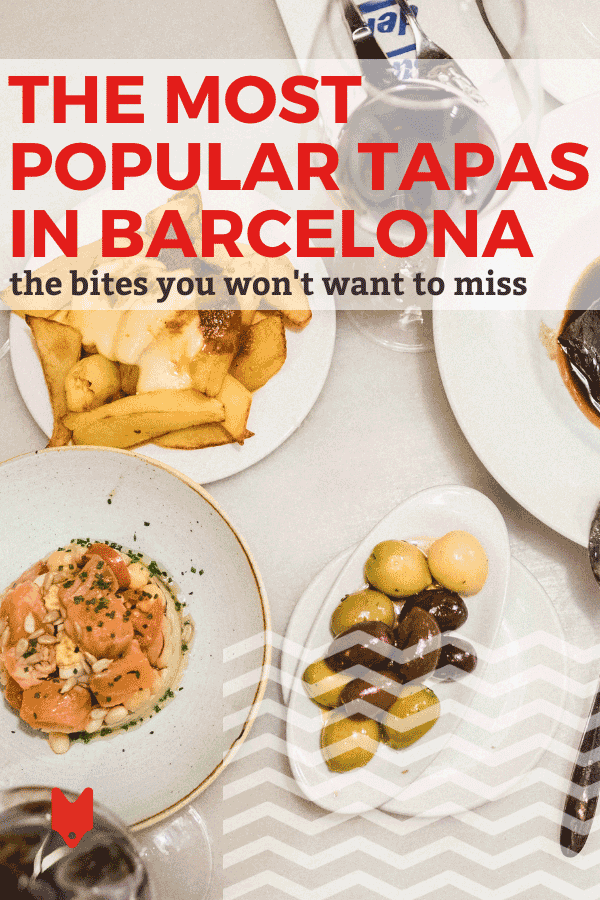 Despite the fact that tapas aren’t native to Barcelona, the Catalan capital has seamlessly adapted them into the local gastronomic scene.

If you come to Barcelona craving tapas, you’re not alone. Tapas are a way of life here in Spain, and have gained popularity abroad for good reason. Though often considered to be small plates, doing tapas in Span is less about the food itself and more about the social experience of sharing it with others.

But what exactly is worth trying? With so many options to choose from, it’s understandable to feel overwhelmed. We’ve done the hard work for you and put together this guide to the most popular tapas in Barcelona that locals love—and so will you.

Tapas in Barcelona: A brief history

Historically, the concept of tapas in Barcelona was quite humble. The original tapas-style bars in the Catalan capital were the old-school wine bodegas, which often served small bites such as canned seafood, cheese, olives and cured meats. Bodegas don’t usually have kitchens, so cold tapas like these were the way to go.

But as migration within Spain became more widespread in the 20th century, thousands of Andalusians made their way north to Barcelona. With them, they brought the concept of tapas that is more commonly known today.

That’s right—we’ve been eating tapas in Barcelona (in their modern form, at least) for less than a century! But in that time, a few bites have made quite the name for themselves. These are the most popular tapas in Barcelona, and the bites that no trip to the ciudad condal would be complete without.

The most popular tapas in Barcelona

Patatas bravas are fried potatoes topped with a spicy “bravas” sauce and sometimes alioli, a garlic mayonnaise, as well. These are probably the one tapa you will find on every single menu in the city of Barcelona. Therefore, you obviously have to try them—but know that not all bravas are created equal.

Read reviews (ideally from locals) of any place before heading out, and make sure to keep an eye out for places that use frozen potatoes, store-bought sauce and the like. Unfortunately, it’s not uncommon for this staple of Barcelona tapas bars to be butchered. But when they do it right? Heaven.

When it comes to cured Spanish ham, remember one thing: not all jamón is the same! On a day-to-day basis, most people eat jamón serrano, which is the most basic of Spanish hams. It’s still pretty good, but if you’re only in Spain for a limited time, you’ll want to go for the best of the best.

If you really want to try the good stuff, keep an eye out for jamón ibérico de bellota, or acorn-fed Iberian ham. This ruby red, melt-in-your-mouth deliciousness is absolutely not to be missed.

Pan con tomate, or bread with tomato, olive oil, and sometimes garlic, is undoubtedly the most simple staple item of Catalan cuisine, and one of the most popular tapas in Barcelona. In fact, it’s all but impossible to order bread in Catalonia that doesn’t come with tomato.

But don’t expect to see this classic only in tapa form! Pa amb tomàquet (as it’s called in Catalan) is a breakfast staple as well, and tomato is also always present on Catalan sandwiches.

One of Barcelona’s most popular tapas, the bomba is a fried potato croquette stuffed with ground beef and topped with the two classic sauces of patatas bravas: alioli and also the bravas sauce itself. This delicious Catalan tapa has its roots in Barceloneta, the old fishermen’s neighborhood of the city. The only hard part is eating just one.

Anchoas, or anchovies, are one of the most popular tapas in Barcelona among locals. Anchovies in Spain traditionally come from the northern Cantabrian coast, or from the Mediterranean coast north of Barcelona.

Even if you think anchovies aren’t your thing, don’t stop reading just yet—Spanish anchovies are like nothing you’ve ever tried, we promise. Try this incredible tapa with a bit of pan con tomate and you might just change your mind!

Pintxos, or the Basque Country’s answer to tapas, have become very popular in Barcelona, with dozens of pintxos bars around different neighborhoods. The word pintxo refers to the skewer that holds the tapa together.

There are lots of different types of pintxos, but most come atop a small slice of bread. Though they are not necessarily as gourmet as ones you’ll find in the Basque Country, pintxo bars are a fun way of enjoying tapas in Barcelona.

Salt cod is a common denominator for many different Mediterranean dishes. And without a doubt, buñuelos de bacalao, or salt cod fritters, are one of the best and most popular tapas in Barcelona. Although there are different ways to prepare them, you can always expect that perfectly salted flavor!

Love great food and want to explore the best authentic and most popular tapas in Barcelona? Then there’s no better way to do that then join us on our evening Tapas, Taverns & History of Barcelona Tour. Dive into the old historical center and explore the city through your senses!