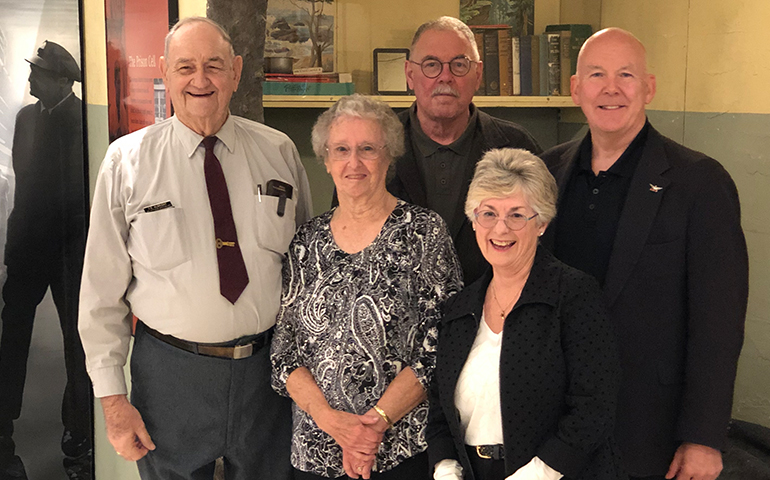 Alcatraz Alumni made what is likely their “last call.” Gathered together for a final public appearance, six former residents of the Island addressed an audience of over 100 guests to chat about life on The Rock.

Amongst the speakers, led by historian John Martini, were former inmate Bill Baker; former guard and last man on Alcatraz Jim Albright; and former residents (civilians that lived on the Island by virtue of their connection to those that worked on Alcatraz) Jolene Babyak, Steve Mahoney, Tom Reeves and Cathy Albright.

This free-to-the-public panel discussion took place at Cityscape Lounge, featuring breathtaking views from the 46th Floor of the Hilton San Francisco Union Square. The intriguing “history lesson” was filled with robust interaction between the Alcatraz Alumni who shared stories about their individual and common experiences on the Island.

Highlights from the discussion

Bill Baker — Former inmate Bill Baker commented, “Now that I am back to the straight and narrow, I go back now (to Alcatraz) and talk to visitors, answering questions about my prison years, signing autographs and taking pictures…I can’t help it if history made me a rock star.” He continued, “I’ve written a book entitled Alcatraz 1259, which I sign and promote on the Island three or four days a week. While I answer lots of questions, the one most often asked is, ‘Isn’t it strange coming back to the prison where you served time?’” Baker says his short answer to that is, “Yes, but they made me an offer I couldn’t refuse.” And, with a grin he added, “So, I’m very happy.”

Jim Albright — Former Alcatraz prison guard Jim Albright served on the Island from 1959 to 1963. He was the last guard off Alcatraz on the fateful day of the prison’s closing. As a 24-year-old, married man and father of a baby, Albright and his family moved from Colorado to San Francisco in 1959 to take his first job as a correctional officer. Albright recalls, “When I went into the (Alcatraz) cell house for the first time, it occurred to me that I was never in a prison before and then I find myself walking into the infamous Alcatraz.” He continued, “When the door leading into the cell house closes behind you, it really gets your attention.” After he got his feet on the ground, the typical workday became a redundant routine, the same thing at the same time…a precise succession, which was only interrupted when a fight, stabbing, assault, attempted murder or attempted escape occurred. He commented, “That’s when things got very busy and exciting.”

Jolene Babyak — Among the many revelations about Alcatraz Federal Penitentiary that surprise most people is that families also resided there. Sixty families lived on “The Rock” and 75 kids were usually in the neighborhood. Babyak commented, “Since the kids went to schools in San Francisco, many of us often only saw prisoners in the summers and usually only in groups of one or two accompanied by an officer.” She continued, “Heck, except for the dock tower, I hardly ever saw a gun. And our fathers, many of whom were from the WWII era, seldom talked about the prison at the dinner table. If there was a stabbing up top, I didn’t hear about it. So, to us, ‘The Rock’ was a low crime neighborhood.” Babyak recalled, “While escapes were sometimes scary and sometimes resulted in the deaths of officers and the departure of families from the Island, at other times they were funny or weirdly baffling or even admirable. All of this made our ‘hood’ an exciting and exotic place to live, despite the sometimes-crappy weather.”

Steve Mahoney — Current President of Alcatraz Alumni Association, Inc. and the son of former guard Pat Mahoney, Mahoney grew up on Alcatraz and he really never felt intimidated. “We were oblivious,” he said. “We were never allowed inside the inner fence line. The only time we were ever allowed inside the inner gate was when we sang Christmas Carols to the inmates on Christmas Eve.” Mahoney continued, ”Families had access to a social hall complete with bowling alleys and pool tables. Once they hit their teens, Alcatraz kids found creative ways to break the law using the unique assets that the island provided.”

Tom Reeves — Son of former Alcatraz physician’s assistant, also named Tom Reeves, Reeves spent his high school years on the Island. He recalled, “We were really good at pool…when you had nothing else to do for hours at a time, you went and played pool.” That’s how these kids learned to pull schemes and cons.” Reeves explained, “There were bars in the Marina and they weren’t real strict…we had federal IDs and the bartenders would let us go in and play pool with Marina guys.” But they weren’t just playing pool, they were playing people for suckers. Reeves continued, “We’d set it up as ‘All I’ve got is a quarter’ or we’d have a tag team where another kid would bet double-or-nothing on a certain shot,” he said. “And then we’d run the table all night.”

Cathy Albright — The young wife of former Alcatraz prison guard, Cathy Albright remembers the drive from Colorado across the Bay Bridge as she, her husband and young baby peered out to the bay for their first glimpse of Alcatraz. They wondered, “What have we gotten ourselves into?” The Albright family lived on Alcatraz for about four years before it closed. They built a deep connection to the Island. Having arrived with just one child, who was born in Colorado, the Albrights went on to give birth to two more children, their daughters, while on duty on The Rock. As a matter of fact, she exclaimed, “Alcatraz is written on the two girls’ birth certificates.”

Alcatraz: Life on The Rock

On display through September 15 at both the Hilton San Francisco Union Square and Parc 55 San Francisco, “Alcatraz: Life on the Rock” is an exhibit that features Alcatraz Island’s fascinating history and infamous inmates. The exhibit showcases the Island’s fascinating history and includes authentic artifacts, interactive displays and a behind-the-scenes look at parts of the Island not normally open to visitors. The experience is perfect for families, students and visitors who love history and want to experience choice items such as a replica jail cell and escape route displays.