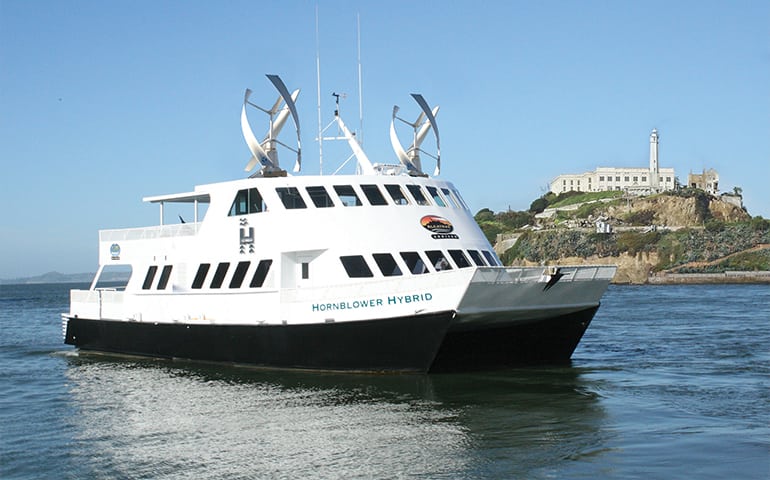 Hornblower Cruises & Events, Alcatraz Cruises’ parent company, boasts the marine industry’s only hybrid passenger ferry fleet in North America. The first hybrid ferry was introduced to San Francisco Bay in 2009 by Alcatraz Cruises, providing transportation to Alcatraz Island in accordance with the company’s concession contract with the National Park Service.
Since that time, the remaining two primary vessels in the Alcatraz Cruises’ fleet have been hybridized, making Alcatraz Cruises the only passenger vessel company in North America with a fleet of hybrid vessels.
The continuing development of marine industry hybridization, as well as hydrogen fuel cell technology, demonstrate Hornblower’s commitment to innovation, marine conservation, environmental stewardship and sustainability.

According to Terry MacRae, CEO of Alcatraz Cruises and Hornblower Cruises & Events, “The Hornblower Hybrid fleet is an example of our company’s goal of becoming the greenest concessioner in the National Park Service. With this Hornblower Hybrid fleet, we are now being recognized as a model of environmental innovation.”
Alcatraz Cruises’ Hybrid fleet uses power generated by ten‐foot‐tall wind turbines and photovoltaic solar arrays covering the awning on the top decks. That power is converted and stored in battery banks that then power the navigation tools, lighting and other electronics on board the vessels. While idle at the boarding locations at Pier 33 and Alcatraz Island, the vessels’ motors use the excess energy that has been stored in battery banks, which allows the boats to drastically reduce the amount of fuel and energy used.
Also, while docked, there is additional power gained by Shore power and this is necessary to charge the battery electric motors. The source of this power is the San Francisco Public Utilities Commission and SF Water Power Sewer, which utilize Hetch Hetchy Power. This is some of the cleanest electricity in the world and is generated from 100% green-house gas emission free sources such as solar, hydro-electric and biogas.
In addition to solar panels and wind turbines, the hybrid fleet has Tier 2 marine diesel engines. These cleaner fuel‐efficient engines are designed to minimize emissions and significantly reduce the company’s overall carbon footprint. The customized drive system allows the captain to monitor the energy needs of the vessel and select the most efficient power sources.
The Alcatraz Cruises’ hybrid fleet has redefined the profile of vessels on San Francisco Bay. As multipurpose vessels within the fleet, these boats ferry visitors to Alcatraz Island and Angel Island as well as taking school groups and other passengers on cruises around the Bay.
Alcatraz Cruises considered several different designs before selecting this particular system. Of greatest importance was the need to build a system that maximized the weather patterns on San Francisco Bay. This vessel system has been designed to be modified as technologies are improved or refined.
Furthermore, as an EPA Green Power Partner, Alcatraz Cruises procures Green-e carbon offsets and renewable energy credits to neutralize its carbon footprint from any additional consumption of fossil fuels and electricity in the operations. This has helped Alcatraz Cruises to support renewable energy projects in North America.

Поделиться статьей
Twitter Facebook
Previous Story This Niagara Falls day trip was named one of the best in the world
Next Story Top 4 Must-Do’s Niagara Falls Canada: A Gay Couple’s adventure in Ontario